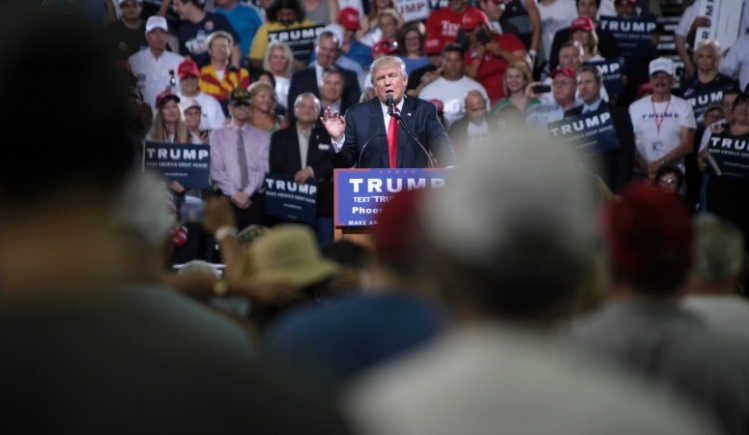 Anyone with confidence in the American people (and I have quite a lot of it) had to believe that Donald Trump's unpreparedness, instability, and just plain meanness would catch up with him eventually. This, as the polls show, is what happened over the last week or so. Simply by revealing who he really is, Trump sent millions of voters fleeing him in disgust.

But understanding what still attracts many voters to Trump is important, not only to those who want to prevent Trump from staging a comeback but also to anyone who wants to make our democracy thrive in the long run. Those of us who are horrified by Trump's hideous lack of empathy need empathy ourselves.

It's certainly true that Trump appeals to outright racists and nativists. He is, first and foremost, the product of a Republican Party that has exploited extremism since President Obama took office. GOP leaders should be called to account whenever they try to prettify Trump by ignoring his assaults on Mexican-Americans and Muslims or a checkered business record that belies his pretensions of being a friend to the working class.

Nonetheless, to ignore the real pain experienced by Trump voters is an even bigger mistake. As a practical matter, we will not ease the divisions in our country his candidacy has underscored if we do not deal with the legitimate grievances of his supporters. As a moral matter, writing off Trump voters as unenlightened and backward-looking is to engage in the very same kind of bigoted behavior that we condemn in other spheres.

Let's begin by disentangling the causes of both Trumpism and the related rise of far-right parties in Europe.

In a timely paper that will be presented at next month's American Political Science Association meeting, "Trump, Brexit, and the Rise of Populism," Ronald F. Inglehart of the University of Michigan and Pippa Norris of Harvard's Kennedy School of Government argue that while there is undeniably an economic element in the ascendancy of the extreme right in the West, the key cause is "an angry and resentful counter-revolutionary backlash" to cultural changes since the 1970s.

They highlight the role of "anti-immigrant attitudes, mistrust of global and national governance," as well as "support for authoritarian values." Voters for the European far right look like Trump backers: "the older generation, men, the less educated, the religious, and ethnic majorities."

So, yes, the new right-wing populism may not be primarily about inequality. But Inglehart and Norris are careful to note that "structural changes in the workforce" and globalized markets may "heighten economic insecurity" and sharpen the negative reaction of cultural traditionalists.

And on the ground, says Rep. Elizabeth Esty, D-Conn., the sense of "disrespect" felt by "people who have lost work to new machines, technology and, in some cases, globalization" is palpable. This is what links cultural unease to economic distress. Esty, whose district includes ailing industrial cities such as Waterbury and New Britain, has been warning Democrats for months about Trump's appeal to displaced workers.

"I do not disrespect the people who support him," Esty said of Trump. "I find him loathsome, but what he has tapped into is real."

Fred Yang, a Democratic pollster, pointed to NBC News/Wall Street Journal surveys showing that voters who say the Great Recession is still having an impact on them are more likely than other voters to support Trump.

And Eric Hauser, strategic adviser at the AFL-CIO, said that both parties need to face the obvious: that "there is a lot of rage in this country."

"People have been angry for more than a generation about their difficulty in moving ahead despite their best efforts," he said. Noting that most policy proposals on behalf of workers are too timid, he added: "There has been too much acceptance on the part of elites, including Democrats, that a little bit of trying is good enough."

Hillary Clinton's campaign is clearly aware of the fury, and she regularly declares that "creating good-paying jobs and raising incomes is the defining challenge of our times." Her endorsement of progressive economic proposals reflects an attempt not simply to draw in Bernie Sanders' supporters, but also to speak to at least some of Trump's sympathizers.

If the country is lucky, Trump will continue to do an excellent job of defeating himself. His racism and sexism are leading non-white voters and women to form a durable front of opposition. But his voters should not be demeaned or ignored, and his rise should shatter the complacency of the comfortable.