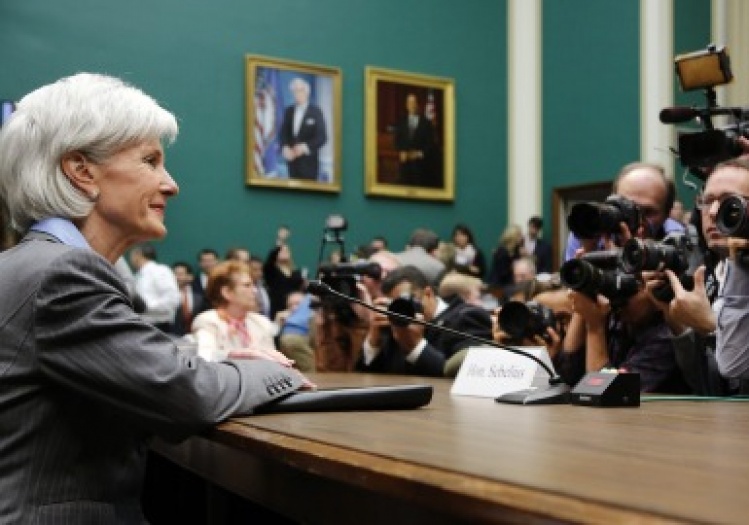 On Sunday, the Obama administration’s self-imposed deadline for fixing Healthcare.gov passed, with seemingly decent results. For the past month, the administration had been consumed with that task. But in the meantime another serious problem seems to have escaped its attention: Federal and state health-care exchanges make it nearly impossible to tell whether their plans cover elective abortion. And in some states customers don’t even have the option to purchase abortion-free coverage.

Last month, Secretary of Health and Human Services Kathleen Sebelius was brought before the House Energy and Commerce Committee to be questioned about the failures of Healthcare.gov. “If someone…has strongly held pro-life views, can you commit to us to make sure that the federal exchanges that offer that [abortion coverage] is clearly identified and so people can understand if they're going to buy a policy that has abortion coverage or not?” asked Rep. John Shimkus (R-Ill.). “I don’t know,” Sebelius answered. “I know exactly the issue you’re talking about. I will check and make sure that is clearly identifiable.”

That was November 1. It’s still nearly impossible to determine whether plans on the exchanges cover elective abortion. For example, on the New York State exchange—supposedly one of the best—the signup process is painless. You create a username and password, enter your legal name, address, Social Security number, and within moments you’re shopping for coverage. You can compare several plans at all levels of coverage (bronze, silver, gold, platinum). Monthly premiums are displayed first, followed by deductibles and out-of-pocket maximums. You can explore a plan’s outpatient-services coverage, its prescription-drug coverage, mental-health services, lab tests, etc. You can even see its pediatric-vision coverage. But you can’t find out whether a plan covers elective abortion.

New York is not alone. The Minnesota Department of Commerce—which regulates insurance—could not tell me how many of the plans on its exchange cover elective abortion. “If you have trouble locating the information through the public filings on SERFF, I would recommend calling the insurers directly,” a spokesperson told me. Same story in Vermont. And it’s no different on the federal exchange. A Healthcare.gov customer-support agent, who—after reminding me that federal dollars won’t pay for elective abortions—explained that the only way to know whether a plan included abortion coverage was to call the insurance companies directly. (Spokespeople for the HHS did not return requests for comment on this issue.)

The exchanges were designed to demystify the process of purchasing health insurance. The law’s complicated mechanisms for handling abortion funding—basically, customers seeking abortion coverage must write out a separate check for that part of the policy—are premised on the customer being able to tell whether the health plan they’re buying covers elective abortion. Unless the health exchanges make it clear which plans cover elective abortion and which don’t, then the ACA’s requirement that insurers segregate abortion funds makes little sense.

In order to remedy this situation, Rep. Chris Smith (R-N.J.) has introduced the Abortion Insurance Full Disclosure Act. The bill, which has the support of the U.S. Conference of Catholic Bishops, would amend the ACA to require all exchange plans to disclose whether they cover abortion, and to “prominently” display that information. It would also force insurers to show both payments a customer would have to make if she chooses elective-abortion coverage.

Transparency on the insurance market was one of the goals of Obamacare. If a customer doesn’t have to call the insurance company to find out whether her child’s eye exam is covered, then why should she have to when it comes to elective abortion? In this respect, the Abortion Insurance Full Disclosure Act ought to be a no-brainer.

Even if Rep. Smith were able to persuade enough House and Senate Democrats to sign on—only 2 of the bill’s 117 cosponsors are Democrats—that wouldn’t address another issue with the exchanges: In some states, all the plans cover elective abortion. As abortion took center stage in the 2009 health-care debate, it became clear that neither side would be completely satisfied with the final outcome. Many members of the prolife movement alleged that the bill allowed federal funding of abortions. Prochoicers thought the law stigmatized abortion. The law allows states to bar elective-abortion coverage from health-insurance exchanges. Twenty-three states have done so (to varying degrees). And in those that have not, the ACA forces insurers to jump through administrative hoops if they want to cover elective abortions. What’s more, the ACA mandates that every state offer at least one “multistate plan” (MSP) that does not cover elective abortions. The Office of Personnel Management (OPM), which runs the Federal Employee Health Benefits, has negotiated more than one hundred fifty of these plans. Only two of them, an OPM spokesman confirmed, cover elective abortion.

So if the Affordable Care Act requires at least one of these plans in every state to exclude elective abortion, then why do some exchanges fail to provide such an option? Because full implementation is delayed until 2017. In 2014, only 60 percent of states have to offer multistate plans—70 percent in 2015, 85 percent in 2016, and 100 percent thereafter.* This means that there are now nine states that have neither banned elective-abortion coverage from the exchanges nor implemented multistate plans: Connecticut, Hawaii, Iowa, Minnesota, New Jersey, Oregon, Rhode Island, Vermont, and Wyoming. Officials in Rhode Island and Connecticut confirmed that on their exchanges customers cannot buy plans without abortion coverage. A representative of Hawaii’s exchange said he thought all plans covered abortion, but couldn’t say for sure. Iowa, Oregon, and Wyoming do offer plans that don’t cover abortion, according to state officials. (Minnesota, New Jersey, and Vermont spokespeople did not tell me whether they offer plans without such coverage.)

Until the MSPs are fully implemented, thousands of Americans will contract for abortion coverage whether they like it or not—or wait until 2016 and pay the tax penalty for not having insurance until then.** Of course, until Obamacare came along, millions of Americans had no idea whether their insurance covered abortion—including members of the Republican National Committee.

The Affordable Care Act is one of the longest, most complex laws ever passed. That’s because it was written to make major changes to one of the largest, most complex markets the country has ever known. Of course it would run into trouble as its many features—and bugs—started to go live. Some of its problems are technically daunting, but others are not. Rep. Smith’s bill doesn’t stand a chance, but there are other ways for people to tell whether exchange plans cover elective abortion. Secretary Sebelius told Congress that she would “make sure” that such coverage would be “clearly identifiable” on the exchanges. Following through on that promise might help her win back some of the credibility she lost in the wake of the Healthcare.gov fiasco. She’d take heat from some prochoice activists, but when it comes to the health-care marketplace, how can you argue with greater transparency?

President Obama could use a credibility boost too. As Obamacare goes, so goes the Democratic Party in 2014. He may not be able to repair Healthcare.gov with a wave of his hand, but he could ask the OPM to target states without abortion-free coverage for MSP expansion next year. And he could certainly direct his administration to make sure abortion coverage is clearly disclosed in the exchanges. Before the president signed the ACA, he devoted a lot of energy to addressing the concerns of prolife Democrats. Without their votes, the Affordable Care Act might not have passed. Supporters of Obamacare owe them a debt of gratitude. So does Obama. It’s time for the president to settle that debt.

* The original version of this sentence misstated the timing of the implementation of MSPs. They will be available in all fifty states by 2017, not 2016.

* * This sentence was corrected to reflect the fact that because the timing of MSP implementation is written into both the statute and the regulations, a regulatory remedy is insufficient.