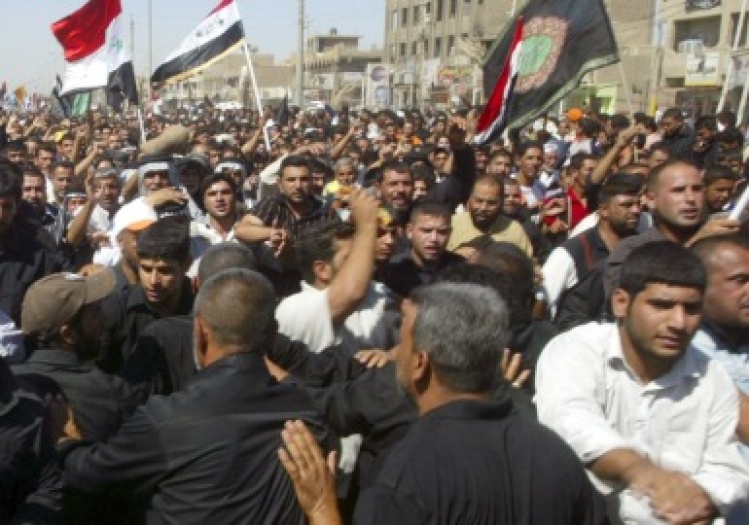 Americans wonder what is going on in the Middle East these days, especially the civil and religious strife that is tearing Syria apart – and, potentially, Lebanon and Iraq along with it. Modern Christians, even Catholics and Protestants in Northern Ireland, have little appetite for going to battle over religious differences. Within the House of Islam, however, ancient antagonisms between Sunni and Shi‘ite Muslims are alive and well; indeed, they are currently devastating the heartland of the religion. What is the source of the division between Sunnis and Shi‘ites, and how prevalent is this bifurcation in the whole Islamic world, a community of more than 1.6 billion people?

That Muslims, and especially Arab Muslims, can be divided by ancient disputes should not surprise us. The late William Montgomery Watt, a Scottish Anglican priest and eminent historian of Islamic thought, once wrote that “for Muslims as for Irishmen history is still alive. The Islamic community is still divided by events that took place in 632 and 656.” Indeed, the factions that we call Sunnis -- 89 percent of the world’s Muslims today -- and Shi‘ites (10 percent) trace the great divide between them to the seventh century and the aftermath of Muhammad’s death. Shi‘ites originated in the faction (shi‘a) devoted to ‘Ali, Muhammad’s cousin and son-in-law, who contended unsuccessfully with Abu Bakr, Muhammad’s father-in-law, to succeed the Prophet in the newly created post of caliph. In the years that followed, continuing intrigues and battles over this succession deepened the rift between Sunnis (those who follow the sunna or path of Muhammad) and Shi‘ites (the partisans of ‘Ali).

This initial rift was compounded over the centuries by a recurring pattern of struggle within Islam between strains of militant puritanism and the less rigorous attitudes of various ruling classes. Such a puritanical ideology arose within Sunni Islam in the fourteenth century, exemplified by the teaching of a formidable Syrian scholar, Ahmad ibn Taymiyya. His doctrine, though popular among many Muslim Arabs in his lifetime, placed him at odds with Muslims of a more laxist point of view. In the eighteenth century in the Arabian peninsula, the reformist teacher Muhammad ibn ‘Abd al-Wahhab used the rigoristic ideas of Ibn Taymiyya to fashion the tradition of strict interpretation of Islamic texts usually called “Wahhabism” by non-Muslims today. To propagate his ideology, Ibn ‘Abd al-Wahhab collaborated with the shaykh of an obscure village in north central Arabia, Muhammad ibn Sa’ud, and between them they imposed unified rule and their new, rigoristic version of Islam throughout the Arabian peninsula. Muslim legal scholars belonging to the family of Ibn ‘Abd al-Wahhab continue to the present day as religious and legal advisers of the House of Sa'ud, the ruling family of Saudi Arabia.

Other Sunni reform movements of a similar puritanical cast arose in India in the eighteenth and nineteenth centuries, as well as in Egypt in the early twentieth century, most notably the Muslim Brethren founded by Hasan al-Banna’ (d. 1949), and the even stricter reformers called “Salafis,” who refuse to recognize any religious developments in Islam after the period of the salaf (the upright ancestors), comprising the generation of Muhammad and the two following generations. Many Egyptian Salafis are, in fact, Wahhabis, but dislike that name for its political connection with the regime in Saudi Arabia. A Salafi political party finished second to the Muslim Brethren in the Egyptian elections of 2011 and 2012, and their chances in the next election may improve if the Muslim Brethren, relatively less conservative, do not manage to retrieve the Egyptian state from its current economic and political doldrums.

The military defeat of ‘Ali in the battle of Siffin on the banks of the northern Euphrates in Syria in 657, and his death at the hands of an assassin four years later, left his descendants as pretenders to the shadow headship of the Muslim world. They and their devotees created what came to be called the Shi‘ite Imamate on a grand scale that grew in religious significance over the two centuries following ‘Ali’s death. Its conception was and is deeply based in motifs of martyrdom. While Sunnis claim that ‘Ali’s son and successor, Hasan, died in bed of natural causes, Shi‘ites consider him a martyr. Ali’s younger son, Husayn, the third Imam in the Shi‘ite lineage, died on the battlefield of Karbala in Iraq in 680 fighting Yazid, the Sunni caliph in Damascus. Shi‘ites annually act out passion plays about the death of Husayn, mourning extravagantly for him, his father, and his entire family. The mother of Hasan and Husayn, Fatima, the wife of ‘Ali, is said to have died in sorrow only six months after Muhammad. Veneration for her in Shi‘ite settings portrays her as a Muslim mater dolorosa. Indeed the descendants of ‘Ali to the ninth century are all believed by Shi'ites to have died as martyrs, victims of oppression by the Sunni caliphate.

ONE CAN TRACE a line from these distant events and antagonisms, with their churning reversals of fortune, to the conflicts of today. At the death of the eleventh Imam in the Shi‘ite lineage, Hasan al-‘Askari, it is said that allies of the Imamate hid his little son from Sunni enemies. Calling themselves the representatives of the Hidden Imam, four of these allies in succession governed the Shi‘ite community on behalf of the Hidden Imam for seventy years. Eventually a military upstart dynasty, the Buyids, originally based in Iran, took on the ideology of representing the Twelfth Imam and imposed themselves in 945 as his representatives -- and as the overlords and protectors of the Sunni caliphate based in Baghdad. Such Shi‘ite military supervision of the Sunni caliphate reduced the caliphate to a puppet dynasty, with only a few partial returns to genuine political power in subsequent centuries. Sunni resentment of Shi‘ites even today consciously or unconsciously recalls this humiliation.

Representing the Twelfth Imam has provided many subsequent Shi‘ites with a symbol for their political aims; the most recent representatives in Iran have been the Imam Ruhollah Khomeini and his successor, Ayatollah ‘Ali Khamenei. Iran since the revolution of 1979 has evolved a totally new definition of the role of representative of the Twelfth Imam, concentrating all powers in the hands of one supreme specialist in Shi‘ite Islamic law, the “Guardian Jurist.” The alliance of the Guardian Jurist with the thuggish Revolutionary Guard has precluded any significant political change in Iran over the past three decades, despite many popular attempts at democratization. (Whether this will change with the recent election of Hasan Rowhani as Iran’s president remains to be seen.)

The comparatively small numbers of Shi‘ites worldwide should not cause us to dismiss them as an insignificant minority. In Iran, Shi‘ites represent 90 percent of the population; in Iraq, 60 percent; and in Lebanon, at least 35 percent. And while only 1 percent of Syrians are Shi‘ites, a Muslim sect called the ‘Alawites, adherents to a Gnostic version of Shi‘ite thought, make up 12 percent of the general Syrian population -- and a much larger percentage of the Syrian army. This large presence of ‘Alawites in the army is a legacy of the French mandate in Syria after World War I, when French administrators, after fighting the ‘Alawites at first, eventually enlisted them into their service -- and ensured their hold on military power when Syria became independent in 1946.

Since 1971 two ‘Alawites, father and son, Hafez al-Assad and Bashar al-Assad, have held the powerful presidency of Syria. ‘Alawite military and political domination has given them totalitarian control. In response, certain members of Syria’s Sunni majority -- more than 70 percent of the population -- have sought alliances with such Sunni powers as Saudi Arabia and Qatar in an attempt to oust the Assad regime. And even though the connection between the ‘Alawites’ Gnostic faith and mainstream Shi‘ite Islam is tangential at best, in recent weeks both Shi‘ite Iran and their southern Lebanese Shi‘ite clients, Hezbollah, have come out in favor of the beleaguered ‘Alawite-dominated government of Syria. Hezbollah, long an antagonist of Israel on Lebanon’s southern border, has turned from attacks across the borders of northern Israel and has taken up arms against Sunni Muslims in Syria. Long dependent on Iran for funding, Hezbollah and its spiritual leader, Hasan Nasrallah, hint darkly about a supposed Sunni jihadist alliance with the Jewish State against the government of Bashar al-Assad.

And so Sunni and Shi‘ite histories remain inextricably linked in the Middle East today, restraining people and politics alike in a kind of stranglehold. Arnold Toynbee once wrote that the Arabic word nahniyya -- “we-ness,” an abstraction derived from the pronoun “we” (nahnu) -- lies at the root of much human woe, and especially the woe manifest in the Middle East, where Europe, Asia, and Africa meet. When push comes to shove in this region, revealing the fragility of the states created after World War I, protagonists revert to identities of ancient vintage: Sunni and Shi‘ite, first of all, but also ‘Alawite, Maronite, Melkite, Druze, Copt, Chaldaean, and last but not least, two larger polarities, Arab and ‘Ajam (non-Arab), Jew and Gentile.

To what extent are these divisions genuinely religious, and to what extent do they incarnate the persistent human orneriness that continues to express itself in terms of ancient rivalries and their symbols? I am not sure how to answer these questions. I am certain that the history of the Middle East before modern times, and especially its many religious and cultural polarities, demands far more attention than it has received from policymakers in the United States since World War II. In the absence of such study, simple-minded analyses of contemporary Syria and its neighbors by war-mongering journalists and politicians threaten to plunge the United States into another debacle like the wars in Afghanistan and Iraq. Reconsidering the borders established in the Middle East after World War I will require much painful overcoming of established prejudices.

The Northern Irish poet Seamus Heaney knows all too much about the long-simmering history of prejudice. These lines from his verse drama, The Cure at Troy, a re-telling of Sophocles’ Philoctetes, might give us something to meditate on in today’s religiously divided Middle East: “History says, Don’t hope/On this side of the grave./ But then, once in a lifetime/ The longed-for tidal wave/ Of justice can rise up,/ And hope and history rhyme.” There is so much at stake. To paraphrase T.S. Eliot’s observation in Four Quartets, History can be servitude, but it can also be freedom.