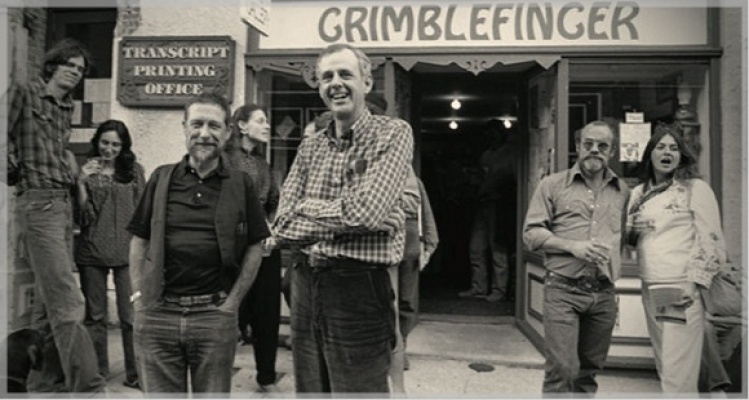 In a correspondence spanning forty years, from 1973 to 2013, Wendell Berry and Gary Snyder spend much time writing about the weather. “Our weather this spring has been generally bad,” writes Berry in one early letter from his farm in Henry County, Kentucky, “cold and wet, with enough unseasonably warm days to start the trees budding too early.” Responding from his homestead in northern California, Snyder describes some spring “mountain weather—a sudden snow fall right now—big flakes.” For most people, weather talk has become a mere pleasantry. For Berry and Snyder, though, it reflects a shared commitment, one that animates their daily lives, poetry, essays, activism, and friendship. In a blurb for Berry’s 1977 classic The Unsettling of America, Snyder describes it as a commitment to “living well, in place, on the land.” For “distant neighbors” that share such a commitment, descriptions of weather, the landscape, flora, and fauna offer the means of better imagining each other’s lives. As Berry writes in a poetic letter, “Here beside the Kentucky River, with songs all around us of the sycamore warbler, cardinal, indigo bunting, Baltimore oriole, wood thrush, robin, and song sparrow, we are thinking of you, dear friends, and wishing you well.”

Snyder and Berry emerged from the branch of the counterculture that put down roots—that went back to the land, started intentional communities, and read the Whole Earth Catalog. Snyder was born in 1930 on a small dairy farm in the Pacific Northwest. He studied English and anthropology at Reed College before moving to San Francisco, where he quickly became an important figure among the Beats. He was one of Jack Kerouac’s “Dharma Bums,” and he read at the same 1955 event where Allen Ginsberg publically debuted “Howl.” Snyder soon left the United States to study Buddhism in Japan, though, and he wouldn’t settle in the United States again until nearly fifteen years had passed. Then he and his young family joined some friends in the Sierra Nevada foothills and built a homestead they called Kitkitdizze. Drawing on Eastern practice, Native American traditions, and ecology, Snyder developed a distinctive life there and a distinctive style as a poet and essayist, one that received national recognition in 1974 when his collection Turtle Island won the Pulitzer Prize.

Berry was born in rural Kentucky in 1934. His father was a legal advocate for small farmers, a cause he would pass on to his son. After earning his undergraduate degree from the University of Kentucky, Berry studied with Wallace Stegner at Stanford, where he was part of a remarkable creative-writing cohort that included Ernest Gaines and Ken Kesey. Berry arrived in California in 1958, shortly after Gary Snyder had left for Japan. (In his helpful introduction to this volume of letters, Chad Wriglesworth notes that Berry bought Snyder’s 1959 poetry collection Riprap at City Lights Bookstore, but their correspondence did not begin until the early ’70s, when the editor Jack Shoemaker—now at Counterpoint Press—facilitated their first interactions.) After graduating from Stanford, Berry taught at New York University for two years, but in 1964 he and his wife Tanya decided to return to a position at the University of Kentucky. A year later they purchased a small farm—Lane’s Landing—in Berry’s home county. Berry’s writings drew on agrarian political traditions, early advocates of sustainable agriculture, and the collective memory of his rural Kentucky home. Nathan Coulter (1960) and The Broken Ground (1964) established him as a novelist and poet, respectively, but his critique of industrial agriculture in The Unsettling of America made him one of the country’s leading social critics.

As these letters attest, putting down roots did not mean that Berry and Snyder withdrew from the concerns of the wider world. Both became more vocal on environmental and social issues. In one letter Berry writes, “I am, I believe, a ‘non-violent’ fighter. But I am a fighter. And I see with considerable sorrow that I am not going to get done fighting and live at peace in anything like the simple way I once thought I would.” Both writers felt the tension between their commitment to a place-based way of life and the travel schedule of a prominent writer (the speaker’s fees helped to finance that place-based life, of course). Berry wonders at one point, “how much of my involvement in what I don’t like (internal combustion, air travel, etc.) is necessary, and how much is just inertia or self-indulgence?” These trials and tensions also unite the two authors.

But despite their considerable common ground, they do not always see eye to eye. Snyder playfully notes that “clearly you are pro-agrarian, and I am pro-hunting and gathering, which only shows I am even less credible, in the twentieth century, than you are.” Real differences do occasionally surface in their respective ecological commitments. In perhaps their most tense exchange of letters, Snyder defends the deep ecology movement against what he sees as Berry’s unfair caricature of it as misanthropic. This involves a disagreement on population control. Snyder writes, “I don’t know anyone who seriously hates his species, but that does not mean we cannot responsibly take on the task of defining an optimum world population (about one tenth of the present) and think of the moves that would lead, over the decades, in that direction.” Berry balks at this line of thinking, claiming that it could be easily co-opted for repressive and even genocidal aims. He sees population growth as a thorny problem but ultimately one “secondary to those of use, consumption and pattern,” concluding that “from a human or humane point of view, all who are alive are necessary.”

Perhaps here but certainly elsewhere Snyder’s and Berry’s religious differences lead to disagreement. While Snyder draws on Buddhist philosophy and practice, Berry seeks to articulate a Christian ecological vision. This was a timely but controversial task in the late 1960s and ’70s, when many leading ecologists (and quite a few Christians) thought that the Bible countenanced complete human dominance of creation and thus rapacious exploitation. Snyder is at times skeptical of Berry’s ecological reading of Scripture, claiming that his own “problems with Christianity are two: One is basically theological, the place in the Bible where the Lord says the living creatures of the earth are ‘meat’ for our use; and the distinction from the beginning which is hardened into dogma by the church, between creator and creation.” Berry takes up these critiques in some of his longer letters, claiming at one point that “the book of Job is a ferocious indictment of the assumption that the world is man’s meat,” and at another point taking aim at one of Snyder’s statements about the “ideology” of monotheism: “The allegation of uniformity becomes uncomfortable, it seems to me, in the presence of almost any pair of examples you can name: Jesus and Mohammed, Dante and Chaucer, Eliot and David Jones, Billy Graham and E. F. Schumacher, Dorothy Day and Jerry Falwell, Thomas Merton and the pope.”

These disagreements are never marked by malice, though. They are animated instead by a spirit of mutual respect and good will. Snyder and Berry are always forthright, calm, and charitable. In this sense, their letters are a model for interreligious dialogue in particular and serious discussion in general. Snyder and Berry clearly appreciate their common ground, but they do not shy away from their differences. As Berry writes at one point, “I think it would be both surprising and disappointing if we agreed more than we do. If we agreed about everything, what would we have to say to each other? I’m for conversation.”

In the end, the sense of generosity and gratitude that pervades these letters is another shared commitment, and it is a particularly important place where their religious sensibilities overlap. As poets and essayists, in works like Berry’s The Gift of Good Land (1981) and Snyder’s The Practice of the Wild (1990), both writers have advocated a stance of gratitude toward the world, a way of seeing it as gift. This view is not as naïve as it might sound. It does not involve denying trials and tragedies. To hold that the goodness of life is a gift, after all, is also to acknowledge that it is not owed to us. Both writers think that gratitude is in markedly short supply. Snyder claims, “There are no people anywhere who don’t act hastily and with less than adequate gratitude—most of the time—East or West...” This emphasis on gratitude and gift is perhaps their most valuable lesson for everyday living, and it is their most fundamental critique of the contemporary capitalist order, which seems to amplify the ubiquitous lack of gratitude noted by Snyder.

Those new to Berry and Snyder will first want to read some of their other works, perhaps Berry’s novel Hannah Coulter (2005) or Snyder’s poetry collection Axe Handles (1983). Those already familiar with their writings will find much of interest in this remarkable record of two important contemporary writers’ “long-distance friendship.” Chad Wriglesworth has done us a service in making these letters widely available.