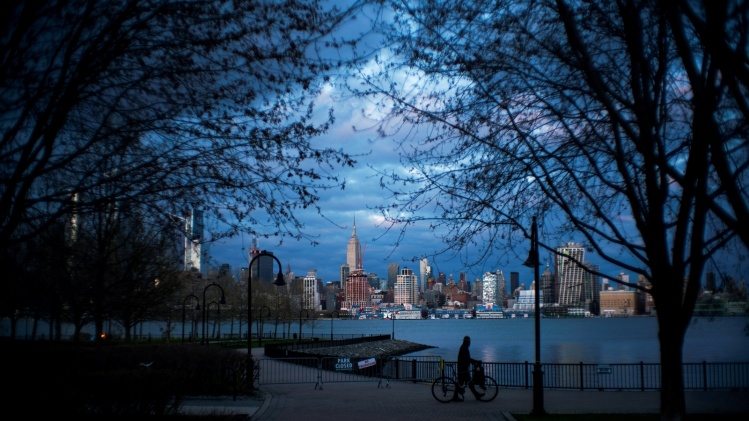 According to New York by the Numbers, as of March 16, there were almost 5,500 people in Rikers. Of these, about three-quarters are pretrial detainees. “As a former correction officer at Rikers Island,” writes Ralph Ortiz for the Independent, “I can tell you that the island is one of the filthiest places you will ever see.” Like other reporting on Rikers, including from Mother Jones, Ortiz concurs that there is not enough soap, that inmates are crowded. He draws from this a dispiriting conclusion: those people need to be kept in. They are too dangerous, disease-wise, to be let out.

Whatever prisons are meant to be, they largely function for this purpose: to keep people free from a sense of contamination. They claim to shield society from conditions that are then generated within the prisons themselves on a massive scale—violence, rape, and, in this case, disease. The hellishness of prisons becomes proof that the people they hold belong there. But unlike hell, prisons are not places governed by a just and all-knowing God. Inmates are placed there for arbitrary reasons for arbitrary lengths of time and suffering that bear no real relation to their crime.

Social distancing asks a lot of us, but perhaps what it asks that is hardest is that we try, as best we can, to distinguish distance from desertion. Public health currently demands that many people will, quite literally, die alone. Against the backdrop of this deprivation, it might seem like keeping people in prisons is just asking them to do their part, too. But the imprisoned people across the country are not being asked to sacrifice on behalf of others. Instead, the conditions in which they live are held against them, as if they created them. But they didn’t; we did.

We need to let the prisoners out. It is the right thing to do. The alternative is thousands of people dying totally and intentionally abandoned. We need to let them out, get them treatment if they are sick, provide them with a clean and safe place to shelter. This is a moral duty. It is very simple, like most moral duties are, and like most things that have to do with this disease are, but that does not mean that anyone is going to do it. “I had to lie on the floor in intake with about seven other people, not within six feet of each other, but six inches,” one inmate told ABC News. Nobody could deserve this. On April 5, the first inmate at Rikers died. He was there on a parole violation.

Watching a streamed liturgy is unbearably painful, like looking through the wedding photos of someone who didn’t love you back.
sharetweet

When I first started going to Mass, I would walk to the old Italian church nearest my home and sit in the back. The church is extravagantly beautiful, but sparsely attended. I would sometimes spend my time looking up at the Station of the Cross nearest to me (Christ falls the second time). I was unsure if I wanted to be there. Behind me were two saints surrounded by flickering electric candles. One was St. Anthony, easy enough for me to identify. The other was a man with a little dog, pointing at his wounded leg. He was St. Roch; I’d never heard of him.

When it comes to plagues, saints are often the ones we see rising to the occasion. It’s saints who are unafraid to embrace lepers; who drink the water in which they wash pus from the wounds of the sick. It is also saints who comfort the prisoners. Roch, a fourteenth-century son of a wealthy family, ministered to victims of the plague until he contracted it himself. He retreated to the wilderness, where a dog brought him bread until Gotard, the dog’s wealthy owner, followed the dog and found him. Roch eventually recovered and traveled to Lombardy, where, taken for a spy, he was thrown into (as The Golden Legend puts it) “a hard and strait prison,” where he died five years later.

Why preserve Roch from plague but not from prison? This question is one Roch presumably never asked, but it’s hard not to, as it is with many stories in which God intervenes dramatically to save a person from one fate but not another. (Why spare Catherine of Alexandria from the wheel only to allow her to be immediately beheaded?) Perhaps to be imprisoned was, like exposing oneself to disease, a form of unitive suffering. Maybe the point of the story is that other people can be crueler than disease. Or maybe there simply isn’t a way to answer or even truly ask the why; what happened happened and is left to us to understand or take comfort from. Saints do not mean just one thing.

Roch’s near contemporary was Catherine of Siena, who never much wanted to be around her neighbors. God deprived her of her solitude. It was God who had her step out into the world; God who tells her that “love of me and love of others are inseparable,” that “every virtue of yours and every vice is put into action by means of your neighbors.” God tells Catherine that “those who are willing to lose their own consolation for their neighbors’ welfare receive and gain me and their neighbors.” So Catherine went out.

Maybe Catherine would have had her own seesawing relationship with action and solitude even without God’s directions. It is hard to imagine a version of her life where she does not inject herself into disputes. Still, if she were shut in her room during a plague she’d certainly be making the most of it, chewing her handful of leaves a day and beating herself, sleeping on the floor and praying ceaselessly. There’s always something to do. The saints are the people with the love that puts them on the line. But there have also been plenty of saints who did not leave their rooms.

When God talks to Catherine about people who prioritize their own consolation over their neighbors, he means people who prioritize routine prayer over helping people who they see are in need. But maybe this counsel can be inverted for our time: one cannot seek the consolation of bold action if it’s simply not what’s required of you. Many people will not emerge from this time as heroes. They are not doctors, delivery workers, grocery-store cashiers. What they’re being asked to do is small and humiliating: Stay inside. Give money where you can. Figure out a safe way to be there for your neighbors. Wear a mask. Try not to put strain on supply lines. Tip heavily on delivered food. Pray. There is no heroism in this, but it is what you can do.

Tactility has always been one of Catholicism’s selling points, but now I cannot even receive Christ in the Eucharist, much less dip my fingers in holy water or click a little button to “light a candle.” Watching a streamed liturgy is unbearably painful, like looking through the wedding photos of someone who didn’t love you back. You can pray to Roch anywhere, but it is only in the church next to his statue that I can see him and his funny little dog, that we can share the same space.

I thought I had already made my peace when it came to the microbial world that lives on, inside and around me, with the knowledge that every surface I touched was a rich landscape I would never see or understand, that the slightest human contact involved a kind of breach of defenses. There was a lot of beauty to this. I do not believe in fearing other people, even dangerous people, or diseases, even dangerous diseases. But now it is no longer my own vulnerability I’m supposed to accept, but my danger to others.

Still, here is what I ask myself, as I sit in relative comfort: How does one recover, in this time, this kind of ecstatic, welcoming faith of the body, the love of God and neighbor that understands that the sick must be visited, the dead buried, hands held, brows mopped, that to be alone is not just a condition of life but an active hardship, that no one should die alone? If you cannot visit the prisoner or the sick—cannot even visit the dying—where is the space for these acts of love? Why is it that the best thing I, personally, can do feels synonymous with indifference?

Contagion exists, potentially, in every handshake, every present, every train ride; contagion exists in picking up something you saw someone else drop, in stopping to check in on an elderly friend, in lending a book, in hugging someone whose heart is breaking. I find myself haunted by onions I have picked up and then put down in the grocery store. Where did they go? (Then, regarding the onions I did bring home: Where have you been?) Watching people touch in movies and television is agonizing. Don’t they know what they’re risking? They do and they don’t.

All the same, when I walk around my neighborhood, I do not think I live in a fearful city. The streets are empty and the people out walking are mindful of each other. In the grocery store people coordinate entering aisles. At 7 p.m. we clap for hospital workers. Most of the people I see are wearing masks. We may not be heroes, but we can take care of each other. In the carefully maintained gaps between one person and the next what stretches across is not just a virus; it’s love. It is not the same thing as holding somebody’s hand. But it’s love.

And we can continue with this love, a perfect love that casts out fear, with a distance that embraces rather than refuses responsibility. We can be not afraid; we can release the prisoners. Let them out. Risk this, because it’s the just thing to do. Risk this, because we can be close to each other, we do not have to desert each other, we can stand by each other. Do not be afraid. We are not alone. The angel of the Lord is always at hand. 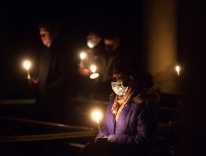