‘We Measure the Earth with Our Bodies’
By Melody S. Gee
Fiction
Asia
Immigration 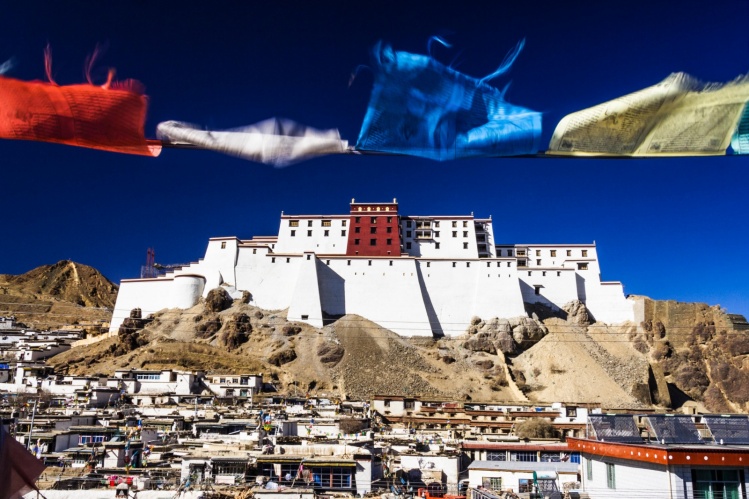 Pilgrimage through prostration is the ancient Tibetan practice of traveling the earth one body-length at a time. Author Tsering Yangzom Lama explains the ritual during an interview with the University of British Columbia’s Himalaya Program: the pilgrim lies prostrate with arms stretched overhead, rises, then lies down again, placing her feet where her fingers had marked the ground. In this way, Tibetans traverse the earth around a holy site or across the entire country, connected to the land that holds gods, spirits, history, and their very identity.

As described in Lama’s debut novel, We Measure the Earth with Our Bodies, prostrations were a daily ritual in Tibet before the Chinese invasion and occupation. For her protagonist, Dolma, feeling the earth of her ancestral homeland is only a distant dream. Born in a refugee camp in Nepal, she has never known the land her family left behind. “To measure the earth with my body,” Dolma yearns, “to know our country with my own skin. It seemed like the only way to fathom such a land.” Tibet’s landscape of plateaus, red mountains, and vast caves is as much a living character as the book’s three female narrators—preteen sisters Lhamo and Tenkyi, who survive a brutal exile from Tibet, and Lhamo’s daughter, Dolma, whom we meet fifty years after her mother’s family became stateless refugees.

In 1960, after years of militarized occupation and with the Dalai Lama in hiding, Lhamo and Tenkyi are forced to flee with the rest of their village. The Chinese have banned all religious practices, systematically tortured Tibetan nuns and monks, razed monasteries, and appropriated natural resources. “They will not be satisfied with our land,” the girls’ mother warns. “They want to possess our minds.” As Lhamo and Tenkyi head south toward Nepal, another elder declares, “We cannot kill our enemies. We should do what our ancestors have done. Bury our things safely in the earth and leave until this madness ends.” Many do secure their last possessions underground, as if in the hands of a trusted loved one, before departing. The villagers bring only essentials. Most important is a statue, less than five inches tall, saved by a village elder from the ruins of a looted monastery. Sculpted from mudstone—the earth of their seized homeland—the skeletal figure wears a loincloth and looks skyward with a pained expression. The girls’ mother recognizes it immediately: a nameless deity carved in a human image that healed her long ago and is known to “disappear and reappear as if by its own will. When the time is right, the Saint comes to those who need protection.” The saint wanders, stateless as the people it blesses, bearing the entirety of Tibetan culture in its small figure.

By the time they reach their final refugee camp in Pokhara, Nepal, the sisters are orphaned and shattered. Though they have finally stopped moving, their lives are in no way settled. Severed from their people, culture, religion, and ancestral land, their camp is also isolated from Nepalese society, leaving them without a sense of place to even begin building a new life. This is the devastation of forced displacement—the erasure of past, present, and future. Despite everything they’ve lost, Lhamo and Tenkyi forge a life in the camp with relatives and neighbors. All the while, the Nameless Saint watches over the camp, blesses the waters, heals the sick, guides prayers, and keeps them safe. While he is near, there is a shred of hope: “One quiet day, we will walk back to the elevated land of our home, kneel down, and dig. And our lives will reemerge, unsullied by the bloodshed and sadness of the world. And the Bhomi, the People of the Snows, will live again as we have for thousands of years.”

Decades later, long after the Nameless Saint has gone missing, we meet Lhamo’s daughter, Dolma, a university student living with Tenkyi in Toronto and eager to become a scholar of Tibetan studies. Dolma is untethered and in-between, a stranger to her homes in both Tibet and Canada. Her mother remains in the camp scratching out a living and hardly able to bear their separation. In Toronto, Dolma reflects that the city “is the camp built anew…a copy of a copy of home. Another temporary stop in an endless journey.” By this time, the Tibetan diaspora have waited and languished for over sixty years, wondering how the world has forgotten about them. “In the 90s the Tibetan cause was trendy, popular,” Lama says in the University of British Columbia interview. “We had the Tibetan Freedom Concert, Free Tibet stuff everywhere. Then, the West decided that China would be a major trading partner.”

Relationships are what remain to bind and ground stateless people.
sharetweet

It is Dolma who encounters the Nameless Saint, across an ocean and after all these years, in the home of a wealthy collector. At a party filled with well-traveled and supremely confident academics, Tibet becomes a subject of Western research and analysis, as Dolma’s professors hold forth on tourism ethics, mimesis, and metaphysics. But for Dolma, the goal of becoming a scholar is not to acquire knowledge. She studies history as a way to return home. “I want to be close to them, closer than even prayer can bring me. I want to be near to these saints in their time, in their world.” She is stunned when the keeper of the collector’s art estate sneaks Dolma in to see the family’s latest acquisition, a small mudstone figure with an expression of “devastating sorrow or blinding confusion, or perhaps even ecstatic revelation.” There is no going back from this moment thrust upon her: “It’s clear that my life has changed forever. The Nameless Saint has come to me and braided our fates together. Whether I find a way to bring him back to our camp or do nothing, I will never be able to move on from him.”

As Dolma makes an irrevocable choice about the Nameless Saint, the narrative pulls us back to her mother and aunt’s youth, and the novel’s two timelines begin moving toward each other urgently to reunite all these separated lives. We see the saint heal young Tenkyi of pain, seizures, visions, and voices, before she departs the camp for school in a faraway city. Meanwhile, young Lhamo enters a difficult marriage while emotionally tethered to the young man who had arrived at the camp with the saint. This young man is the novel’s fourth narrator and he too remains connected to Lhamo across years of travel to broker his people’s relics and artifacts. With sections titled “Daughters,” “Sisters,” “Lovers,” and finally “Self,” the novel asserts that relationships are what remain to bind and ground stateless people.

Ultimately, Dolma must answer a call to return home to her mother and embark on an impossible journey toward the closed and heavily guarded border of Tibet, the home she has never seen but has fought for all her life. A third generation in exile, she draws nearer to the plateau that holds her gods, her ancestors, and the lives her grandparents and mother left behind. On Dolma’s trek home, distinctions—between human and gods, present and past, destiny and choice—collapse in and around her, body and land shimmering with holy mystery. She must find a way to carry every scattered piece of her family alongside her grief, survivor’s guilt, and hunger for both the past and wide-open future.

We Measure the Earth with Our Bodies asks: How do we live without home? Every character faces this dilemma unflinchingly, fully alive in prose rich with yearning, emotional depth, and courage. Out of the harshest landscapes and oppressions, the novel excavates exquisite tenderness. The power that Lama’s characters possess goes beyond the ability to merely survive. These refugees who cannot measure the earth with their bodies must instead hold distances in their hands: “The distances we’ve traveled. The distances we dream of. For those of us who cannot return home, all the world is a dream.”

We Measure the Earth with Our Bodies
Tsering Yangzom Lama
Bloomsbury Publishing
$24.30 | 368 pp.