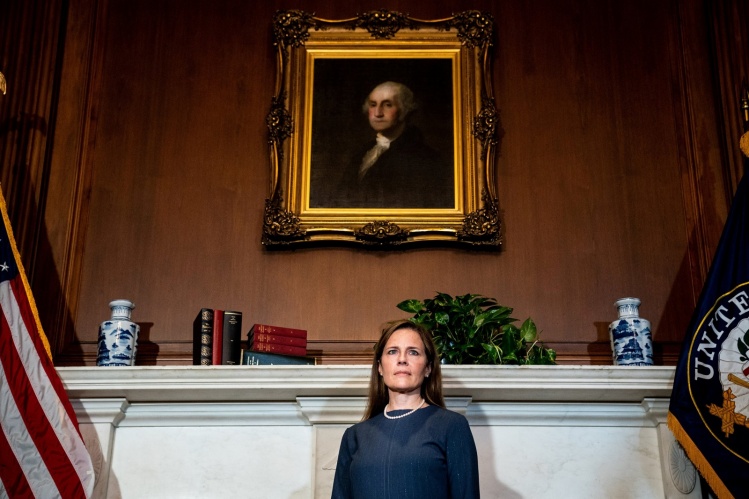 If confirmed by the Senate, Judge Amy Coney Barrett will become the sixth conservative justice on the Supreme Court, likely ensuring a solid right-wing majority on the court for many years to come. For that reason, it is imperative that the Senate set aside the partisan passions of the moment and reflect on what Barrett’s nomination might mean for the future of the court and the nation.

In her White House speech accepting President Trump’s nomination, Barrett stated that Justice Antonin Scalia’s “judicial philosophy is mine, too.” A look at her extensive academic scholarship, however, reveals a very different picture.

Barrett served as a law clerk for Scalia, a conservative. Like her mentor, she takes an “originalist” approach to legal interpretation. Originalists claim that written legal texts, including constitutions, must be interpreted according to their original meanings. In this view, the Constitution is not a “living document” that adapts to changing circumstances and evolving values. Its meaning is fixed when it is adopted, and is considered binding law until formally changed or repealed by amendment.

Also like Scalia, Barrett embraces a particular brand of originalism, now fashionable in conservative legal circles, called “public meaning originalism.” According to this view, the meaning of a legal text is not determined by the intentions or purposes of its authors or adopters, but rather by its public “textual” meaning. What matters is the law’s conventional or ordinary meaning in context—how a typical informed reader of the time would have understood it—not the expressed or unexpressed “intent” of those who wrote or enacted the law.

On these basics Scalia and Barrett agree. But they have very different views on the critical issues of judicial restraint and respect for legal precedent.

For Scalia, the central virtue of originalism as a method of interpreting the Constitution is the way it limits judicial policymaking by unelected and tenured judges, thus honoring the basic democratic values of our constitutional tradition. By contrast, Barrett argues that it was a mistake for “early originalists” such as Scalia to stress the importance of judicial restraint. In her view, the original textual meaning of the Constitution is the law, period. Originalist judges have a sworn duty to uphold the law—even if that requires activist rulings, which may be deeply unpopular and invite frequent collisions with Congress and other democratically accountable legislative bodies.

In Barrett’s view, the original textual meaning of the Constitution is the law, period.
sharetweet

One clear example of this activist bent is Barrett’s rejection of the long-standing view that courts, in interpreting statutes, should view themselves as “faithful agents” of the relevant legislative bodies. Since lawmaking powers have been granted to legislatures, not courts, in our constitutional system, judges have been seen as properly playing a subordinate role in furthering and implementing the rule-making prerogatives of legislatures. Barrett once accepted this traditional view, but recently renounced it in a 2017 article “Congressional Insiders and Outsiders.” When interpreting statutes, judges should see themselves as “agents of the people,” not of legislatures, she argued. They can best carry out this populist role by enforcing statutory words in their “plain,” ordinary meanings, even when such meanings were clearly not intended or desired by the lawmakers, and even when such readings lead to apparent absurdities or gross injustices. (Why such absurdities and injustices are thought to be in the interest of “the people” is unexplained.) The upshot is that courts would see themselves not as partners and honest agents of legislative bodies, but as adversarial watchdogs. This is an activist conception of the judicial role, not a subordinate or passive one.

A second (and related) major point of disagreement between Barrett and Scalia is the importance of respecting prior court decisions that are mistaken according to public meaning originalists. Scalia frankly admitted that much of modern constitutional law cannot be squared with original meaning. He recognized, however, that it would be wholly unrealistic for judges to order a return to bygone days when women had few rights, states were free to ignore the Bill of Rights, the federal government had no obligation to treat all citizens equally, preteen children could be executed, and crimes could be punished by floggings and bodily mutilations. Respect for settled precedent, Scalia wrote in a book co-authored with legal wordsmith Bryan Garner, “has been part of our law since time immemorial, and we must bow to it.” Such respect isn’t part of public meaning originalism, Scalia admitted, but a “pragmatic exception” to it. As Scalia once quipped, “I am a textualist, I am an originalist, I am not a nut.”

Barrett’s attitude toward erroneous constitutional rulings is very different. She criticized Scalia for his “faint-hearted” originalism, and instead argued for a “fearless” originalism that recognizes no legal duty to preserve non-originalist precedent, no matter how entrenched or widely accepted it may be today. In a 2013 Texas Law Review article, she wrote, “I tend to agree with those who say that a justice’s duty is to the Constitution and that it is thus more legitimate for her to enforce her best understanding of the Constitution rather than a precedent she thinks clearly in conflict with it.” Though she conceded that prudent judges have many techniques they can and often should use to avoid head-on clashes between original meaning and deep-rooted precedent, she supports only a “weak” doctrine of adherence to precedent in constitutional cases. As Barrett explains in a 2016 article co-authored with John Copeland Nagle, mistaken constitutional rulings should at best be considered “provisional law” that can be overruled when the time is ripe. Even in cases of so-called erroneous “super precedents” that no sensible judge would now consider overruling, judges have no duty to treat such holdings as legally valid or binding. Their status as “law,” Barrett claims, is wholly derived from the widespread support they currently enjoy. Should that support ever significantly wane, judges should, if squarely confronted with the issue, boldly overrule the mistaken rulings.

In 1987, the Senate overwhelmingly rejected Judge Robert Bork’s nomination to the Supreme Court because, as many senators explained, his views were far outside the legal mainstream. Bork’s opinions were moderate compared to Barrett’s. Bork rejected literal “textualist” readings of broad constitutional language, and recognized that respect for settled precedent is a core judicial value. Not only is Barrett’s judicial philosophy outside the mainstream, it also reflects a fringe view that even Scalia would reject. Whether the Senate should have taken up Barrett’s nomination at all this close to a presidential election can be debated. What is clear is the Senate’s responsibility to reject a nominee whose extreme views may have a powerful influence on the law and the country for decades to come.