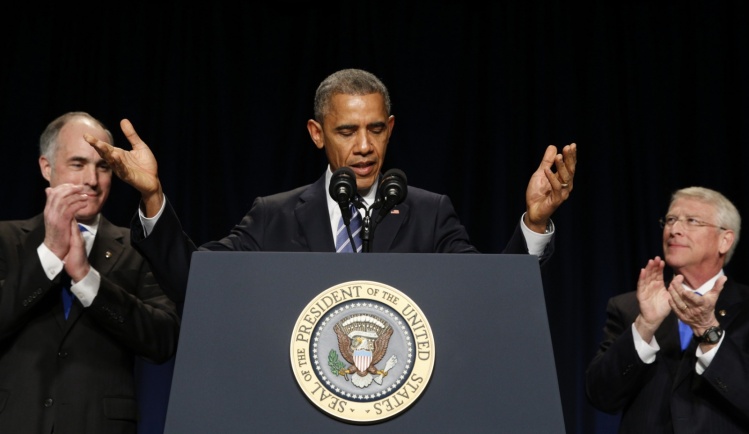 A study that Pew Research released July 10 has some useful numbers on the Democrats’ problem with religion: A lot of them don’t like it, especially among the more liberal members.

The survey’s finding that there is a sharp contrast between Republicans and Democrats is no surprise. Seventy-three percent of the Republicans interviewed said that religion had a positive effect “on the way things are going in the country”; just forteen percent said the effect is negative. Half of Democrats had a positive view, and thirty-six percent, negative.

Beyond that, the study finds a sharp difference among Democrats:

Liberal Democrats are about as likely to say the impact of churches and religious organizations is negative (44%) as they are to say it is positive (40%). By two-to-one (58% to 29%), more conservative and moderate Democrats say churches have a positive [rather] than negative effect on the country.

Instead, the party has pursued a strategy of catering to a more liberal and secular vote in hopes of winning on a heavy turnout. It certainly does not seem to be working.

It’s not easy to bridge the gap: Barack Obama exemplified  that in the 2008 campaign with his remark that people living in small towns in Pennsylvania and the Midwest “get bitter, they cling to guns or religion …”

Here was Obama in community-organizer mode, trying to moderate between the two Democratic constituencies our Pew study finds are divided over religion: He wanted wealthy, well-educated, liberal, secular San Francisco-area audience to appreciate the grievances of blue-collar workers. But the candidate explained himself into a deep hole. His opponent for the Democratic nomination, Hillary Clinton, said his remarks were “elitist.”

As for Clinton, consider that a Pew poll released about six weeks before the 2016 election found that eighty-three percent of church-going Catholics said that having an abortion is “morally wrong,” nearly twice the national rate, forty-four percent. Not all those Catholics who said abortion is immoral would vote based on abortion and a portion of them would favor or tolerate a legal right to abortion.

But more so than other recent Democratic presidential candidates, Clinton tested the conscience of a lot of Catholics who see abortion as immoral. She dropped the pledge that pro-abortion rights Democrats have offered to make abortion rare. Instead, she advocated voiding the Hyde Amendment so that federal funds could be used to pay for abortions. Even Clinton’s running mate, Sen. Tim Kaine, opposed repealing the Hyde Amendment.

The Pew survey released this week did not detect a similarly large divide over religion in the GOP; it found that sixty-eight percent of moderate and liberal Republicans said religion had a positive impact.

The survey of 2,504 adults also looked at attitudes toward other major institutions, including the national news media, financial institutions, labor unions and colleges.

The two wings of the Democratic Party had somewhat similar responses in certain areas, such as colleges, where large majorities saw a positive influence: seventy-two percent favorable, and; nineteen percent, negative. That broke down to seventy-nine percent favorable for liberals and sixty-seven percent for moderates and conservatives.

In contrast, Republicans divided over colleges, with a breakdown of fifty-one percent positive and forty-three percent negative for moderate-liberal Republicans and twenty-nine to sixty-five for conservatives.

Partisan differences over banks and financial institutions have widened, since, according to Pew, it was the first time since 2010 that more Republicans had a positive view of the businesses than negative. In this survey, forty-six percent of Republicans saw the financial institutions in a positive light, and thirty-seven percent viewed them as a negative for the country. Among Democrats, fifty-four percent had a negative view and thirty-three percent, positive. As recently as 2015, Pew found that there were no partisan differences on this issue. Now, there is a thirteen-point gap.

What all this tells us is that attacking colleges and the national news media and defending churches would seem to be effective to attract, or perhaps pander for, conservative Republican votes. For Democrats, the same can be said of attacking banks and financial institutions. The survey shows that if anything, the ideological gap between the parties is widening. Catholics are known to serve as a moderating influence on both parties, but the country’s drift is toward deeper partisan division.