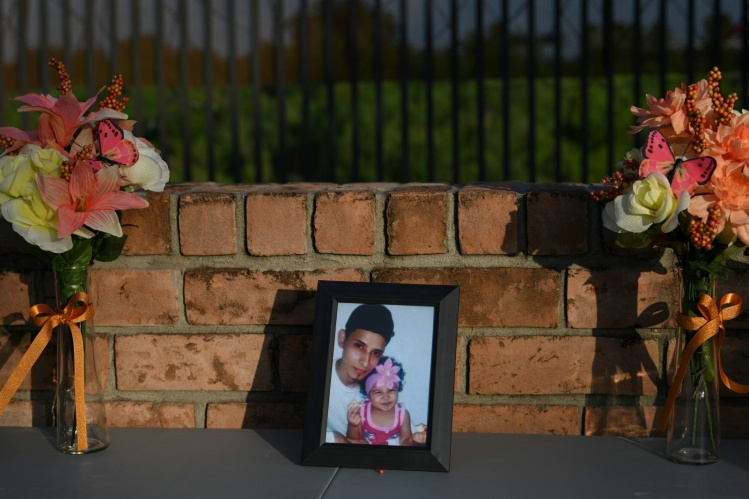 A photo of Salvadoran migrant Óscar Ramírez and his daughter Valeria is seen at a vigil for them in Brownsville, Texas, June 30, 2019. (CNS photo/Loren Elliott, Reuters)

It has been three weeks since Óscar Ramírez and his daughter Valeria drowned while crossing the Rio Grande, a tragedy indelibly documented in a photograph of their bodies floating in shallow water along the river bank, the child’s arm draped almost casually over her father’s shoulder. The image immediately drew comparisons to the photo of Alan Kurdi, the three-year-old Syrian refugee who drowned in 2015, which is said to have heightened global awareness of the migration crisis in the Mediterranean, a catastrophe already underway by the time Pope Francis visited the island of Lampedusa in 2013 to pray for migrants who’d died while crossing from northern Africa. It was assumed that the photo of Óscar and Valeria would have a similarly galvanizing effect in regard to the ongoing humanitarian crisis at the southern border of the United States. “That these photos have such staying power in people’s memories proves a bleak rule,” Ashley Fetters wrote in the Atlantic on June 27. “When the public knows about an atrocity but doesn’t see it, it can feel vague or far away.”

Óscar and Valeria, who’d traveled 1,400 miles from their home in El Salvador, died on June 24. The photograph was disseminated widely on social media the next day and was mentioned a number of times during the first Democratic presidential debate that night; some of the candidates even spoke the names of the young father and his twenty-three-month old daughter. The night after that, at the second debate, the incident was not acknowledged at all, and since then, the specific tragedy of Óscar and Valeria’s deaths and the burst of attention and grief it generated have come to feel vague and far away, supplanted by the fresh offenses rolling daily off the administration’s unceasing assembly line of calculated malice.

Even if it might seem that nothing measurable is accomplished in the moment, it’s the moment itself that matters—the solidarity, the common cause, the invocation of the names of human beings.
sharetweet

The frustration of being unable to keep up was in the air at the Lights for Liberty “Close the Camps” vigil in New York on July 12, one of several hundred such events held around the world that evening to protest the Trump administration’s border policies. Óscar and Valeria’s names were visible on a handful of homemade signs. They were mentioned by several of the speakers, remembered as two more among an ever-growing list of victims. Perhaps this was the only way it could be. The thousands who gathered had no shortage of urgent concerns to process and articulate. In just the twenty-four hours before the vigil, Trump had announced the commencement of deportation raids in major cities nationwide; a House committee report revealed that at least eighteen children under the age of two had been separated from their parents for more than twenty days, and some up to six months, because of Trump’s zero-tolerance policy; and news footage showed nearly four hundred men being held in cages with no cots at a Texas border station, where some had been detained for more than forty days. Under so relentless a tide of outrages, it’s not surprising that a certain inchoateness prevailed. The loosely structured program included prayer and music, testimonials and remembrances, calls to abolish ICE and reminders of the rights people can exercise when ICE agents come to the door. The lineup of speakers featured actress and former host of The View Rosie O’Donnell, activist Linda Sarsour, and New York Congressman Jerry Nadler. Looming over everything, of course, was the pressing matter of removing the president from office, or at least preventing him from regaining it. Chants of “Impeach Trump” alternated with appeals from the stage to support whoever the Democratic candidate might be in 2020, though there were also calls not to settle for “another cis-gendered white male.”

Still, one powerful message did manage to cut through. It was one that was expressed simply, in bold white lettering on black background, on signs spotted here and there among the crowd reading: “Dehumanization Is a Deadly Force.” It was an idea taken up by almost all of the speakers, even if not stated as concisely and directly, and it seemed to animate—and unite—the crowd. Four years ago this June, Donald Trump kicked off his presidential bid with the claim that Mexican immigrants are “rapists,” and the deaths at the border demonstrate the lethality lurking in such language—language the president continuously employs. (And not just the president: earlier this month, ProPublica broke the news of a secret Facebook group in which some 9,500 former and current Border Patrol officers regularly share racist, sexist, and xenophobic memes and jokes about migrants and Latinx lawmakers—including ones making light of the deaths of Óscar and Valeria.) Dehumanization is a necessary first step in the legitimization and eventual routinization of violence and abuse; it’s a policy this administration has committed itself to. But public protest is a visible counter to it, and so now seems more necessary than ever. Even if it might seem that nothing measurable is accomplished in the moment, it’s the moment itself that matters—the solidarity, the common cause, the invocation of the names of human beings, like Óscar and Valeria, and the many-voiced insistence that what is happening is wrong.