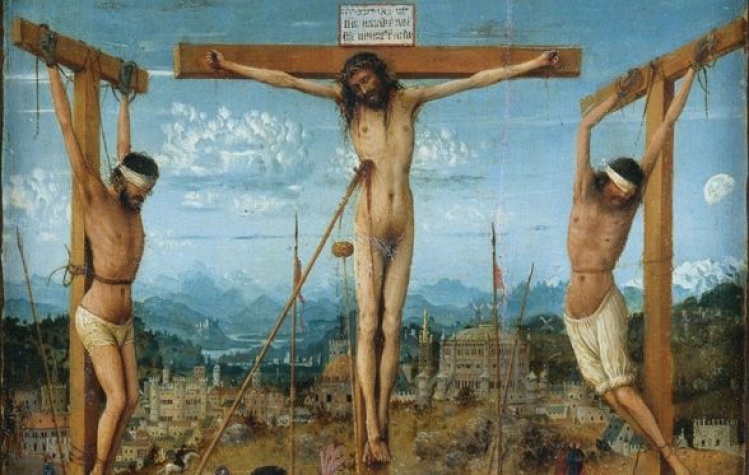 Sixteen years ago I reviewed appreciatively for Commonweal a book of sermons titled The Bible and the New York Times. The title clearly played upon Karl Barth’s noted dictum that the preacher “should preach with the Bible in one hand and the daily newspaper in the other.” The incisive sermons revealed the preacher, Fleming Rutledge, an Episcopal priest, to be a deeply informed student of the Bible and a sensitive exegete of contemporary culture and society.

In her remarkable (indeed, monumental) new work, Rutledge further probes “the strange new world of the Bible” to its mysterious and scandalous depth in the crucifixion of the Son of God. And she diagnoses the deepest need of the world (manifest not only in the daily newspapers but also in the works of novelists and poets through the ages) as its often inchoate longing for redemption.

Though the book bears ample testament to the author’s intimate familiarity with works of biblical and theological scholarship, her abiding concern remains pastoral. Not only the text, but the footnotes as well, bear generous witness to the author’s own pastoral experience and discernment. Her pervasive concern is to support “a deepened commitment to preaching, teaching, praying.” Thus the book is best approached through lectio: the slow meditative savoring of its theological and spiritual richness.

The heart of the matter for the book (as for the New Testament itself) is the scandalous confession of a crucified Savior. Rutledge writes: “The cross, incomparably vindicated by the Resurrection, is the novum, the new factor in human experience, the definitive and world-changing act of God, that makes the New Testament proclamation unique in all the world.” One might suppose this assertion to be self-evident, were it not for the troubling marginalization of the cross in a good deal of contemporary theology, preaching, and pastoral practice.

Rutledge attributes some of this unholy neglect of Christianity’s essence to the sensibilities of a therapeutic and consumerist culture that reacts warily to talk of “sacrifice” and associates the cross with an unhealthy passivity in the face of evil. By evading the salvific scandal of the cross, these attitudes conspire to reduce the Gospel to a one-dimensional moralism. Rutledge’s urgent counterclaim argues that “the crucifixion is the touchstone of Christian authenticity, the unique feature by which everything else, including the Resurrection, is given its true significance.”

Note that Rutledge accents not merely the “cross,” but the “crucifixion:” not merely the death, but the horrendous manner of the death. The prolonged public choreography of crucifixion effects the utter dehumanization of the victim. Often enough theologians will invoke the notion of kenosis: the self-emptying of God’s Son. But, paradoxically, the technical term can serve as a barrier to a true appreciation of the depths of degradation to which God has sunk to accomplish human salvation. Indeed, “it is in the crucifixion that the nature of God is truly revealed.”

Crucifixion unveils not only the abyss of God’s love, but also the depth of the alienation that must be addressed. “The crucifixion of Jesus is of such magnitude that it must call forth a concept of sin that is large enough to match it.” Rutledge appeals to Paul to evoke the depths of the mystery revealed. “For our sake God made Christ, who knew no sin, to be sin, so that in him we might become the righteousness of God” (2 Corinthians 5:21). And (not least of the book’s achievements) an entire chapter offers a spirited defense of St. Anselm against the gross misinterpretations that have slandered this great theologian. Anselm’s surpassing merit was to fathom the pondus peccati, the terrible weight of sin, that afflicts humankind and the necessarily radical remedy that can set it right.

Thus the book is fundamentally an exploration of “soteriology,” the Christian understanding of salvation, the salvation realized by Jesus Christ in his Incarnation and, supremely, in his crucifixion and Resurrection. Rutledge structures the second part of her work in terms of the key “motifs” or themes through which the New Testament sounds the inexhaustible significance of God’s salvific action in Jesus Christ. She expounds the motifs of Passover and sacrifice, ransom and redemption, Christus Victor and descent into hell, substitution and recapitulation.

She reproduces on a vast canvass the pattern that characterizes her sermons. The biblical theme is carefully set forth and examined and continually placed in relation to insights culled from classical works of literature and from historical events. Rutledge draws illuminating correlations with the quest for justice exemplified in the South African “Truth and Reconciliation” Commission and in the vision and practice of the civil-rights movement in the United States. Both movements caution against “premature reconciliation,” which fails to acknowledge evil adequately.

Throughout she inveighs against the sentimentality that reduces divine love to an attitude of “forgive and forget” or “God accepts us just as we are”—in effect sundering God’s grace and God’s judgment. She stresses that working out the relation between God’s justice and God’s mercy is “an essential task of Christian theology, preaching, and pastoral care” today. Unless we do so, either merciless judgment or cheap grace will ensue.

Moreover, as she often cautions, the dividing line between the godly and ungodly cannot be facilely drawn. It does not pass only between “us” and “them”—for far too easily victims have turned into victimizers. “All have sinned and fall short of the glory of God” (Romans 3:23). Each person, then, must take account of the power of sin to infiltrate and corrupt. Unsurprisingly, Flannery O’Connor figures among the novelists most cited in the book.

God’s grace, therefore, does not exclude, but enfolds judgment. God’s love does not cancel condemnation of sin. But the Christian scandal is that God takes judgment and condemnation upon himself: “wounded for our transgressions, crushed for our sins; upon him was the chastisement that made us whole—by his stripes we are healed” (Isaiah 53:5). This is not the pound-of-flesh punishment inflicted by an angry Father upon a hapless Son. Redemption is the integral and integrating act of the Triune God whose love is compassion—suffering with. Redemption is ultimate at-onement, beyond all division and estrangement.

Although Rutledge does not allow the motif of “substitution” to harden into an “explanatory theory,” she does consider it the cantus firmus undergirding the other motifs. It discloses how far God’s grace truly extends—and its terrible cost. It proclaims a Savior who does not only act on our behalf, but in our place: “even unto death on a cross” (as the hymn in Philippians marvels). To take away the sin of the world, the Lamb of God who knew no sin, takes sin upon himself, becoming sin for our sake and in our place. He thereby justifies the unjust, rectifying sin’s disorder at its root, transforming the world’s pent-up hatred and murderous wrath into the new life of communion. For, ultimately, human hatred and wrath are an assault upon the Triune God who alone can propitiate and bring peace.

All this is God’s doing in Christ, reconciling the world to himself. Yet we are not consigned to be inert bystanders, merely passive beneficiaries. We are called to grace-inspired participation in Christ. We are summoned to become members of Christ’s body, entering by baptism into the new covenant in his blood. But this participation entails a “radical overhaul,” for it is ever a baptism “into his death” so that through his resurrection we too might walk in “newness of life” (Romans 6:4). As preacher and teacher in the church, Rutledge vehemently counters the glib gospel that we are acceptable “just the way we are.” Rather the Gospel of the Crucified compels her to assert: “something has to transpire before we are counted as acceptable.” We must be crucified with Christ, so that we may be raised in him, by being incorporated into his body.

It may be thought slightly perverse to wish that a rich volume of over six hundred fifty pages might be longer still. Yet I need to note what I take to be a salient omission from this splendid study. Having raised the crucial reality of “participation” and “incorporation” in Christ, it seems discordant that Rutledge makes no reference to the Eucharist. Her hesitancy in this regard may stem from a Barthian wariness with regard to “religion” as an idolatrous construct and with her reservations concerning the Eastern Orthodox focus on theosis or deification which, she fears, risks blurring the distinction between Creator and creature.

Whatever the background reasons, the absence of attention to the corpus mysticum that is the Eucharist raises the question of the actuality of our humanity’s incorporation into Christ. However transformed, is our God-given nature redeemed and saved; or is nature supplanted rather than perfected by grace? Are we, with our concrete histories and gifts, enabled by Christ’s grace to act as real, if always dependent, collaborators? For it is, after all, by the Eucharist that our new identity in Christ is nourished and extended. It may be telling, in this regard, that the word “sanctification” does not appear in the very complete index of the book, nor is there any listing for “saints.” Is our participation in Christ truly a present reality or only a future hope? Rutledge convincingly underscores the New Testament’s “apocalyptic” horizon: God’s redemptive intervention to rectify human and cosmic disorder. But does she do full justice to the eschatological “already,” accomplished in the paschal mystery and made present in the Eucharist that believers share?

I trust the questions posed bear tribute to the challenging gift that Rutledge has provided. I can only echo the chant Augustine heard in the Garden: tolle, lege: take up and read! Rutledge’s volume wonderfully celebrates the triumph of redeeming grace: the crucified Messiah, Jesus who is the wisdom and power of God.

Rev. Robert P. Imbelli, a priest of the Archdiocese of New York, is an associate professor of theology at Boston College.