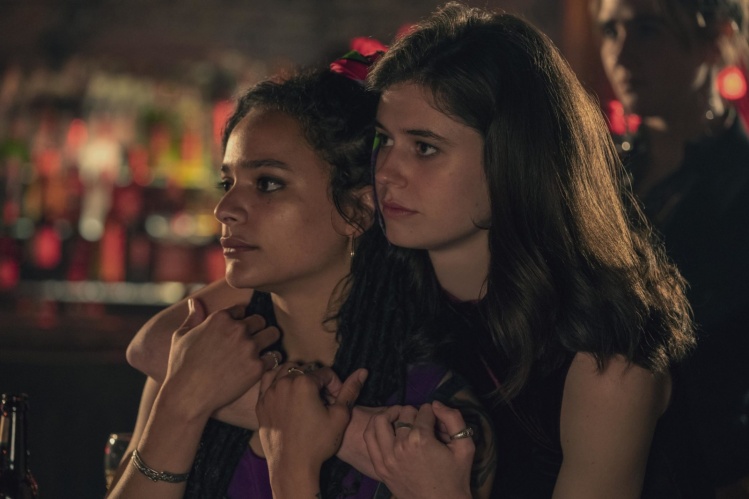 I bought the novel Conversations with Friends when it came out in 2017, along with lots of other women my age. At that time, we were about as old as Bobbi and Frances, the eponymous friends. The book was almost required reading; Sally Rooney was widely hailed as the millennial novelist. The insights she provided on our age group, though bleak, weren’t wrong. Lots of us, like her protagonists, had trouble negotiating relationships. Lots of us didn’t like ourselves. Lots of us read the book in the white lights of the subway with headphones on, isolated even with our bodies pressed against strangers.

Reviewers of Hulu’s 2022 streaming adaptation often complain that Rooney’s incisive generational commentary doesn’t come through on screen. The book is in large part about the problems facing young people who grew up with digital devices. It’s full of emails and DMs—but also agonizing over those emails and DMs, the mental processes of composition and interpretation. Without this interiority, the show doesn’t quite make sense. Perhaps television was the wrong medium for a story that takes consciousness as its texture. Without any thoughts, on-screen conversations between characters feel stilted and empty. The show drags. It’s slow, and often boring.

But what bothered me most about Conversations wasn’t just that it didn’t make enough sense of its character’s communicative deficiencies. It’s that those failings (and they’re obvious) don’t come with any real consequences. By the end, it’s as if they aren’t failings at all.

Frances and Bobbi talk all the time: in apartments and in emails and texts. They perform slam poetry, their dialogue so polished it constitutes a literal performance. But quantity doesn’t mean quality. Frances bites her lip and casts her eyes around and wrings her hands. Often, she says too little. Bobbi is vibrant and cunning, often saying too much. She accuses Frances of withholding: “You’re thinking things without saying them. It’s suspicious.” She cuts to the core of Frances’s quiet: “Your self-obsession is exhausting, and fucking boring.” She’s not wrong; Frances can be exasperating, “pathologically passive.” But Bobbi’s blunt honesty isn’t constructive—it’s mean. She says the right things in the wrong way.

Even so, the girls’ relationship constitutes the show’s central romance, and we’re meant to want it to work. In the novel, that support isn’t mandated. The girls are self-centered, even if that self-centeredness isn’t all their fault. The fact that they end up together is neutral at best. But the show casts them as partners in a good, if tortured, love story, dancing in clubs and having sex in a sunlit apartment. Shy and loud, introspective and bold: these two are different enough to be good for each other.

Perhaps television was the wrong medium for a story that takes consciousness as its texture. Without any thoughts, on-screen conversations between characters feel stilted and empty.
sharetweet

But in fact, they’re all too similar: painfully naive, intellectually snobbish, often bratty. If their conversations with each other are often imperfect, their conversations with others are worse. Frances is standoffish with her mother, meeting concerned questions with blank stares. She’s petulant with a boy she meets on a dating app, disdaining his attempts at earnest discussion. When Bobbi belittles their classmates at a bar, Frances tells her to stop “punching down”—but there’s love in her eyes. It’s clear she adores Bobbi’s ability to “tell it like it is,” even at the expense of others’ comfort.

There are extenuating circumstances, of course, even aside from the millennial malaise. The girls don’t simply behave this way for no reason. They are often in pain, emotional and physical. “I feel like shit,” Bobbi says. Things are hard at home; her parents are in the midst of a divorce. Frances’s father is an alcoholic; she suffers from terrible period pain.

Perhaps this isn’t entirely the two friends’ fault. Scenes are literally lighter and brighter when Melissa and Nick are around. Color supplants the silvers and grays of university life in Dublin. Swimming and feasting take the place of ruminating. For a moment, action supplants speech. Melissa and Nick are older, attractive. And they’re also—in spite of Melissa’s passive aggression and Nick’s reticence—kind of nice. Maybe the four of them can work things out, come to a modern arrangement. They can banter over nice wine and have sex in clean sheets. If this doesn’t exactly constitute happiness, at least it’s enlightened.

That’s the supposedly positive vision the show hints at in a closing sequence of upbeat music and sexual ecstasy. Bobbi and Frances will be together. Frances and Nick will be together. Never mind that the power dynamics of this four-way relationship aren’t entirely equal, and the participants are often miserable. “I just can’t be with these people anymore,” Frances sobs. “Please, please, leave us alone,” Melissa begs.

But the show’s moral emptiness isn’t strictly limited to the way it treats infidelity. It’s those two friends, having conversations, who are going to move forward “committed to each other in our own way.” How, and on what grounds? The show never says. Bobbi and Frances spend the bulk of their time on screen keeping secrets, sniping, and making each other jealous. When one of them is miserable, entangled in the older couple’s affairs, they too rarely offer advice or comfort. They either stop talking or converse in endless paragraphs, sending a few long emails to clear things up. But grand gestures don’t make up for daily insults and obfuscation. I left the show wondering what kinds of conversations these friends should be having. Not just deep ones. Frances and Bobbi share no pleasantries, no jokes. They don’t practice the little conversational sacrifices—kindly questions, loving corrections, patient listening, white lies—that we often make for the sake of someone we care about.

It’s common to accuse millennials of bad communication. But the trouble isn’t just our medium, it’s our messages, the ones we give and the ones we believe. We desperately want to be loved, but we’re often unwilling to make the sacrifices or concessions that love demands. We cling to our freedom—a commitment without cost, which isn’t commitment at all. But at the same time we believe that love has to be earned by a kind of absolute fidelity: instant responses, carefully crafted messages, constant attention to another’s callouts.

The show offers glimmers of another way, one that isn’t so tortured and laden with semantic complications. Frances cleans her father’s apartment when he’s in a slump. Bobbi makes tea when Frances is sick. No ulterior motives here, no verbal games or strategic silence. Just action, just a good turn done, a moment of genuine love that supersedes language.