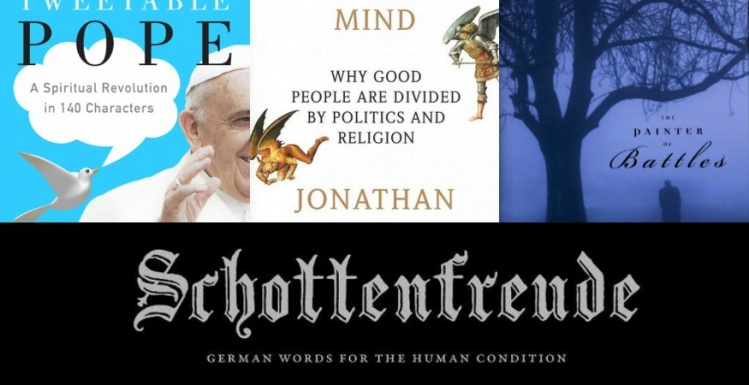 At this most wonderful time of the year, when you gather around the family table, are you looking forward to talking about politics? As kids eagerly await the surprises of Christmas morning, do you wait in joyful hope for Uncle Frank’s holiday gift—his multi-point anti-immigration plan, cribbed entirely from anonymous email forwards? Or perhaps this year it’s an argument about sexuality, vegetarians, or Russia. (If the wine is flowing freely, Frank can easily combine all those into one rant.)

[Read all of our 2015 Christimas Critics here.]

In past years, you tried to reason with your uncle. In your youthful optimism, you labored to offer pragmatic win-win solutions—compromises, to be sure, but ones worth making for the sake of pluralism, fairness, and peace. Alas, Frank’s armor has proved as impenetrable as the sale-rack fruitcake he brought. Now here you are again, backed into the dining-room corner, your only escape blocked by that one relative who miraculously never needs to get up from the table. Pass the Merlot, you say.

Or better yet, before the holidays, read Jonathan Haidt’s masterwork of descriptive moral psychology, The Righteous Mind: Why Good People Are Divided by Politics and Religion (Vintage, $16.96, 528 pp.). Haidt narrates, in part, his own journey of coming to understand people whose moral reasoning differs profoundly from his: social conservatives. That individual story drives the book forward, but its aim is much broader. What he and his colleagues have discovered, through decades of research on humanity’s evolutionarily adapted “moral foundations,” is that “Western, educated, industrialized, rich, and democratic” people (an acronym for WEIRD cultures) have very limited modes of moral reasoning. A contemporary liberal in Europe or North America asks two basic moral questions: Is anyone harmed? and Is the process fair?

However, the vast majority of people around the world—including many in our own country—have a more complex moral calculus that emphasizes loyalty, authority, or sanctity. Haidt proposes how and why each of these moral foundations evolved and what good each still does for human flourishing. Social conservatives usually try to keep all these moral foundations in balance. For Frank, an immigration debate necessarily includes loyalty to one’s nation and deference to borders as markers of sovereign authority. The explanatory power of the book is enormous, ranging from national political issues (“Why do rural, working-class Americans vote against their economic interest?”) to dinner-table conversations (“Why do Frank and I dig in our heels, instead of seeing the other’s side?”).

The book is much richer than the appetizer offered here. And this small taste runs the risk of over-psychologizing or even pathologizing a conservative worldview. But the overall argument psychologizes everyone, and it is liberals who come out looking simple-minded and rather adolescent. Haidt offers a comprehensive proposal for why good, reasonable people become polarized on moral and political matters. And for attentive readers, he suggests ways that one can spur even entrenched thinkers to change their minds. Hint: successful methods don’t usually involve argumentation. But until you read the book, you’ll need to just sit back and let Uncle Frank describe how to Make America Great Again™.

After dessert, liberated from the table, what a relief to see your youngest cousin, Sandra, by the fireplace. She just returned from a Fulbright in Jordan, documenting life in the Syrian refugee camps for her MFA in photojournalism. You’ve been dying to hear her stories, and also to ask her opinion about The Painter of Battles by Arturo Pérez-Reverte (Random House, $16, 224 pp.), which you gave her before the trip. In this spare, introspective tale with only a few characters, a former war correspondent—like Pérez-Reverte himself—becomes a reclusive painter, using the brush as a medium for processing the trauma he witnessed through the camera.

When he is visited by an apparent stranger, whose life was tragically altered by being featured in one of the journalist’s photographs, the book’s philosophical theme comes into focus. Concerning the morality of war, we typically consider soldiers, guerillas, bystanders, aid workers, children, and more. But what is the moral role of the photographer? Ostensibly there to document events, does he or she stand always one click away from affecting the unfolding events? Is there an objective reality in the fog of battle, independent of the camera’s eye? Or, as in Heisenberg’s uncertainty principle, does the act of observation at close range necessarily alter the event observed, thus rendering pure observation impossible?

In the digital era, we too are one click away from the events. What then is the moral status of the distant observer, filled with compassion or guilt or both, yet paralyzed by the enormity and individuality of the events beyond the pixels? When does the raising of awareness become the satiation of a voyeur’s desire? In the end, Pérez-Reverte’s protagonist answers none of these questions, but his encounter with a would-be assassin prompts a philosophical dialogue whose result is as deep as those from ancient philosophy.

After hearing how this story helped to form Sandra’s conscience on her trip, a glance above the mantel—and an alarmed look at your watch—reminds you that you haven’t yet bought the stocking stuffers for this year! Quick, find a bookstore! (If one still exists in your town.) For an up-to-date analysis of the most popular person on the planet, consider Michael O’Loughlin’s The Tweetable Pope (HarperOne, $19.95, 256 pp.), which tracks the noteworthy trends of Pope Francis’s short messages to the world. With chapters on ecology, gossip, and the devil, you’ll be ready for any conversation about the pope’s favorite topics.

As Christmas Eve winds to a close, and you gaze out the window at the moonlit snow, you might feel overcome with Wintersturmwonnemondwende—that delight at the changing of the seasons captured by an invented German word (composed of “Winter-Storm-Bliss-Moon-Turning”). Find this and many more in Ben Schott’s Schottenfreude: German Words for the Human Condition (Blue Rider, $16, 96 pp.), a humorous must-have for every logophile. It too fits in a stocking, but only one long enough for German words.