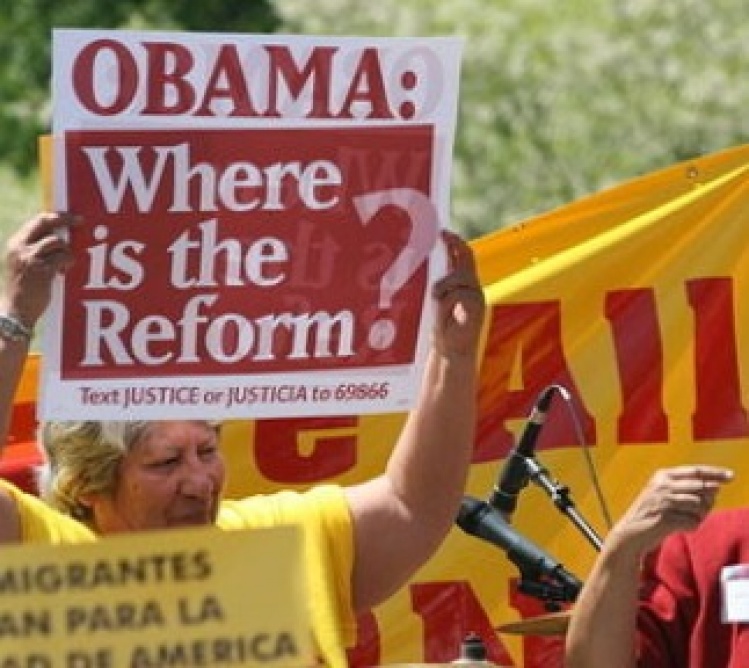 It was unthinkable, only three short months ago, that Washington’s long-estranged lawmakers would suddenly find themselves entranced by feel-good bipartisanship, especially on an issue as divisive as immigration. And yet here we are: A bipartisan reform proposal has emerged from the Senate’s “Gang of Eight,” followed by a receptive speech in Nevada by the president, followed by qualified praise—from no less a right-wing enforcer than Rush Limbaugh—for the reformist overtures of Florida’s Republican Sen. Marco Rubio. The unthinkable now seems possible.

It’s important not to overstate that judgment; reformers still have a minefield to navigate. But their effort has come surprisingly far, surprisingly fast, and we should hope the progress continues. The United States’ current immigration regime is a dysfunctional and often cruel system that imposes huge economic and humanitarian costs on citizens and noncitizens alike, with few justifying policy benefits. In other words: It is entirely possible to overhaul our current system without endangering its legitimate goals. So why hasn’t anything been done to fix it?

Much of the answer lies in a common misreading of lessons from the Immigration Reform and Control Act of 1986. That law granted amnesty to nearly three million undocumented immigrants, in exchange for beefed-up border security and penalties on businesses that hired undocumented workers. The approach mirrored the logic of today’s reform push: Normalize the status of immigrants already here, and staunch the flow of illegal entries through economic and security measures. But while the amnesty was carried out, lawmakers mostly gutted the employer penalties in order to secure the support of big business—and, to compound matters, spending on border security remained measly for years. With weak penalties and insufficient funding, the number of illegal entries simply kept rising. Conservatives felt burned: Having agreed to swap amnesty in exchange for a real halt in illegal crossings, they ended up with amnesty and more illegal crossings. They vowed never to repeat their mistake.

The bitter memories of 1986 were evident in Rush Limbaugh’s wary questioning of Rubio after the Senate group released its plan. Arguing that a “reluctant” President Reagan had granted amnesty “because he was promised border security,” Limbaugh complained that “the border security never happened. And the same language is being used today as was used in 1986.” Rubio concurred, assuring Limbaugh that if “this bill does not have real triggers in there, if there is not language in this bill that guarantees that nothing else will happen unless these enforcement mechanisms are in place, I won’t support it.”

This was an important exchange, because it signaled the right’s most likely escape hatch if this recent bipartisan comity turns sour. Solving America’s immigration problem requires a path to citizenship, which is a hard sell to millions of people who feel, with some justification, that rule-breaking ought not to be rewarded. The only way for conservatives to swallow that pill is to insist on tougher border security—and even then, differing views on what constitutes “security” could doom an agreement.

Yes, the southwestern border should be secured, but the truth is that it is better-secured today than ever before—and ignorance of that fact should not be used as an excuse to block reform. In recent years, the government has added thousands of new border agents (nearly doubling the total since 2006), hundreds of miles of border fencing, and hundreds of camera towers. It has expanded its fleet of high-tech vehicles, including trucks fitted with infrared cameras and radar systems; planes; helicopters; and even unmanned surveillance drones. Meanwhile, as living standards rise and birth rates fall in Mexico, steadily fewer people are attempting entry into the United States. Combined with a massive increase in deportations under President Obama, the result has been, incredibly, a halt—and possibly a reversal—of net migration from Mexico. That’s right: More people are leaving for Mexico than are coming from it.

The push for reform, then, should focus on the undocumented population now living in the United States. We lack the knowledge, the resources, and—thankfully—the stomach to identify, round up, and deport 11 million people, many of whom have lived here for decades and have built families that include U.S. citizens. Nearly 17 million people now live in families of “mixed” status—some members here legally, others not.

To ignore these deep roots is to skirt the real humanitarian issue at stake. Yes, there must be penalties for illegal entry, and major reform proposals include fines, payment of back taxes, mandatory civics classes, and waiting periods for legalization so that law-abiding immigrants are not cut in line. But the path to legalization must not be derailed by cries of amnesty and Pharisaic theorizing about moral hazard. President Obama’s remarks in Nevada captured the tension well: “Yes,” he acknowledged, “they broke the rules … But these 11 million men and women are now here. … They’re woven into the fabric of our lives.”

Still, there is a bitter irony in the president’s words. Obama’s first-term handling of immigration policy was marred not only by political miscalculations, but also by a discouraging moral cowardice. In his quest to appear tough before immigration hawks, he often ignored the ways in which the undocumented are, as he put it, “woven into the fabric of our lives.” His administration deported undocumented immigrants in record-breaking numbers—a costly way to convince his opponents that he wasn’t soft on lawbreakers. This toughness utterly failed to win him any political goodwill. The current push for reform is taking place because of Republicans’ disastrous performance among Latinos last November, not because Obama’s opponents only recently became aware of what he’s been up to for the last four years. If the president’s electoral performance among Latinos hadn’t been so dominant, there would be no push for reform today.

Worse, the deportations undermined an important policy to which the administration demonstrated only sporadic commitment: Prioritizing enforcement to focus on criminals, not elderly grandparents, young students, or parents and spouses of U.S. citizens. That policy of “prosecutorial discretion” was regularly ignored. Authorities pursued the deportation of a man who had been targeted by a murderous gang in his home country and was caring for his dying mother, a U.S. citizen’s mother who was a refugee from Guatemala’s civil war, and a community of Indonesian Christians who settled in New Jersey after fleeing religious violence. Officials in these cases were unafraid to ignore the guidelines; usually, they proved more receptive to the threat of bad publicity than professional sanction. A path to citizenship would do much to repair this badly broken system.

If that change happens, it will be a gift to a president whose performance on immigration, with a few welcome exceptions, has been ineffectual. To be fair, Obama made one critically important, and long-overdue, policy change during the campaign, providing temporary administrative relief for undocumented immigrants brought here as children. The White House’s carefully-timed measure, aided by Mitt Romney’s antagonistic “self-deportation” rhetoric, helped Obama carry more than 70 percent of the Latino vote en route to easy reelection. Again, it is that number, more than anything the president has done, which may convince Republicans to support reform.

So far, though, that recognition of political self-interest has dawned on only one side of the Capitol. This is a reason for concern, since the biggest obstacles to reform were never in the Senate. Deep opposition remains among House Republicans, and if they choose to exploit worries—however overblown—about border security or “amnesty,” their caucus may be able to block reform.

That would be a short-term victory for conservatives, but a long-term failure for the GOP and for President Obama, who may not get another chance to fix an area of policy he has mostly botched. A rare window of opportunity has opened. If it closes without any progress, American politics will quickly move on to the next big thing. But it will leave behind, and possibly for quite a long time, those millions who have been waiting years for relief.