The Common Good or Capitalism? 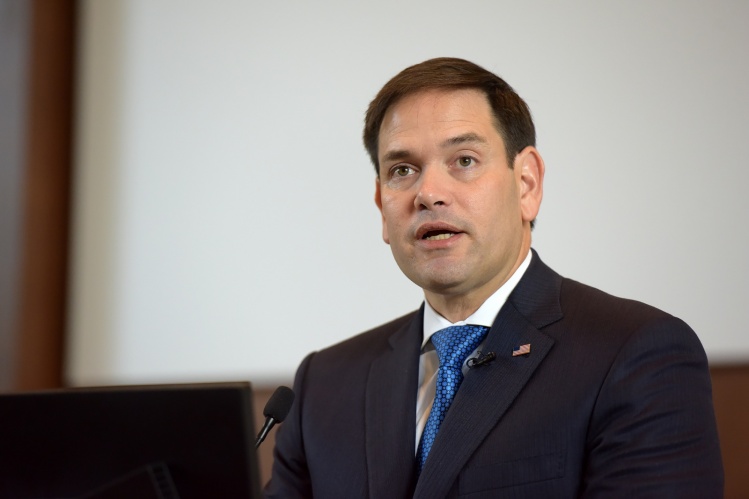 The Republican Party has, for the most part, worshipped contentedly in the church of free-market fundamentalism for the last four decades. Guided by its pro-business, anti-government doctrines, they have crippled unions, undercut workers’ rights, and pushed tax cuts that benefit the wealthiest Americans. But every few years an enterprising conservative politician recognizes that extreme inequality and stagnant wages might be testing voters’ faith in such policies—and proposes a supposedly more creative and compassionate economic alternative. During his last term in office, for example, former House speaker Paul Ryan drew on his Catholic faith to launch a campaign touted by the Atlantic as a “much-ballyhooed push to get his party talking about poverty.” Now another Republican, Senator Marco Rubio of Florida, is appealing to Catholic teaching to advocate for what he calls “common-good capitalism.” As with Ryan before him, Rubio’s effort has some laudable goals, but he delivered slogans more than a substantive break with GOP orthodoxy.

Rubio put forward his new economic vision in a speech last week at The Catholic University of America’s business school in Washington, D.C., titled “Catholic Social Doctrine and the Dignity of Work.” He began by citing Pope Leo XIII’s 1891 social encyclical, Rerum novarum, written to address the intense debates over workers’ rights and the responsibilities of businesses that followed the industrial revolution. “I wanted to revisit what he wrote because we are once again in the midst of transformative and disruptive economic change, and we once again face rising calls for socialism,” he said.

Throughout his speech, Rubio especially went out of his way to emphasize that he understands the anger and fear of struggling Americans. During his campaign for the Republican nomination in 2016, Rubio said he “learned the hard way” why so many people didn’t share the optimism he had as an “unabashed believer in American exceptionalism.” He sometimes used language that would draw cheers at a Bernie Sanders rally, talking about “a system that has been rigged” against young people burdened by student debt and railing against “the people who brazenly adopted the motto ‘greed is good’ in the 1980s, but then caused a catastrophic financial crisis.” Rubio noted that while corporate profits have soared over the past forty years, “investment of those profits back into the companies’ workers” has dramatically declined. “This is what it looks like when, as Pope Francis warned, ‘finance overwhelms the real economy,’” he said.

Rubio deserves some credit for criticizing a profit-only corporate mentality and acknowledging that markets alone are not enough to serve the common good. But he neglected to mention unions or a living wage even once—scandalous omissions for a speech taking a Catholic approach to the dignity of work. This was, however, consistent with Rubio’s legislative record of opposing increases to the minimum wage, supporting so-called “right-to-work” laws, and working to pass tax cuts that benefit corporations and the rich—all priorities more in line with the U.S. Chamber of Commerce than Catholic social teaching. Even as he quoted liberally from papal documents, Rubio conveniently refused to confront his own legislative complicity in some of the same trends he denounced. It’s no surprise that Rubio ignored St. John Paul II’s admonition that labor unions are “an indispensable element” in “the struggle for social justice.”

The setting for Rubio’s speech was also telling. The business school at Catholic University has received nearly $13 million from the Charles Koch Foundation in recent years, drawing challenges from some Catholic activists and scholars who argue that the Koch brothers’ deep pockets have been used to advance libertarian policies that clash with Catholic social teaching on economic and environmental justice. And of course the business school is named for Timothy Busch, a Catholic CEO and attorney who specializes in estate planning for wealthy clients. Rubio surely felt comfortable sidestepping the possibility of raising the minimum wage in a building named for someone who once called any floor for what workers are paid “an anti-market regulation that leads to unemployment” and does “great harm” to workers.

Rubio’s arguments, which were long on moral exhortation but short on concrete measures to help workers, drew praise from some quarters of the right. At First Things, Emile Doak gushed that Rubio’s framework was “a more authentically Christian approach to political economy than anything either major party has put forth in recent memory.” He also firmly put Rubio’s intervention in the context of debates occasioned by the rise of Donald Trump: “Conservatives are turning against outsourcing—both of American jobs to China and of economic thought to libertarians.” He went on to suggest that by “looking to Rome rather than Vienna” for inspiration, “Rubio seeks to reclaim a holistic disposition that recognizes the members of the U.S. economy as human persons, not simply scientific datum.” The article was promoted by Rubio’s Twitter account.

But if the speech was emblematic of the ways conservatives are trying to respond to populist discontent, it was also shot through with bizarre claims and predictable right-wing bogeymen. A “government that guarantees you a basic income is also one that controls where you work and how much you make,” Rubio declared without any evidence or explanation. Similarly, he darkly warned that a “government that promises free college is also one that controls what school you must go to and what you are taught.” As if taking a cue from Fox News, Rubio raised the specter of socialism destroying America, a tired trope on the right for nearly half a century, and a clear reference to the Democratic presidential primary. This throwaway line was intellectually lazy, and didn’t distinguish between authoritarian versions of socialism and democratic socialism, which Pope Emeritus Benedict XVI once lauded—surely someone Rubio wouldn’t dismiss as a left-wing radical. “In many respects, democratic socialism was and is close to Catholic social doctrine and has in any case made a remarkable contribution to the formation of a social consciousness,” then-Cardinal Joseph Ratzinger said in a 2004 speech that was later published in First Things.

At a time of ideological ferment on both the right and the left, we need more sober-minded Republicans who offer substantive proposals that don’t simply repackage their party’s tired economic agenda. Rubio’s speech ultimately failed to do that. Like Paul Ryan before him, he should be commended for making an effort, at least rhetorically, to challenge the dogmas of his party and open up space for debate. But good intentions are not enough. Rubio’s actual policy record and highly selective reading of Catholic social teaching betray him.

A Wake-Up Call for the Catholic Church