The Comedy in Ash & Roses

By B. D. McClay
Liturgy
Spirituality 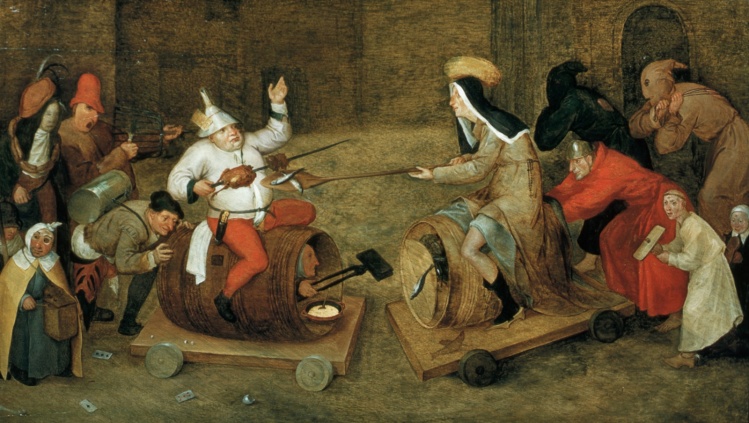 The battle between Carnival and Lent, Painting by the workshop of Pieter Bruegel the Elder.

That Valentine’s Day and Ash Wednesday coincide this year sounds almost like a bad joke. It will no doubt inspire more than a few. “I guess the love drive and the death drive really are the same,” the ghost of Sigmund Freud proclaims, smoking a cigar and driving a red convertible a little too fast into a dark tunnel.

Nonetheless, it’s happening, and it’s too delightful a convergence just to leave alone. So how to talk about this without being cranky—or, worse, precious.

Valentine’s Day alone already inspires crankiness enough. People who are single view it as an insult from the universe, people who are coupled as an imposition, and like any ritual where you’re supposed to demonstrate love, it presents numerous opportunities for humiliating failure. At this point the Valentine’s ritual I see people observing most often is taking to Facebook to denounce commercialized love, followed by people who want you to know something about the real St. Valentine.

Such proclamations aren’t wrong. Valentine’s Day, as popularly observed, really doesn’t do its saint much honor. On the other hand, though I’ve never celebrated Valentine’s Day with a person I loved, I happen to like it—precisely because it’s a little tacky and embarrassing. What’s more human than having to take one of your deepest feelings and finding nothing at hand but a bunch of flowers, a silly card, and food? It’s not as if we approach funerals with any better tools.

And yes, it’s funny to go into a restaurant to celebrate your own unique and irreplaceable relationship with a fixed-price menu that everyone else in the restaurant is also eating. But maybe that’s the point. The love we feel for each other is intensely private and nigh-inexpressible, but at the same time, by its nature, demands to be publicly expressed. Hence, among other things, marriage itself.

Lo and behold, Ash Wednesday is also an occasion for public expression, and so at first glance, we have found the connection between the two occasions that we were looking for. Doesn’t our remorse cry to be publicly expressed as well? Isn’t our mortality inescapably public? Perhaps the ashes are the roses we bring to God, or something along those lines. Not what we’d like to bring, but what we can.

Perhaps the ashes are the roses we bring to God, or something along those lines. Not what we’d like to bring, but what we can.
sharetweet

This would bring things to a tidy conclusion—isn’t it sad that our noblest instincts can be expressed only through insufficient ritual?—but unfortunately, it doesn’t quite work. Because the moment you settle into this very rosy understanding of your own intentions, and presumably into your pew, the reading from Matthew comes along to hit you upside the head:

Beware of practicing your piety before others in order to be seen by them; for then you have no reward from your Father in heaven.… And whenever you fast, do not look dismal, like the hypocrites, for they disfigure their faces so as to show others that they are fasting. Truly I tell you, they have received their reward. But when you fast, put oil on your head and wash your face, so that your fasting may be seen not by others but by your Father who is in secret; and your Father who sees in secret will reward you.

Suddenly, it seems we’re being scolded for showing up at all; we’re admonished to do our fasting and praying secretly, so that we can know our motivations are pure, but in point of fact everybody is about to leave the church with a very prominent declaration of their piety. While you’re sitting there and somberly contemplating Death, the gospel poses a question—what do you think you’re doing? Do you, by chance, think God is impressed?

If Valentine’s Day is about the incommensurability of feeling and gesture, Ash Wednesday presents us with the ultimate insufficiency of even our feelings. Whatever suffering we can give God for our sins isn’t enough; even our mortality, somberly contemplated and offered up, is not ours to give. It’s not that we go to God full of penance that is poorly represented by a ritual, but that the ritual itself expresses our need and our state with more force than we can. Insofar as it’s a public declaration of an internal truth, we’re aware that we are trying to express something that God might want us to tell Him, but already knows.

So Ash Wednesday launches us into Lent by casting some cold water on the whole enterprise. This is necessary, because if we took ourselves too seriously, we might miss the point. Our insufficiency isn’t the end of our story; it’s the beginning. Tragedies, as Dante once wrote to his patron, have admirable beginnings and smelly endings, but “comedy begins with harshness in some thing, whereas its matter ends in a good way.” And the story of Christ’s love for us is a comedy, maybe even a romantic comedy, in which we come to see both our sinfulness and our lovability.

A few months ago, this dimension of things was illustrated for me in a strange way. I found myself talking with a priest about a spiritual problem of mine. He wasn’t my priest; I’d never met him before. I wanted, as quickly as possible, to disabuse him of the notion that I was a good person or that I thought I was. In the middle of our conversation, as I continued to talk in a fairly dispassionate tone about myself, the priest began to cry. Though I was, in fact, full of self-pity—and still am—that somebody else could cry for me was not something I expected. He continued to cry throughout our conversation. (Not always, I should add, over me.)

More than almost anything he actually told me, it’s his tears that I remember. I was, after all, being honest about myself, clear-eyed about my own failings, and it was not an especially pretty picture. His tears asked me: What if that honesty, on which I prided myself so much, wasn’t enough?

The bad joke of Valentine’s Day and Ash Wednesday delivers the punchline of Easter falling on April Fool’s this year, surely itself a setup to a thousand strained Easter sermons. At the end of forty days of fasting, you will go to the tomb to behold the love you killed, and find the stone rolled away for you, and Christ alive. Our last and most irrevocable failure will have been overcome for us. Christ will triumph over death and sin, something we cannot do even through stoic acceptance of our lot or clear-sightedness or even our repentance, however real these things are.

Yes, you’ll suffer on the way to the tomb. But that’s how all good comedies go.