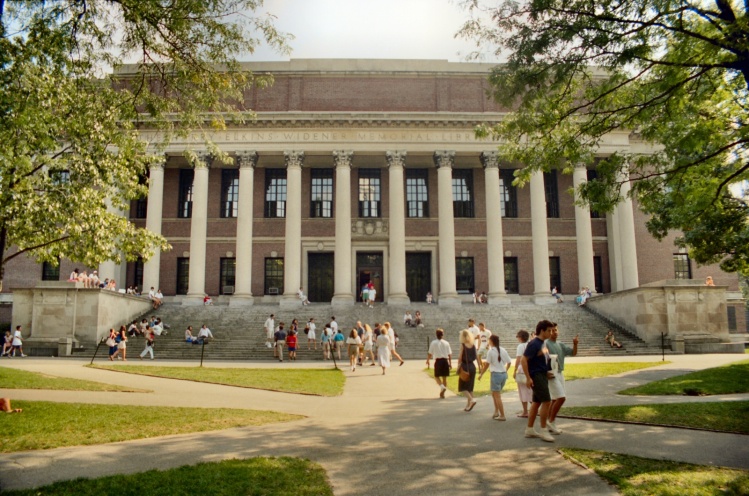 No, it’s not oral surgery. I’m talking about the college application process.

Is there anyone who thinks that the American system of higher education, and specifically admission to it, is rational or fair? How can it be, when some high-school seniors apply to as many as thirty colleges and universities, and lawsuits determine and delimit admissions procedures, and certain students get educated for free while others pile up $100,000 in debt, and elite institutions profess disdain for elitism even as they do everything they can to boost themselves higher on a college selectivity list propagated thirty-five years ago by a failing newsmagazine desperate to attract attention and boost its own ratings?

It’s worth remembering that most colleges in the U.S. are nonselective, and that the admissions mania afflicts only a relative handful of elite institutions. The Ivies, Stanford, and the small liberal-arts schools like Amherst and Williams occupy an outsized place in our academic culture. Well, that’s one definition of being elite. In fact, they’re important because they are elite; because they have traditionally acted as gatekeepers to the ruling class. They are the aperture. Who gets to pass through?

Before I get to that question, let me pause to paint a larger picture of things askew in higher education. A friend who teaches at the University of Colorado recently gave me a tour of the Boulder campus, including the mammoth new student recreation center. I walked through it agog at the sheer dazzling opulence of the leisure amenities it contains (you can check it out here and here and here.) I confess to feeling a certain crankiness at the prospect of educational institutions competing for customers—I mean, students—on the basis of luxuries befitting a pasha. Why should such luxuries attach to higher education? Why should taxpayer dollars—or indebted students’ dollars? or anyone’s dollars?—pay for them? I told my friend that if I were running a college, I’d spend all the money procuring great teachers and state-of-the-art research facilities...and let the students have the same spartan dorm and cafeteria experience I had in college, decades ago.

My friend smiled. Go ahead, set up your little academy with its Socratic, great-books idealism and its crappy fitness center and bare-bones rooms. They will not come. His point is that a society gets the education system that reflects its core values. We’re a competitive and materialistic society, so is it any surprise that our college system is the same?

A society gets the education system that reflects its core values. We’re a competitive and materialistic society, so is it any surprise that our college system is the same?
sharetweet

In a recent article titled “Secrets of Harvard Admission,” the New York Times delved into what goes on behind the closed doors of the most competitive admission process of all. Harvard accepts just 4 percent of its applicants, and the article begins by profiling one who had double 800s on his SATs and perfect 5s on nine AP exams—nine!—and was ranked first in a high-school class of six hundred. And did not get into Harvard. He’s not unique. Harvard could have filled this year’s entering class twice over with applicants whose SATs were perfect.

Against this backdrop, the article explains who does get in to Harvard, and how. In the process it delves into the bureaucratese of the admissions game, the terms of trade Harvard uses—“dockets,” “the lop list,” “tips,” “DE,” the “Z-list”—to construct an undergraduate demographic that fits its vision of diversity, in which perfect SATs are far from the be-all and end-all. Those “dockets” refer to two dozen geographical regions Harvard divides the United States into, giving priority to, say, North Dakota, where applicants are rare, over, say, New York, where they abound. After that, admissions officers rate applications in five categories—academic, extracurricular, athletic, personal, and “overall”—then supply “tip” factors in five more: racial and ethnic minorities; the children of Harvard grads; relatives of a significant donor; children of faculty members; and recruited athletes. At the close of the process, the final list has some students “lopped” off, as the new class is aligned with diversity goals.

The result last year—Harvard’s class of 2021—was 14.6 percent African-American, 22.2 percent Asian-American, 11.6 percent Hispanic and 2.5 percent Native-American or Pacific Islander, according to Harvard’s website. These numbers are notably consistent from year to year—and from one institution to another among the most selective schools.

That consistency is now receiving legal scrutiny via a lawsuit accusing Harvard of discriminating against Asian-Americans in its admission policies. Remember that kid with the perfect scores who didn’t get in? He was Asian-American, and according to the lawsuit, he should have gotten in. The Harvard case is being brought by a conservative group called Students for Fair Admissions, which has filed similar suits against the Universities of North Carolina and Texas, arguing that racial preferences amount to an illegal quota system, and attempting to spur the federal government to withhold funds under Title VI of the Civil Rights Act of 1964, which forbids racial discrimination in programs receiving federal money. It’s this lawsuit, with its mustering of relevant documents, that gave the Times its peek into the secrets of Harvard’s admissions office.

The lawsuit is a kind of Trojan horse. Filed on behalf of Asian-Americans, it has an ulterior goal—namely, to make it harder for colleges and universities to pursue affirmative-action admission policies benefiting African-American and other minorities. (The Trump Justice Department has also focused on discrimination against Asian-Americans at Harvard, with similar evident goals and motives.) There’s a certain cynicism in a special-interest group using Asian-American students as the bulldozer to demolish what it views as an edifice of discrimination against white students. That said, the lawsuit scores some points, as the Times article makes clear in its review of Harvard’s decision-making process—specifically, the use of vague criteria and subjective judgments that clearly disfavor Asian-Americans. As the lawsuit charges, these seem to traffic in stereotypes that work against Asian students, rating them lower on such squishy concepts as “positive personality.” The Times notes that

In the recently unredacted court filings, several Asian-American applicants were described in conspicuously similar terms. One was described as “busy and bright”... Another was “very busy” but “doesn’t go extra mile, thus she looks like many w/ this profile.” Yet another was “bright & busy” but it was “a bit difficult to see what would hold him in during a lop.”.... One student was “so very bright but lacking a DE.” DE, the court papers say, stands for “distinguishing excellence.” Another got a backhanded compliment: “hard worker,” but “would she relax and have any fun?”

Since when is the capacity for fun a qualification for college? It’s hard to disagree with Students for Fair Admission when it charges, in a court document, that “Harvard today engages in the same kind of discrimination and stereotyping that it used to justify quotas on Jewish applicants in the 1920s and 1930s.” The group’s brief details the history of anti-Jewish admission policy at Harvard during that era, describing how, in order to stem the increase in Jewish acceptance, Harvard added subjective criteria (character, personality, etc.) to the requirement of academic excellence—thus committing the “original sin of holistic admissions,” the plaintiffs assert, in a trenchant phrase.

But would a less “holistic” approach based purely on academic merit be better, as the lawsuit implies? What, really, is “pure” academic merit, and should it be the only criterion for admission? In a 2013 internal review, Harvard estimated that if only test scores and high-school grades were considered in admissions, the Asian-American population on campus would double to around 43 percent—pretty much exactly what has occurred at UC Berkeley following California’s ban on racial preferences. Harvard also predicted that the number of black and Hispanic students would drop significantly—as it has at Berkeley.

Humility, perhaps. But the very metaphor presupposes terrific importance. Who, after all, gets judged by history, other than the mighty?
sharetweet

Is such a development desirable? Is it necessary in the name of fairness? Where is fairness owed? Is it to individual students, or to the social entity as a whole, with the realities of history—and the priorities of democracy—figured in? On the other hand, why is it that despite a long history of being discriminated against, Asian-Americans don’t qualify for the affirmative-action status that other minorities do? These are not easy questions to answer. But I for one don’t believe they are best answered via a narrow definition of academic merit.

Does it matter who goes to elite schools? One notes the prevalence of elite-school graduates on Wall Street and on the U.S. Supreme Court, not to mention among the Bill Gateses and Mark Zuckerbergs atop the corporate world. Harvard alone has had one hundred and fifty Nobel Prize winners and one hundred and twenty-five Pulitzer Prize winners among its ranks. And a 2015 study revealed that the median Ivy League grad earns more than twice as much, ten years after graduation, as other college grads. In light of these realities, doesn’t it make sense to provide access to as wide a range of Americans as possible, in precisely the way that was not done for the first two hundred years of these institutions’ existence? In a follow-up article, the Times reports that sixteen other elite colleges have filed an amicus brief supporting Harvard, emphasizing “the profound importance of a diverse student body” to their educational mission.

Reading the Times article, one marvels at the supreme confidence shown by these gods of social engineering as they go about allocating destinies to the crowd clamoring at the gate to Harvard Yard—their self-declared goal of assembling a class of “citizens and citizen-leaders,” as Harvard’s mission statement puts it, who will shape the future of American society. “I have a great deal of humility knowing that some day history will judge us,” says the dean of Harvard College, Professor Rakesh Khurana. “I think that’s why we are constantly asking ourselves this question: How can we do better? What are we missing? Where are our blind spots?” Humility, perhaps. But the very metaphor presupposes terrific importance. Who, after all, gets judged by history, other than the mighty?

The Times columnist Frank Bruni has written extensively about college admission and its excesses; his 2016 book, Where You Go is Not Who You’ll Be, was subtitled, “An Antidote to the College Admissions Mania.” Describing the current “frenzy” to get into elite colleges, he attributes it to a combination of factors, “including contemporary America’s exaltation of brands and an economic pessimism that has parents determined to find and give their kids any and every possible leg up.” Bruni concludes that such realities have led to “a perversion of higher education’s purpose and potential.” It’s enough to make one long for a different system, a different way of doling out access to the best educations. Like maybe putting names in a big hat. Would that be so much worse?