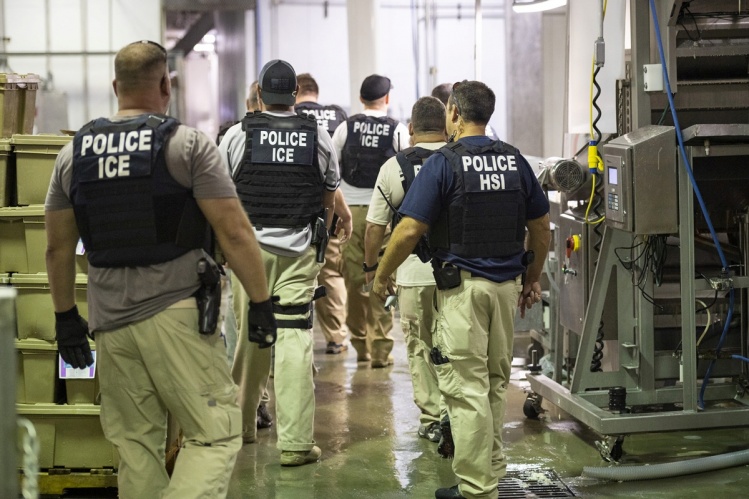 In one of many astonishing scenes in the six-part Netflix documentary Immigration Nation, a federal agent sent out to arrest fugitives gets a radio message from his boss telling him to nab some “collaterals” as well.

That’s the term for the unfortunate immigrants who aren’t on the list of targets for an Immigration and Customs Enforcement raid but happen to be in the wrong place at the wrong time. “I don’t care what you do, but bring at least two people in,” he is ordered. What that means is that he has just been cleared to arrest people who, unlike the fugitives on his list, aren’t accused of any crime.

“I don’t do collaterals. I just don’t think it’s right,” the ICE agent, identified only as Brian, says after he signs off. “Like if I get somebody that’s not cooperative, it’s a different story. But if you let me into your house and talk to me, I’m not going to roll your fingerprints and arrest you just because you’re here illegally. I know it’s my job, but I’ve got guys that are aggravated felons that I’d like to catch. I don’t care about the guy that minds his own business and is cooperating with me. Just for the sake of numbers, anyway.”

What struck me most in this chilling documentary is that quite a few of the ICE agents interviewed were wrestling with moral qualms over arresting immigrants who, while lacking authorization to be in the United States, happen to be good, hardworking people. Oftentimes, they have fled very dangerous situations in their homelands. It’s easy to see why the agents struggle to justify their work: every episode has long, emotional interviews with jailed immigrants whom ICE agents have torn from their children or other loved ones.

As an occasional observer of the immigration court in New York, I’ve seen this play out before. An immigration court is a deep pool of human misery, and the people facing deportation are not the only traumatized party. The heartrending stories they tell tend to ring true, but the hardships often fail to fit the contours of U.S. immigration law and, more recently, the Trump administration’s relentless drive to narrow its interpretation. And so, in case after case, very bad news is delivered to people who often seem to be heroes. The judges (who are hearing officers appointed by the U.S. attorney general, rather than judicial-branch adjudicators), the ICE lawyers, the immigrants’ attorneys: many of them seem stressed out by this work. Donald Trump’s contribution has been more than four hundred executive actions aimed at eliminating the last bit of breathing room for compassion that the law allows.

Beyond the damage to unauthorized immigrants and their families, the system takes a toll on any conscientious person trying to work within it.
sharetweet

Those dubbed “illegal aliens” have often not violated any law: they are people who presented themselves to the authorities at an official port of entry and declared that they want to seek asylum in the United States of America. Under the Trump administration, they are nearly all jailed, with ICE frequently denying them their right to a routine review of a parole request, as federal courts have found. This applies even to those whom an initial hearing officer had determined did indeed have a “credible fear” of returning home to face persecution.

This system, shaped by a 1996 immigration law that President Bill Clinton signed a month before his reelection, is unjust. Beyond the damage to unauthorized immigrants and their families, it takes a toll on any conscientious person trying to work within this system. Michael Kagan, the director of the immigration law clinic at the University of Nevada in Las Vegas, relates this in his fine new book, The Battle to Stay in America: Immigration’s Hidden Front Line. In addition to serving as a readable primer on the terribly complex immigration system, it’s a personal account of his journey within it. After having to deliver life-altering bad news to yet another immigrant client, he returns home prone to anger. His wife tries to get him to calm down, but he can’t. “I don’t tell her what’s bothering me, either. Sometimes I don’t immediately know,” he writes. “There’s just so much bad news in my email.”

With morale plummeting, many immigration judges have left the Department of Justice over the past four years. “I resigned this March because I could no longer in good conscience work as an immigration judge in the Trump administration,” one of them, Ilyce Shugall, wrote in the Los Angeles Times. “I knew when I joined the bench that there would be frustrations, as immigration courts are governed by the Justice Department and lack the independence of other courts in the federal judicial system. But nothing prepared me for the unprecedented, unfair and unworkable policies the Trump administration imposed on the courts and the immigration process.”

ICE lawyers and agents work within the Department of Homeland Security, which has been plagued with morale problems since its founding in 2003, according to government reports. Under the Trump administration, this has been the case even within the highest levels of the agency. When Kirstjen Nielsen resigned as the DHS secretary in 2019, she told PBS, “What led me to resign is there were a lot of things that there were those in the administration who thought that we should do. And just as I spoke truth to power from the very beginning, it became clear that saying no and refusing it to do it myself was not going to be enough. So it was time for me to offer my resignation.”

The rationalizations that ICE employees offer in Immigration Nation boil down to “we are only following orders.” But that phrase, borrowed from Nuremberg, only heightens the unease. Some of the agents, particularly supervisors, are downright gleeful about bagging immigrants as if they were game to be tracked down.

The “collaterals” that the documentary shows being arrested during Operation Keep Safe in April 2018 were packed into a system that wasn’t ready to handle them. According to court records, the people detained by ICE agents in New York that month typically spent two months in jail before they had their first hearing before a judge (criminal courts are expected to arraign a defendant within two days)

The rationalization seen most often in the documentary is that someone else is making the decision. The agents who go out and make arrests are just doing what their supervisors ordered. “I’m not a judge,” says an agent named John. “My job is just to remove you. It’s in my title: deportation officer. It’s not personal. It’s business.” He adds that two relatives of his who came to the United States as young children were deported: “My family went through it.”

One supervisor said many people asked him how he could do such a job. In a particularly moving scene, he clears the way to deport a man who had been a police officer investigating gangs in his home country. He fled to the United States because his honest police work had put him in danger, according to a former NYPD detective who said the man had bravely helped him investigate gang activity.

The supervisor explains: “It can be morally wrong or objectionable, but in the grand scheme of things, as harsh as it may sound, the government didn’t hire me for my moral views.”

A Priest Stands up to Genocide in Central African Republic