A Cloud over Xanadu 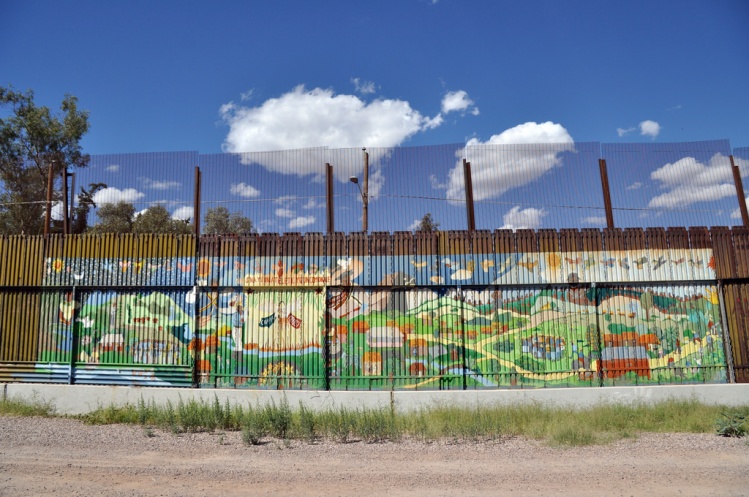 Mural art on the Mexican side of the wall in the city of Heroica Nogales that divides the Mexico from United States.(Jonathan McIntosh)

To get away from another winter in Minnesota, my wife and I recently spent some time in the Mexican beach town of Tulum. The shimmering sun on the aqua-blue water, a cooling breeze, and the music of the waves sifting through the sands all had the intended effect. A sense of peace and gratitude filled my otherwise overheated skull. We had found our Xanadu.

But the peace was soon disturbed by a nagging thought. It suddenly occurred to me that all the undocumented Mexicans back in the United States couldn’t risk coming back home to Mexico, not even for a visit. While this gringo is allowed to sit at a restaurant on the beach sipping margaritas, they live in exile.

As a boxing trainer, I have coached many young people without papers from south of the border. I have been privileged that my fighters and their families, people who live in perpetual fear of deportation, have opened their hearts and shared their lives with me.

For example, one Saturday morning I took a professional boxer I had just started training to a gym in the city. We were an hour early and so we just sat there in my pickup truck, waiting for the sweat parlor to open. His English was just a little stronger than my low-level Spanish, so there wasn’t much we could talk about. It was awkward. But that morning, there just happened to be a children’s book on the front seat and the professor in me got to thinking—this guy has two young kids and one of the most important predictors of academic success in the United States is how many words you hear in English as a child. With that in mind, I got the bright idea that I would ask this very tough and taciturn warrior to read to me. The book was the The Big Porcupine. I gathered my courage and pressed, “Fernando, can you read this?” Nervously, he took the second-grade reader and began fighting his way through it.

I could hardly believe that this professional fighter, who happened to be one of the best and toughest in his weight class in the country, would let himself be so vulnerable. There are certain letter combinations in English that seldom occur in Spanish, such as the sound of “sk,” so he struggled and we laughed when he stumbled across the word “sky.” Up until that moment, I had been inclined to pat myself on the back for volunteering so much of my time to “work with kids.” That morning slapped a lot of sense into me. It helped me to stop thinking of myself in the patronizing terms of the do-gooder “giving back” or “doing a service” and to appreciate the gift that I was being given—the gift of finding out what it meant for someone to let you into their lives.

I have been at the boxing game for years and so some of my pugilists are not so young anymore. Their parents are aging but even when their mom or dad is knocking on heaven’s door, they can’t go back home. Our Bodhisattva of a parish priest, Fr. Denny, travels south every summer and tries to visit the families of our many Mexican parishioners. It doesn’t require much imagination to grasp what a shot to the liver it must be not to be able to be there when your dad suffers a heart attack. There is no ocean to keep them apart from their families, and yet the so-called illegals are most likely cut off from their roots for the long time that is forever.

The tragedy of this diaspora was enough to make me think that maybe we should have vacationed in Florida. Yes, tourism is good for the people here, but given our immigration policy, the palaver about a border wall, and much worse, I couldn’t help feeling like an invader enjoying a vacation in an occupied country. There is much talk and a good deal of self-flagellation about privilege these days—well, here is a window onto real privilege. Once again, I can enjoy Mexico but millions of Mexicans in the United States cannot—not without forfeiting the life they and their families have north of the border.

Truth be told, if I were one of the white-coated waiters tromping through the sand, toting drinks to the sunburnt, beached whales of Americans like me, I would have daggers in my heart. And, given the president we elected, hammer and tongs as well. But the waiter and locals in town must know something I don’t about life. Nearly everyone is friendly and even affectionate. I could be missing something—once again, my Spanish is not the best—but they don’t seem to hold our luck against us. It is a humbling experience, and an inspiring one. It has inspired me to redouble my efforts to fight for the Dreamers and immigration reform now that I’m back home.