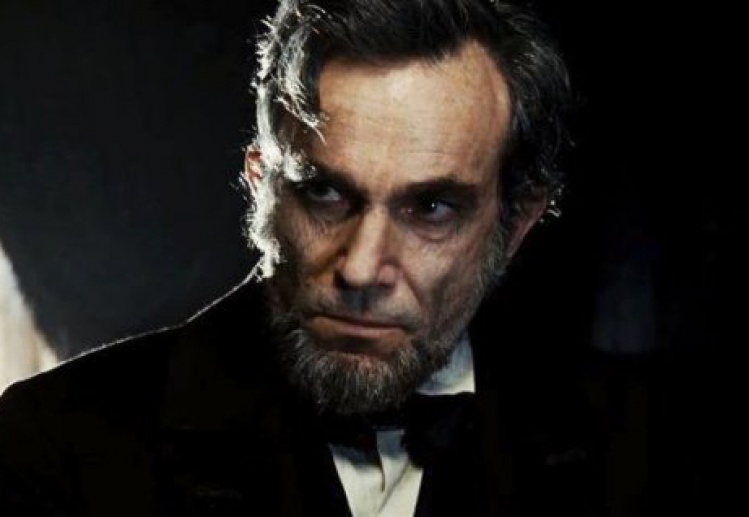 In the foreground of Steven Spielberg’s Lincoln is the thrust and parry of politics—powerful men competing to control the conclusion and aftermath of the Civil War. But behind the noisy congressional squabbling and the snide muttering of backroom deals you can hear a muffled death knell. Young men have been slaughtered; old men are taking stock. The president surveys battlefields strewn with corpses and hears the testimony of black soldiers admitting, even quietly boasting, that they showed no mercy to the foe because they knew they themselves would be shown no mercy if they fell into Confederate hands. Lincoln (Daniel Day-Lewis) has nightmares of standing on the deck of a phantom ship heading into fog. His recounting of these dreams to his wife (played by Sally Field) does nothing to relieve her endless mourning for their dead child, Willie, or to allay her terror that their eldest son, Robert, will be killed if he’s allowed to enlist. However hard he bargains for liberation and reconciliation, it’s clear that the president is laboring in a valley of death.

Many other political players are also performing under dark clouds. Congressman Thaddeus Stevens, played by Tommy Lee Jones, still spews forth abolitionist scorn for his opponents. But there’s a jadedness in his voice, as if the doughty warrior has been battling for too long against too many men beneath his contempt, though an occasional glint in his eyes tells us he sees victory in the offing. As Preston Blair, one of the founders of the anti-slavery Republican Party, eighty-seven-year-old Hal Holbrook gives us not a lovable old codger but a party boss provoked to querulousness by mounting terror that his son, a soldier, might be killed before the war ends. Even the seemingly more robust men, Secretary of State Seward (a steely David Straithairn) and General Grant (the quietly potent Jared Harris) seem so abraded by the war that any sort of conclusion to it, no matter how compromised, must be a deliverance.

This pervading melancholy, abetted by the subdued palette of Janusz Kaminski’s cinematography and the shabby textures of Rick Carter’s sets, isn’t just atmosphere but a dramatic device that fortifies the suspense of Tony Kushner’s screenplay. Kushner has focused on Lincoln’s struggle to push through Congress the Thirteenth Amendment abolishing slavery. Because some Union politicians are so eager for peace they may be willing to let the “peculiar institution” continue in the postwar South, Lincoln must be politically double-jointed, if not downright duplicitous. He must privately encourage treaty negotiations while publicly denying they even exist until the amendment is passed. The autumnal visuals of the movie, evocative of mortality, make us feel the great attraction of peace to the war-weary. This gloom must be lifted! But to achieve his ends, Lincoln must keep it from being lifted too soon. Hence the movie’s underlying tension.

Spielberg’s strategy might have backfired if the visuals had been too gloomy, or the pace too funereal. But he remains showman enough to keep us supplied with an abundance of savory, poignant, and even comic details that rivet us to Kushner’s narrative without ever diluting its seriousness. Look at the way Secretary of War Stanton (Bruce McGill) remains stubbornly unsmiling during Lincoln’s jocular anecdotes, while the other cabinet members chuckle indulgently. As Stanton and Lincoln await news of a crucial battle, Stanton even storms to the other side of the telegraph room rather than hear another of the president’s corny stories. Yet seconds later his hand clasps Lincoln’s as the report clicks in. There’s no close-up of this poignant detail; Spielberg simply lets us notice it.

Or consider how Mary Lincoln, during a particularly anguished quarrel with her husband, suddenly sinks to a sitting position on the floor while continuing the argument. There is both weakness and strength here: the already diminutive woman has further shrunk herself before her towering husband; yet she also seems to be anchoring herself to the floor, her immovability forcing him to hear her out.

To ensure enough votes for the amendment, “Honest Abe” is not above using political fixers, who offer bribes and put all sorts of pressure on wavering congressmen. These scenes of the helpful scoundrels at work lighten the movie’s mood, but also fill out the portrait of Lincoln as a political animal who, far from shedding his frontier roughness, is willing to get down and dirty in the right cause.

Not everything in Lincoln works. There seems to be a complex antagonism between Thaddeus Stephens and Mary Lincoln that must be rooted in something more than the reasons provided by the script (he heads a committee that has investigated her use of public money). Although the scenes between Mary and Abe are well written and brilliantly acted, their sons, Robert and little Tad, become clichéd figures of, respectively, sulky adolescence and cute brattiness. Worst of all, the last three or four scenes of Lincoln are redundant. The New Yorker’s Anthony Lane was right to point out that the movie really should have ended when the president walks down the hallway toward the carriage that will take him to Ford’s Theater—a gorgeous valedictory image. The following scenes concerning the response to Lincoln’s death seem perfunctory and unrelated to Kushner’s dramatic focus. And the flashback to Lincoln’s second inaugural speech, though nicely delivered by Daniel Day-Lewis, should have been the movie’s opening scene, not its retrospective conclusion.

That brings us to Day-Lewis himself. It’s not as if the cinematic portrait gallery of Lincolns were sparsely furnished. Walter Huston, Henry Fonda, Raymond Massey, and Hal Holbrook (in a 1980s miniseries) are merely the first bunch that come to mind. And though Day-Lewis’s physical performance—the shuffling walk, the way the ungainly giant with the loosely strung limbs layers himself into a chair every time he sits down—is irreproachable, other actors have been sufficiently convincing in this regard. Even the vocal timbre, reedy rather than resonant, isn’t much different from the twang of other Lincolns.

What does set this portrayal apart from, even above, its predecessors are two qualities: its subtle display of the man’s keen intellect and a tightly leashed fierceness. Here is an autodidact in love with the power of reason, the power that has elevated him above frontier barrenness and made up for his lack of formal education, the power he clings to as he’s battered by political strife and domestic woes. When the president, chatting with two young telegraphers, uses his rudimentary understanding of Euclid to illustrate his vision of equality, Day-Lewis makes us feel that for this man cogitation, and its lucid expression, is an act of self-preservation.

Yet when reason is defied it can make the reasonable furious, and Day-Lewis’s brand of fury is pretty awesome. This is, after all, the actor who gave us the maniacal oil baron of There Will Be Blood and the tantrum-throwing poet Christy Brown of My Left Foot, and his capacity for rage hasn’t been diminished by all the praise and awards of recent years. When Lincoln storms at the pusillanimity of his cabinet, proclaims himself “clothed in immense power,” and demands that they find a way to pass the amendment (“now, now, NOW!”), he puts paid to the cozy popular image of Lincoln as a paragon of infinite humility and saintly patience.

The sixteenth president of the United States loved Shakespeare, and, thinking of that melancholy man roaming through the White House corridors late at night, I’ve always associated him with Hamlet. Thanks to Spielberg, Kushner, and Day-Lewis, I may now think of him less in connection with Denmark’s prince than with Machiavelli’s. Of course, “Father Abraham” was a Machiavellian with heart.