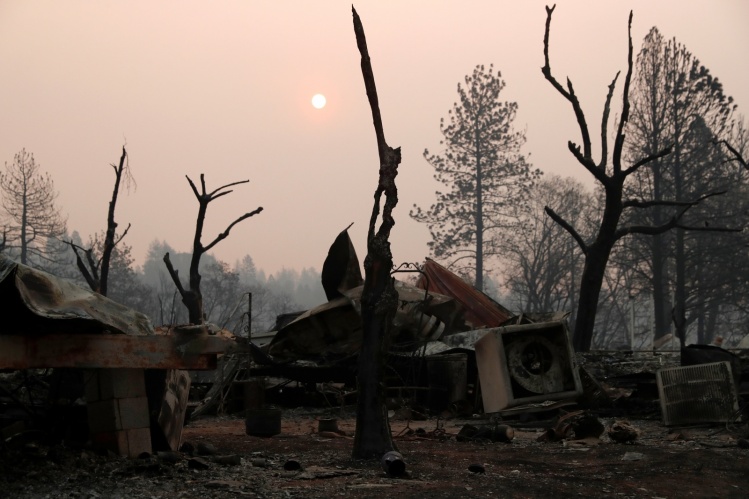 If you lived through historically deadly wildfires in California this fall, or catastrophic flooding and storm surges from Hurricanes Florence or Michael, or record-setting heat and rainfall that afflicted large swaths of the country for much of the year, then the main message of the U.S. government’s National Climate Assessment released the day after Thanksgiving may come as little surprise: “The assumption that current and future climate conditions will resemble the recent past is no longer valid.” Of course, the vast majority of the scientific community, along with a growing number of ordinary citizens, have been working their way toward this sober conclusion for some time now. Climate science can be complicated, as climate-change deniers are fond of pointing out. But a general trend is clear even to non-scientists. The past thirty years have included twenty of the hottest ever recorded; entire ecologies seem to be transforming before our eyes. The president can tweet ignorantly about a brief, localized cold snap or hold to the wholly uninformed opinion that the climate will “probably change back,” but the government’s report is a damning verdict on the damage that fossil-fuel emissions have wrought: “It is very likely that some physical and ecological impacts will be irreversible for thousands of years, while others will be permanent.”

The climate assessment—which is required by Congress—draws on the work of hundreds of scientists, synthesizes thousands of studies, and is endorsed by NASA, the Department of Defense, and eleven other federal agencies. In warning that drought and sea-level rise could cause severe humanitarian crises by the middle of this century, it echoes the dire findings of the U.N.’s October report on climate change. It also lays out the potential financial toll. Climate change could reduce projected U.S. gross domestic product by 10 percent before the end of the century, costing the economy twice as much as the 2008 recession. Heat-related deaths and infrastructure damage are likely to impose hundreds of billions of dollars in costs. Trade and agriculture are particularly at risk. Extreme weather events will damage factories and disrupt supply chains, leading to shortages in critical goods worldwide. Higher temperatures and heavier rainfall will reduce the yield and quality of crops and livestock. By 2050, the agricultural productivity of the Midwest will fall to 1980 levels. It is already too late to avert some of these effects, the report says; at best, we can try to mitigate them.

Anger over denialism is appropriate, but we cannot wallow in it. Nor should we succumb to despair.
sharetweet

The timing of the report’s release—on the afternoon of Black Friday and two weeks ahead of its originally scheduled public presentation—was clearly an attempt by the Trump administration to bury politically inconvenient news. After all, it contradicts the president’s pronouncements and the position of many Republican politicians in the pocket of the fossil-fuel industry. Trump officials, seeking to undermine the report, are calling it “made-up hysteria” and a product of the deep state. Their response to the findings, summed up literally by a member of the EPA transition team, is: “We don’t care.” Oil companies—ExxonMobil most notoriously—long hid their own research about the damage their product was doing to the planet and instead ran public campaigns to sow confusion about climate science. Now an American president and his party are openly deploying the same strategy. This is not good-faith disagreement with data, but denial of the facts in the name of profit and political gain.

Yet the con might work for only so long. Princeton University’s Mark Oppenheimer, who helped author the October U.N. report, told PBS NewsHour that “the science is so compelling and the consequences have been so vivid that in a way this has liberated the scientists who are doing these kinds of assessments to really say what's been on their minds for the whole time…. The clear messages are coming through.” Experts say the report is likely to be used in court to challenge federal energy and environmental policies, and could be used to garner further legislative support for a “Green New Deal” that would fully ween the United States off fossil fuels within a few decades. Polls show that by a large margin Americans believe more needs to be done to combat climate change. Alternative energy technologies are getting cheaper and more efficient, while activism is on the rise worldwide. Anger over denialism is appropriate, but we cannot wallow in it. Nor should we succumb to despair. The same science that proves we are responsible for climate change gives us reason to believe that we can do something about it. This is not an Act of God but a human mistake, and one we know how to fix. What are we waiting for?