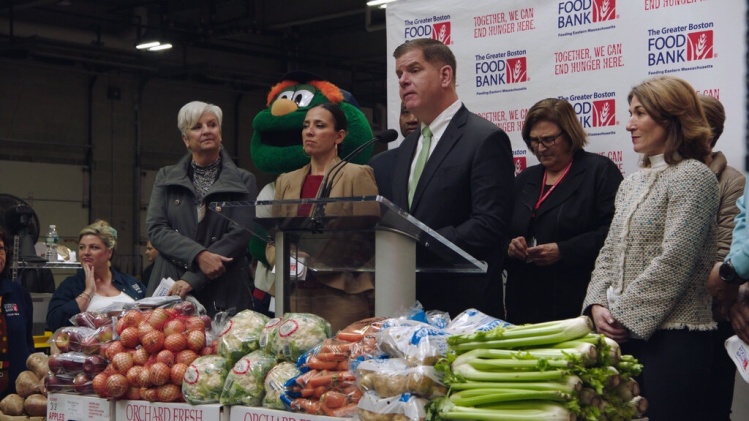 The eponymous city hall of Frederick Wiseman’s latest documentary is Boston’s, but near the beginning of the film comes a scene that calls back a moment from his magisterial 2015 project, In Jackson Heights. We see Marty Walsh, the genial mayor of Boston, attending a jubilant Red Sox World Series parade, an overwhelmingly white affair marshaled by a polite police presence. In Jackson Heights also features the celebration of a sporting victory, as patrons of a Colombian restaurant in Queens spill out onto the sidewalk and occasionally into the street after a soccer game. With his multiple cameras, Wiseman does his best to navigate the throngs of revelers, a job made harder by sudden, pointless, and wincingly violent arrests, all of people of color. The Boston police mosey along in their reflective jackets, ignoring the screams of the crowds; the NYPD positions snipers on nearby roofs. The contrast could not be starker.

Over his fifty-plus years of filmmaking, Wiseman (now ninety) has always surveyed his subjects from a critical distance, never explicitly commenting on what he shows us but rather letting viewers make their own assessments about what they’re presented with: whether they see bias, or police brutality, or spontaneous and touching moments of community, it’s up to them. His method is simple in conceit, so much so that he’s been lumped in with direct-cinema or cinéma vérité luminaries like D. A. Pennebaker and Albert and David Maysles. Occasionally––and unjustly––he’s been characterized as being exclusively committed to confrontational exposés, but in a 2015 interview following the release of Monrovia, Indiana, Wiseman succinctly summed up his considerably more nuanced approach: “[I’m] more interested in treating a subject to reflect its complexity.”

Elsewhere, he’s aptly described his method as “novelistic.” As both a fly on the wall and as his own editor, Wiseman subtly manipulates situations to give a wider scope to the events transpiring, from frequent cuts among multiple cameras to diegetic audio captured on location. In City Hall, as with practically every Wiseman documentary, there’s a literary bent to the way moments are catalogued, whether deadening bureaucratic meetings or the inspiring successes of vital public works.

Indeed, the relationship between governmental shortcomings and governmental success seems to be the very subject of City Hall—a dichotomy captured by Wiseman as he sweeps nearly the entirety of Boston. It’s a fertile subject for film, given Boston’s place in the pantheon of American history and current demographic reality as a majority-minority city. For every step made in addressing food insecurity, there’s a high-level transit cop complaining about the unhoused, rudely and unfoundedly positing that “30 percent probably aren’t even homeless.”

The relationship between governmental shortcomings and governmental success seems to be the very subject of “City Hall.”
sharetweet

The well-meaning, salt-of-the-earth Walsh appears in almost two-thirds of City Hall’s four-and-a-half-hour runtime. He speaks at senior-citizen community meetings, a Goodwill-sponsored Thanksgiving banquet for the handicapped, food-bank pressers, and veterans’ associations. Even if he’s not the leader of some meeting or session, he can still be spotted somewhere in the room, as common as the paper coffee cups––sometimes emblazoned with the Dunkin’ Donuts logo––nearly every person seems to be clutching.

Wiseman balances scenes of near-utopian governmental helpfulness (Bostonians are shown successfully appealing their parking tickets) with scenes of helplessness and structural inequity (when an elderly Black woman tells Walsh that she can’t afford her co-pay, his only response is “We’ll have to tackle that legislatively.”) One of the mayor’s main aims is to protect Boston’s sanctuary status and project it on the national stage, pushing back against the current national administration, which itself is almost never mentioned by name. Yet Wiseman stays focused on the countless, local-level issues that also need to be addressed, cutting, for example, from a straitlaced formal affair to a meeting drowning in red tape over how to get a wheelchair ramp installed. Meetings like these are closely chronicled, and often we don’t learn whether the problems discussed are ever resolved.

There are other, interstitial moments of comparable brevity that also help provide the sense of a living city. At a Goodwill Thanksgiving banquet, we spot Massachusetts Sen. Ed Markey serving mashed potatoes. We witness an officiated wedding in a City Hall cubicle block. There’s a spate of police meetings not unlike those in Wiseman’s Law and Order, though these now feature a conspicuously displayed Blue Lives Matter flag. There’s a Chinese New Year’s celebration  downtown. And in a moment that offers odd visceral satisfaction, garbagemen load all kinds of household trash into their compactor, including a mattress and a four-burner grill. Wiseman’s fluid moves among scenes and locations produces an effect not unlike clicking along a street view on Google Maps.

The matter of gentrification also comes up in City Hall. Walsh espouses the opening of acreage for development along the harbor, and from there, Wiseman takes us to one of the unfinished condominiums, where an inspector remarks: “It’s not a bad view until that next building gets built.” Then, near the end, there’s a protracted scene of a community board meeting, at which  standard myths of collective progress are challenged. As residents of the Dorchester neighborhood warily question the arrival of a marijuana dispensary, we learn that the city has no interest in relaxing the possession laws or otherwise addressing the needs of people of color who have been targeted by oppressive drug-enforcement policies. It will even prioritize the new business over the community’s necessary lifelines, such as their Walgreens. The dispensary seems meant to appeal more to the people from outside Dorchester, as is confirmed when the matter of the resulting increase in traffic congestion is discussed.

Early in City Hall, Walsh uses the term “civic art.” Presumably, this refers to the combination of performance, promotion, and presentation necessary to running a major municipality. But art can still be inexpertly executed. Following the Red Sox parade, the film cuts to Walsh addressing a room of Latinx women, where he tries to encourage their participation in government by recalling how he was mocked for his Irish upbringing. Walsh’s attempt at bridging the gap is oblivious, while underscoring how thoroughly institutionalized the lack of representation has become. The mayor seems, for lack of a better phrase, a good guy, and his empathy is palpable, but that by itself doesn’t turn aspirational aims into quantifiable betterment.