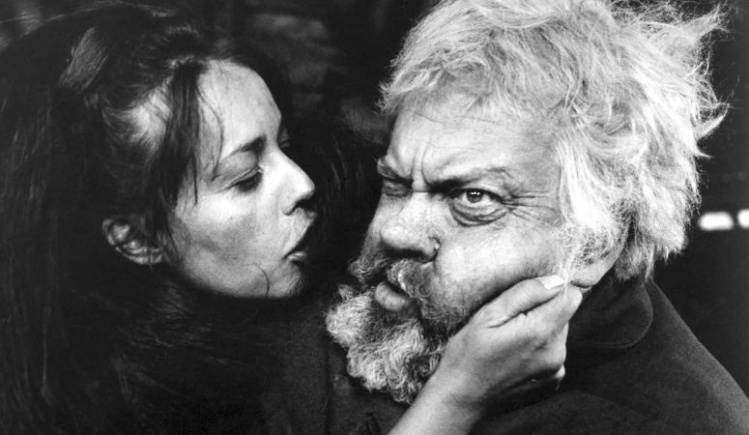 Just in time to relieve the post-Oscar doldrums comes the reappearance of Orson Welles’s Chimes at Midnight, the 1966 adaptation of Shakespeare’s two Henry IV plays. It is a work that I believe will come to be regarded as one of Welles’s four greatest films, along with Citizen Kane, The Magnificent Ambersons, and Macbeth. This digital restoration by Janus Films and the Criterion Collection is slowly making the rounds to various theaters throughout the country and will eventually become, after further technical tweaking, a Criterion DVD.

Tweaking was essential for a re-release because, like all of this director’s movies (except Kane), Chimes suffered from budgetary constraints ($800,000 to bring off a medieval epic with a spectacular battle scene!) and post-production snafus, resulting in a soundtrack that chipped off pieces of dialogue—no minor flaw when the dialogue is Shakespeare’s. But thanks to the restoration, we are reminded that Welles, often criticized for being self-indulgent and undisciplined, was a remarkably tenacious artist.

For it had to be sheer, hard-won discipline that drove Welles to seek the core of a ten-act theatrical narrative that is bustling, multifarious, and occasionally in need of historical footnotes. Back in 1939, Welles staged for his own Mercury Theater in New York a two-night amalgamation of four plays (Richard II and Henry V, as well as both Henry IVs) called Five Kings, but he apparently lacked a unifying vision. The result was a notoriously money-losing and critic-bemusing mess. In 1960, he produced another stage version in Dublin, and gave it the title that would later serve as the film’s. By then, he knew he wanted to deal with only the two Henry IV plays and to concentrate on the relationship between Falstaff and Prince Hal. This production was also a flop at the box office, but Welles had caught hold of the theme that would give his film its focus.

That theme might be formulated as a question: “Who is your true father?” Prince Hal, a Machiavellian playboy, goes about ruining his own reputation by consorting with a pack of rogues led by the epic scoundrel Sir John Falstaff. After lowering expectations as far as possible, he will astonish everyone when he finally reforms. That’s the plan, at least. As in so many of Shakespeare’s plays, however, an initially simple set-up releases a host of complications. When exactly will Hal reform—only after his father’s death and his own coronation? Won’t that be too late for a young king to win the respect of his people? Meanwhile, doesn’t he worry that all the roguery and drunkenness will have seeped into his bones?

But the most important complication has to do with Hal’s loyalties. The raffishly charismatic Falstaff has become a kind of father figure to the prince, usurping the stern and care-beset King Henry IV. Welles underscores the contrast between these two figures with his casting. As the King, John Gielgud is—as Pauline Kael wrote—“a skeleton too dignified for any flesh to cling to it, inhabited by a voice so modulated it is an exquisite spiritual whine.” How different from Falstaff, played by Welles himself. By the 1960s, Welles had swollen into the glorious mound of flesh required for the part. Unlike Gielgud, who we usually see in profile, Welles appears full-face. His superb cameraman, Edmond Richard, captures his suety massiveness in a way that recalls the sardonic jollity and lurking sadness of the satyrs in Roman frescoes. Hal (nimbly played by Keith Baxter) must finally choose between the frosty nobility of his real father and Falstaff’s dissolute vitality: he cannot be loyal to both. This turns the historical chronicle into something approaching tragedy.

Welles adds an additional layer of ambiguity to the Hal-Falstaff relationship with the unique way he films two key scenes. In the text of the Henry IV, Part 1, and in most productions of the play, the prince, alone on stage, announces his scheme to the audience in a monologue, “I know you all, and will awhile uphold / The unyoked humour of your idleness.” But in the film, Welles has Hal speak these lines in Falstaff’s presence. Hal’s back is turned to the fat knight, but he does not lower his voice: he knows Falstaff is hearing him, and Falstaff knows that Hal knows. So the prince is actually warning Sir John about what awaits him. But the sadly smiling, fatalistic expression on Welles’s face tells us that the warning goes for naught. These two are somehow bound together, no matter what fate holds in store for them.

Then there is the battlefield scene where Falstaff cheats Hal out of a moment of glory by claiming to the king that it was he, not Hal, who killed the doughty rebel Hotspur in battle. In the text, Hal shrugs this off: “For my part, if a lie may do thee grace / I’ll gild it with the happiest terms I have.” But the film makes it clear with a series of close-ups of Gielgud, Baxter, and Welles, that the king, perhaps believing Falstaff, continues to be disappointed by his son, and that Hal, hoping to redeem his reputation with his courage in battle, can’t forgive his drinking buddy. Why doesn’t Falstaff understand this? By my reading of the moment, he actually does understand his mistake but can’t stop himself from trusting that the prince will forgive him. Thus, Chimes at Midnight is, among other things, a drama of self-deception.

Chimes, it should be noted, has flaws that not even this digital restoration could correct. The elocution of Gielgud and Baxter is beyond reproach, but Welles—perhaps because he felt so at home in the skin of Sir John—often tosses off his lines so casually as to make them unintelligible. And there is still a problem with sound levels. To quote Kael again: “We hear the voices as if the speakers were close, but on the screen the figures may be a half mile away or turned from us at some angle that doesn’t jibe with the voice. In the middle of a sentence an actor may walk away from us while the voice goes on.” That, alas, holds true even in the restored version. And Welles, being Welles, can’t help inflating certain scenes with sheer rambunctiousness. Thus, some simple carousing at the Boar’s Head Tavern turns into a folk-dance festival, and Hotspur’s touching, funny leave-taking of his wife gets sliced up by a veritable concert of bugle-blowing. Worse, Welles almost spoils the magnificent scene—one of Shakespeare’s greatest—in which the dying king reproaches and then forgives his son. He inexplicably cuts away from it to give us a glimpse of what Falstaff and Justice Shallow are up to. (Fortunately, when he returns us to the palace, Gielgud’s powerful acting quickly reasserts command.)

But in what other production will you see a Battle of Shrewsbury so jaggedly brutal that it makes you forget to breathe? Or a Doll Tearsheet played by Jeanne Moreau not as the usual bawdy wench but as a bedraggled, affectionate alley cat? Or the final rejection of Falstaff by the newly crowned Henry V (“I know thee not, old man. Fall to thy prayers. / How ill white hairs become a fool and jester!”) spoken with such stifled tenderness and shaky hauteur? This is Shakespeare refracted through the sensibility of Orson Welles, and who else in the theater world of the past century possessed such Elizabethan variety, force, and richness?