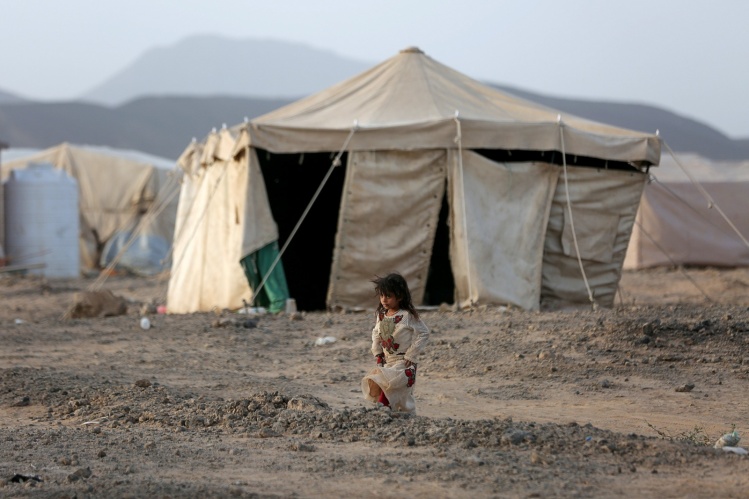 A girl in Marib, Yemen, walks past a tent at a camp for internally displaced people, April 5, 2021 (CNS photo/Ali Owidha, Reuters).

On April 2, a small ray of hope emerged from Yemen: a sixty-day ceasefire brokered by the United Nations, beginning on the first day of Ramadan. It is the first real ceasefire in the six-year war between Yemen’s coalition government and Houthi rebels, which has become a proxy conflict between Saudi Arabia and Iran. Since the ceasefire took effect, Yemen has been allowed to receive much-needed fuel shipments, and there have been some flights to and from Sana’a’s airport, but the Saudi blockade of Yemen’s ports continues. The peace remains fragile and limited.

Nearly four hundred thousand Yemenis have died in the conflict, 60 percent of them from hunger, illness, or unsafe drinking water, and many have been unable to access basic necessities because of the Saudi blockade. More than 23 million people, amounting to three-quarters of the country’s population, are in need of aid. Meanwhile, the price of grain is climbing because of Russia’s invasion of Ukraine.

Too many Americans remain unaware of our own country’s role in creating this humanitarian catastrophe. The United States supplies a significant amount of the aircraft Saudi Arabia uses in Yemen. Over a year ago, President Joe Biden vowed to reduce American involvement in the war, announcing that the United States would end “offensive operations” in Yemen and halt “relevant” arms sales to Saudi Arabia. At the time, observers were skeptical. Saudi Arabia claims it has acted entirely defensively in Yemen, so the United States has continued providing military aid and intelligence to the Saudis without violating Biden’s vague promise.

The House of Saud does not appear comfortable with Biden administration officials, preferring the uncritical solicitude of the Trump family.
sharetweet

Nevertheless, there has been a notable strain in U.S.-Saudi relations. The House of Saud does not appear comfortable with Biden administration officials, preferring the uncritical solicitude of the Trump family. Donald Trump was eager to provide Saudi Arabia with weapons for its war in Yemen, and used the U.S. military to attack Riyadh’s enemies, like Iranian General Qasem Soleimani. Biden, by contrast, has expressed openness to reducing American aid for Saudi Arabia, and supports restoring the so-called Iran nuclear deal. After Russia invaded Ukraine, the Saudis turned down U.S. requests to increase crude-oil production to lower gasoline prices for Americans. The Saudi government will not even condemn the invasion.

In mid-April, the Intercept reported that Congressional Democrats drafted a letter to Secretary of State Antony Blinken encouraging the Biden administration to “rebalance” its relationship with Saudi Arabia. “A recalibration of the U.S.-Saudi partnership is long overdue in order to reflect President Biden’s important commitment to uphold human rights and democratic values in our foreign policy,” the letter reads, citing the war in Yemen, the murder of Washington Post journalist Jamal Khashoggi, and Saudi Arabia’s refusal to increase crude-oil production as reasons to distance ourselves from the regime.

It is long past time for the United States to stop protecting the Saudi regime and enabling its atrocities in Yemen. But that is not enough. As we rush relief to Ukrainians fleeing violence, we should also remember those suffering the effects of war in other parts of the world, and acknowledge our own responsibility for some of that suffering. The richest country in the world has a moral duty to make sure that children do not starve in Yemen and Afghanistan because the West is preoccupied with events in Eastern Europe. As the war in Ukraine worsened, the World Food Programme pleaded with donor countries: “Don’t make us take food from children that are hungry to give to children that are starving.”

Published in the May 2022 issue:
View Contents
Tags
War and Peace
Middle East