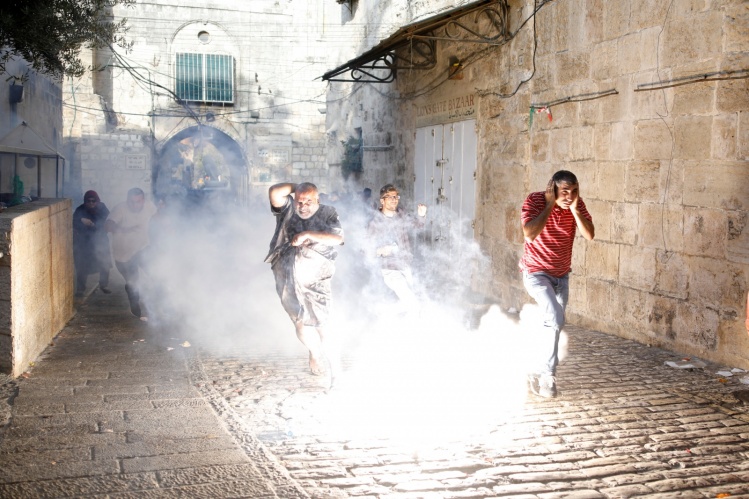 “I don’t know anymore who is right and who is wrong.” I was talking with a Palestinian man from Jerusalem, about a confrontation between Palestinian Muslim protesters and Israeli police taking place less than a mile away. The man was in his forties and Armenian Orthodox. He was the owner of a high-end antique store. He seemed naturally impish, but the violence had exasperated him, and he didn’t want to talk politics. He offered me a cigarette, and showed me a funny picture on his phone. I pointed out that his shop sells gold and silver menoras. He tensed up. “Jewish is human, Arab is human, we are human, we wear the same shoes.”

His comment expressed the frustration of many Christians in Jerusalem. This past summer they once again found themselves caught between camps in a religiously charged standoff in the Holy City. It began on Friday, July 14, with a shooting on the Holy Esplanade (or Temple Mount), which is sacred to Jews as the historical site of the First and Second Temple, and to Muslims as the site of Al Aqsa Mosque and the Dome of the Rock. Three Israeli-Arab gunmen ascended the Esplanade looking to kill Israeli police: two policemen died, two were injured.

But the crisis that followed was less the result of the shooting itself than of the Israeli reaction to it, which provoked organized Palestinian resistance. Following the shootings, Israeli forces closed the Esplanade until Sunday, and raided Al Aqsa, where the shooters were alleged to have stored weapons. The following day Israeli police installed metal detectors outside two entrances to the Esplanade. Palestinians saw this as an affront to Islamic sovereignty over the Esplanade. Since the Six Day War in 1967, when Israel took over the Old City of Jerusalem, Muslims have continued to control the Esplanade through the Jordanian Islamic Waqf—a religious trust that has overseen the site for over a century. The metal detectors had been installed without consultation with the Waqf.

For almost two weeks, Muslims refused to pass through the metal detectors to enter Al Aqsa for daily prayers. Instead, outside the entrances to the Esplanade, hundreds of Muslims congregated to pray twice a day in a series of protest liturgies that often descended into clashes with police.

Neither local Christians nor Christian pilgrims from abroad could ignore these events. Lion’s Gate, one of the entrances to the Esplanade, opens onto a road in the Old City that local Christians know as Via Dolorosa—the path Christ took to his Crucifixion on Golgotha. The protests occurred a few yards from the First Station of the Cross (now inside an Islamic school), the Franciscan Monastery of the Flagellation, the Church of the Condemnation, and several other important Christian sites. Lion’s Gate is also used by Christians leaving the Old City to go to the Mount of Olives, the Garden of Gethsemane, and the Chapel of the Ascension.

By the end of what came to be called the “Temple Mount Crisis,” fifteen people had died. Among the dead were Palestinians mortally wounded during protests and three members of a Jewish family murdered in the West Bank by a young Palestinian who claimed to answer “the call of Al Aqsa.” More than a hundred people were injured, most of them Palestinians. The standoff finally ended when the Israeli government removed the metal detectors on July 25.

You may stay in the Christian Quarter and believe the conflict is elsewhere. But ultimately, you can’t ignore it
sharetweet

During the crisis, I was in Jerusalem, spending a month as a volunteer with a Franciscan organization. On the morning of the shootings, I made my regular commute from the pilgrim hostel on St. Francis Street in the Christian Quarter of the Old City toward New Gate—the discreet little stone archway that was opened in 1889 during the Ottoman period to give Christians easy access to their holy places. It is not uncommon to see this gate crowded, or to see police standing guard—but on this particular day, armed police were preventing anyone from passing through the gate, into or out of the Old City.

I ran into a friend, an Old City Christian, who told me about the shootings. Several people around us were watching a video of the incident on their smartphones. I found myself in the middle of an eclectic crowd, all waiting for the police to let up: a cluster of Haredi teenagers in their typical dark long coats squatting behind a parked car; an Arab Muslim, trying to negotiate passage with the policemen who refused to budge; a group of Modern Orthodox Jews standing farther back; a Coptic priest, walking behind a Franciscan friar; three Brazilian acquaintances, who work for a Catholic news agency. The swift foot traffic of the Christian Quarter had been plugged up by barricades blocking access to the Old City. The varied life of the City had whirlpooled into one place. The scene by New Gate demonstrates an obvious truth: the Israeli-Palestinian conflict touches everyone in the Holy Land. You may stay in the Christian Quarter and believe the conflict is elsewhere. But ultimately, you can’t ignore it; the barricades will remind you.

The Christians of the Old City, who live in the Christian and Armenian Quarter and pass through New Gate every day, are somehow both marginal and central to the Israeli-Palestinian conflict. Christians have lived in Jerusalem for two thousand years. When Latin Catholics arrived with the Crusades in the eleventh century, they encountered Eastern apostolic churches whose presence in Jerusalem stretched back to the earliest days of Christianity.

Today, however, it’s easy to overlook Jerusalem’s Christians. This is partly because there aren’t many left. Seventy years ago they made up 20 percent of the city’s population; today they make up just 2 percent. Fewer than six thousand Catholic and Orthodox Christians now live in the Christian Quarter of the Old City, while about five hundred Armenian Orthodox live in the Armenian Quarter. Compare this with the more than three thousand Jews and the thirty thousand Muslims inhabiting the Old City.

Despite their shrinking numbers, the Christians of the Old City bear a rich commercial and religious culture. Among the terraced streets of the Christian Quarter one can find religious-goods stores, fine antique dealers, and kiosks hawking funny t-shirts, silk shawls, fruit pressers, photographs from the British Mandate period, and political posters of every persuasion. There is a dry cleaner, an optician, a gym (Champion’s), a tattoo parlor with roots in the Crusader period (Razzouk), and a grocer that sells alcohol behind the counter. Scattered among these stores stand monasteries, churches, Christian schools, and pilgrim hostels.

Yet life in this busy Christian neighborhood is constantly shadowed by the Jerusalem’s Israeli-Palestinian conflict. Even when that conflict is in temporary abeyance, professional opportunities are scarce, and many Christians have emigrated. Many of the dwellings in the Christian Quarter are dilapidated because the locals can’t afford to maintain them. Most Jerusalemite Christians are Palestinian, and remain largely supportive of Palestinian independence and against the Israeli occupation. But unlike the Palestinian population living beyond the security wall in the occupied West Bank, all of Jerusalem’s Christians can apply for Israeli citizenship, and many do—mostly out of economic necessity.

Many of Jerusalem’s Christians are worried about the Islamization of the Palestinian movement, particularly with the rise of Hamas. Some note the relatively greater respect for religious liberty in Israel than in many other countries in the region: Jerusalem’s Christians can attend church openly. As residents of Jerusalem—with or without Israeli citizenship—they enjoy free access to the Christian holy places, like the Holy Sepulcher. (Christians living on the other side of the security wall, such as those in Bethlehem, do not enjoy such freedom of movement; they need a special permit to visit the holy places in the Old City.) Arab Christians are vulnerable not only politically but also physically. In recent years there has been an uptick in acts of arson and desecration against churches. A church in a town near Jerusalem was recently vandalized by Jewish extremists.

During the crisis, even after the barricades came down, many foreigners avoided the Old City. The U.S. Consulate forbade its employees from entering the area for several weeks and counseled American tourists to stay away. For the Arab Christians who live there, that wasn’t an option. During the crisis, residents of the Old City who work in other parts of Jerusalem would have had trouble returning home. And unlike foreigners, they were often asked, by police, for proof of residency before being allowed to re-enter the City. Business owners had to keep their establishments shuttered for the first few days of the crisis. School trips into the Christian Quarter were canceled.

People are bored of talking about the crisis. Things don’t get better.
sharetweet

As the standoff continued, leaders of the various Christian communities in the Holy Land publicly expressed their concern. The Franciscan Custos of the Holy Land, Francesco Patton, and the Apostolic Administrator of the Latin Patriarchate of Jerusalem, Pierbattista Pizzaballa, both signed statements urging peace. Catholic Patriarch Emeritus Michel Sabbah was turned away at Lion’s Gate on July 27 while trying to join a Palestinian protest, and sent a message of solidarity to the protestors. His message was echoed by Archbishop Theodosios Atallah Hanna of Sebastia from the Greek Orthodox Patriarchate of Jerusalem, who headed a Christian delegation to Al Aqsa. One local Christian named Nidal Aboud became famous when news outlets published a photograph of him reading the Bible alongside Muslims during noontime prayers outside Lion’s Gate. Old City vendors, Christians included, organized a one-day strike in solidarity with the protests.

Most locals I spoke with took sides. One young man, a successful antique dealer, told me, “What is happening with the metal detectors is, for us, as if somebody stepped on a statue of the Virgin Mary.” Another Old City resident, who runs a community center in another part of Jerusalem, insisted on the following point: “Christians and Muslims are on the same boat. Our movement is restricted.”

But many ordinary Christians in the Old City seemed resigned. One man confessed: “People are bored of talking about [the crisis]. Things don’t get better.” A middle-aged shop owner I saw the day after the shooting sounded equally deflated. About the clashes, he echoed the words of Christ: “They don’t know what they do. They fight—the Muslims and Jews—but they don’t like us. We are different…. Nothing will change until Jesus returns.”