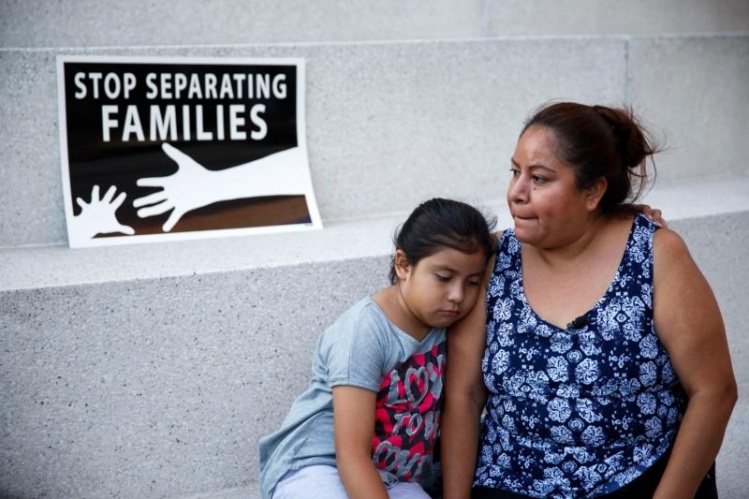 On November 11, 2016—just three days after the seismic U.S. election—Bishop Eusebio Elizondo, auxiliary bishop of Seattle and chairman of the USCCB’s Committee on Migration, released a statement to President-elect Donald Trump. After congratulating him on his victory and offering prayers for him and his administration, Elizondo addressed migrants themselves:

I offer a special word to migrant and refugee families living in the United States: be assured of our solidarity and continued accompaniment as you work for a better life.

The rest of the letter articulated the bishops’ stance on immigration and immigrants—reminding readers of the U.S. church’s advocacy for refugees and migrants, tying this advocacy directly to “our identity as Catholics,” and appealing to all American Catholics to remain “a nation of hospitality.” The letter was read on the first day of the USCCB’s Fall General Assembly and drew the support of the body of bishops.

Over the past few weeks, that support has been tested as President Trump has issued three executive orders aimed at cracking down on migrants and restricting immigration. The first promised construction of a wall on the U.S.-Mexico border; the second cut off federal funding for sanctuary cities; the third suspended the refugee program and denied entry to Muslim immigrants from seven countries. Bishop Joe S. Vasquez of Austin, Texas, chair of the USCCB’s Committee on Migration, issued sharp responses to all three orders, and many other Catholic leaders, including Chicago Cardinal Blase J. Cupich, decried the administration’s actions.

This pro-immigrant stance, as popular as it is on the left, is not shared by everyone in the U.S. Catholic Church. It has drawn criticism from various voices in the Catholic public sphere. And indeed, Trump’s plans to build a border wall, deport undocumented immigrants, create registries of the foreign-born, and enact a ban on Muslim immigrants didn’t actually cost him the U.S. Catholic vote; 52 percent of Catholics voted for him (although while he won 60 percent of white Catholics, he won only 26 percent of Hispanic Catholics).

Despite these divides among the Catholic laity, the USCCB and the bishops are following a century-old precedent. Indeed, since the early 1900s, the U.S. Catholic bishops have consistently spoken out on behalf of immigrants. This was especially true during the 1920s and ’30s, a period of xenophobic passion during which the United States enacted unprecedented immigration restrictions.

By the end of World War I, the U.S. public, long susceptible to nativist outbursts, had firmly turned against immigration. Heightened feelings of nationalism, widely held views on eugenics and the undesirability of non-whites, and the conviction that certain immigrants were “unassimilable” prompted the United States to move away from liberal immigration policies and toward more comprehensive restrictions. Society could only be improved, according to the pundits and policymakers of the time, by drastically reducing the number of immigrants, especially from “undesirable” (in other words, non-Anglo-Saxon) parts of the world.

After World War I, Congress enacted a succession of restrictions targeting immigrants from most of the rest of the world: Southern and Eastern Europe, and all of Asia and Africa. At first, the legislation focused more generally on poor immigrants: the 1917 Immigration Act, for example, attempted to limit the number of poor and uneducated migrants by establishing a literacy requirement and a head tax on all migrants entering the United States.

This was not enough to stop the mass migration of Southern and Eastern Europeans, however, and so a few years later Congress enacted the Emergency Quota Act of 1921. This sharply reduced all immigration from Europe and European colonies by establishing numerical limits on the number of immigrants from specific countries. The Johnson-Reed Act of 1924, which set an annual limit of 150,000 European immigrants, was even more explicit in its prohibitions based on nationality. It established stricter quotas than those imposed in 1921, and prohibited immigration from Asia and the Arab world. Once the law took full effect, the number of immigrants from Southern and Eastern Europe declined even more precipitously.

Despite the new laws, Mexican immigration to the United States actually rose throughout the 1920s. Mexican migrants, like all others from the Western hemisphere, had been exempt from the quota laws of 1921 and 1924, thanks to aggressive lobbying from agricultural interests. After the onset of the Great Depression, however, economic pain combined with pre-existing nativist fervor and Mexicans were increasingly targeted for deportation in the early 1930s.

The U.S. Catholic Church would become one of the most important advocates for immigrants during this period. Well before restrictive immigration laws were passed, the church had been responding to the needs of immigrants. There was a clear reason for this: since the 1850s, the majority of the laborers and families arriving in the United States were Catholic—and they often arrived in desperate need of welfare, assistance, and ministry. The church met those needs at the ground level, from parish associations to national organizations such as the Extension Society (founded in 1905) and the National Council of Catholic Charities (founded in 1910).

In 1920, the body of bishops became more directly involved, when the National Catholic Welfare Conference—a predecessor organization to the USCCB—founded the NCWC Immigration Bureau. With the heft of the hierarchy behind it, the organization was able to go beyond the efforts of other charitable and welfare groups. Indeed, much of the work of the Immigration Bureau focused on legal and political advocacy for immigrants.

The national office, located in Washington, D.C., often undertook negotiations among various government departments, foreign embassies and consulates, and other national welfare groups; sent legal representatives before the secretary of labor’s Board of Review to advocate in individual cases; applied to the State Department on behalf of immigrants; and filed applications for re-entry permits, non-quota visas, and preference visas with the Department of Labor. Officials within the Immigration Bureau also strongly and publically criticized legislation that they saw as overly restrictive and punitive. According to historian Todd Scribner, the bulk of the episcopate and even the pope came out in opposition to the literacy test, and sent written protests to Congress on the passage of the 1921 and 1924 bills.

This unanimity would not always hold—by 1952, the NCWC was tentatively supportive of the McCarran-Walter Act, which reinforced the national origins laws, on the grounds that any reform was better than none. And from the 1920s to the 1950s—just as today—the Catholic laity was more divided in its views than the episcopate, with some prominent lay Catholics and members of the Catholic press speaking and writing publically in support of immigration restriction. Furthermore, Catholic opposition to immigration restriction during the 1920s and ’30s also opened the church to criticism in a period when anti-Catholicism (including, in its worst form, the KKK) was resurgent.

Nevertheless, the consistent advocacy of the NCWC is evident in archives of the American Catholic History Center at the Catholic University of America, which contain the organization’s monthly publication, Catholic Action. (Before 1932, it was titled the NCWC Bulletin; for simplicity’s sake I will refer to it here as Catholic Action.)

As these publications reveal, the bureau was not only concerned with critiquing immigration legislation, but also involved in the actual hands-on work of assisting and ministering to immigrants—work undertaken in local offices established in key immigrant-receiving locales, including New York, Philadelphia, San Francisco, and El Paso. Employees helped immigrants prepare affidavits or other legal papers and forwarded information to the Washington office so that legal staff could submit appeals, among many other efforts. The bureau also launched a port assistance program that met incoming ships, helped immigrants through the immigration process, and provided loans.

In offering such assistance, the bureau also encouraged immigrants to remain within the church—an especially important task as Protestant evangelizers aimed at winning converts among the new arrivals. In addition, the bureau placed utmost importance on protecting and re-uniting immigrant families. As an editorial in the January 1930 Catholic Action stated, “[T]he nation itself was built upon a foundation of immigrant families… [and] the spiritual well-being of the immigrant family determines to a very large degree its quality.”

Perhaps even more important than the material and spiritual assistance the U.S. Catholic bishops provided was their voice. In the face of growing nativism and restrictionism after the 1920s, they continued to advocate publically for sensible immigration reform. A 1953 statement in Catholic Action effectively characterized the attitude of the bureau towards immigrants and immigration legislation in the preceding decades:

We believe in an affirmative Immigration Policy for America—one which will welcome, without racial, national, religious or other discriminations, those who seek to immigrate and become part of our national life; one which will provide the ever new life-blood which America needs and by which, throughout its history, it had been enriched; one which will assure to new immigrants the basic rights guaranteed to its citizens and will welcome permanent residents into citizenship; one which will express America’s active concern to cooperate with other nations in providing a fair share of resettlement opportunities, in the U.S.A., as well as in other countries, for those oppressed for freedom’s sake.

These ideas survive, echoed in Elizondo’s statement of November 2016 and in the responses of the USCCB’s Committee on Migration to President Trump. The question now is whether they will continue to be reaffirmed by the entire episcopate, and by the Catholic laity. Many American Catholics have ancestors who were the beneficiaries of the Immigration Bureau’s advocacy. In the dawn of the Trump era, will they support the bishops who speak out on behalf of those seeking refuge on our shores?