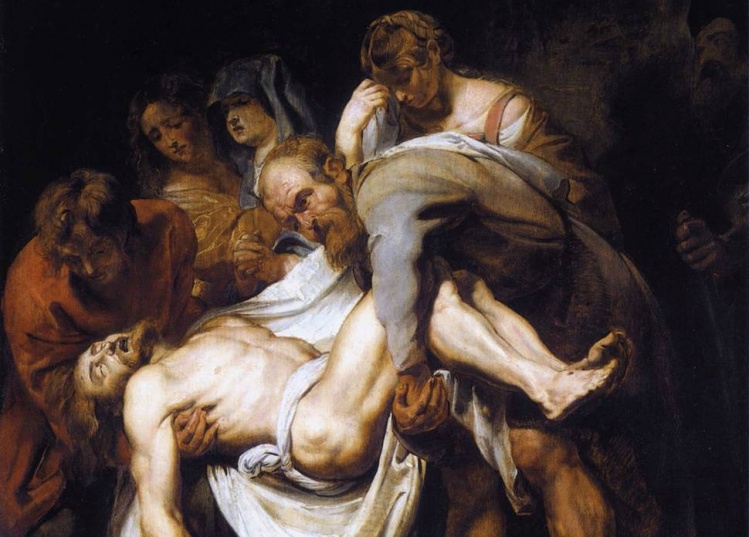 It’s an old saw among art historians that once Renaissance artists learned enough about anatomy and perspective to paint beautiful bodies, religious subjects became excuses to show off humanistic skills with little or no theological depth. Thus, Fra Angelico, the saintly Dominican, was a “true” religious painter, whereas Michelangelo and those who came after him were masters of a renewed Classical celebration of the flesh without much interest in the spirit. The trouble with old saws is that they are rusty, dull, and don’t cut. For one thing, Michelangelo and the great Venetian Tintoretto were known to have been profoundly devout. It is impossible to look at their work with care, attention, and familiarity with Christian tradition and the Bible and not see the interpretive richness of their religious art. The same is true of Titian and the notoriously rowdy Caravaggio, whose The Adoration of the Shepherds, The Calling of St. Matthew, and The Entombment of Christ should be enough to gain him entrance to the Kingdom, if not canonization.

Peter Paul Rubens (1577–1640) has long presented a particular challenge to classification. He was a pious and well-educated Catholic. Many of his paintings are of religious subjects. Yet they are so bright and cheerful, so crowded with buxom women and muscular men caught in swirls of light and color, that his work, even his religious paintings, must be considered baroque (in the dismissive sense of the term)—decorative, theatrical, busy, pagan, and only superficially Christian. But, in the arts, as in life, simplistic classification gets in the way of actually paying attention. How refreshing it is, then, to read this scholarly, accessible, and beautifully illustrated book by the German art historian Willibald Sauerländer. The author describes himself as a descendent of Protestant sacristans and agnostics, but he has a deep knowledge and understanding of Catholic theology, tradition, and culture, and of the historical circumstances of the Lowlands in the early decades of the seventeenth century. “The altarpieces with which Rubens…decorated the churches of the southern Low Countries,” he writes, “must be seen against the historical background of the Wars of Religion, iconoclasm, and the Calvinist, Protestant rejection of images of saints and the Virgin Mary.”

According to Sauerländer, calling Rubens a master of “baroque passions” is not altogether wrong unless—as too often is the case—it becomes an excuse for ignoring his expression of religious and ethical sentiments and ideals. “It is only a slight exaggeration to say that art history has appropriated Rubens as one of its greatest figures by wresting his art free from the church”—that is, from theology, liturgy, history, and his own faith. Sauerländer’s project is to put the seventeenth-century church back into the picture by giving particular attention to Rubens’s paintings of subjects—the Eucharist, saints, and martyrs—that were criticized by Reformers and intentionally reemphasized by the church. (Veneration of Mary is another important example, though most of Rubens’s paintings of the Virgin are outside the compass of this study.)

One of the book’s most insightful and touching chapters addresses Rubens’s great altarpiece The Deposition in the Cathedral of Our Lady in Antwerp. When opened, as it would be during the celebration of Mass, the altarpiece is a triptych, with Christ’s Descent from the Cross in the center, the Visitation (with Mary wearing a fetching hat) on the left wing, and the Presentation in the Temple on the right. When the piece is closed, the left panel depicts a Herculean St. Christopher carrying the infant Jesus on his back, and a hermit with a lantern appears on the right panel. Rather than dismissing the seemingly random choice of ancillary subjects as expressions of Rubens’s creative fancy, Sauerländer looks into the archival material on the commissioning of the painting and into the theology of the Real Presence. Christopher was the patron saint favored by the local Civic Guard, wealthy laymen who contributed to the payment of the artist. They wanted their saint to be prominent in the picture. However, the cathedral chapter composed of bishop and clergy, following the directives of the Council of Trent, insisted that central pictures over main altars focus on Jesus, not on local saints.

The magnificent result, according to Sauerländer, is a compromise worked out between Rubens and his patrons. Taking the symbolism of Christopher as “Christ-bearer” to heart, Rubens painted a rugged Christopher impossible to miss when the panels are closed during the week; with side panels open, the viewer sees on the left the pregnant Mary visiting her cousin Elizabeth and, on the right, Mary presenting Jesus to Simeon, who holds the infant in his arms. The large central panel is a powerful depiction of Jesus being lifted down from the cross by Joseph of Arimathea, Nicodemus, the beloved disciple John, and Mary Magdalene, with his mother standing by and seemingly directing the entire process. Altogether the altarpiece is a tribute to all those—like Christopher—who “carry Christ” and make him present to others. It is beautiful to behold, and a carefully reflective lesson on the Eucharist, Mary, and the Communion of Saints. Baroque and Catholic.

Sauerländer’s chapters on saints include learned and insightful discussions of paintings of St. Francis as a Flemish peasant kneeling on the ground in a patched habit and a very different portrayal of Ignatius of Loyola standing on the steps before an altar in his “shining gold chasuble.” In his portrait of Ignatius, painted for the Jesuits in 1620 to promote their founder’s canonization (which occurred two years later), Rubens includes a row of Jesuit brothers standing next to Ignatius and crowds of the poor and sick writhing below. According to Sauerländer, the painter’s challenge was to depict Ignatius as priest, founder, preacher, and miracle-worker all in one, resulting in one of his most “intelligent,” if not most emotionally satisfying, works.

In Rubens’s image of Lawrence about to be stretched on the grill, the author sees the influence of Michelangelo’s statue The Dying Slave, now in the Louvre. Like other Baroque painters, Rubens frequently imitated and adapted classical works—including the famous Greek statue of Laocoön and His Sons—and classical ideas—especially stoicism—in his art, but as Sauerländer argues and demonstrates, Rubens’s religious paintings bring these influences together with the wishes of his patrons, his own knowledge of theology, and his faith in their Christian coherence. Regarding a disturbing yet beautiful painting of the martyrdom of St. Stephen, the author observes, “The liturgical and theological message of this highly emotional depiction of a martyrdom is contained in the oratio of the Mass on St. Stephen’s Day: ‘We beseech Thee, Lord, let us imitate what we celebrate, so that we learn to love even our enemies; for we are celebrating the birthday of him who was able to entreat our Lord Jesus Christ even for his persecutors.’” Rubens would have known and understood this. Brilliant, Baroque, and Catholic, his paintings shed more than one kind of light on his sacred subjects.

Robert Kiely is Professor Emeritus of English at Harvard University.