Catholic Republicans are Implicated in the Rise of Donald Trump 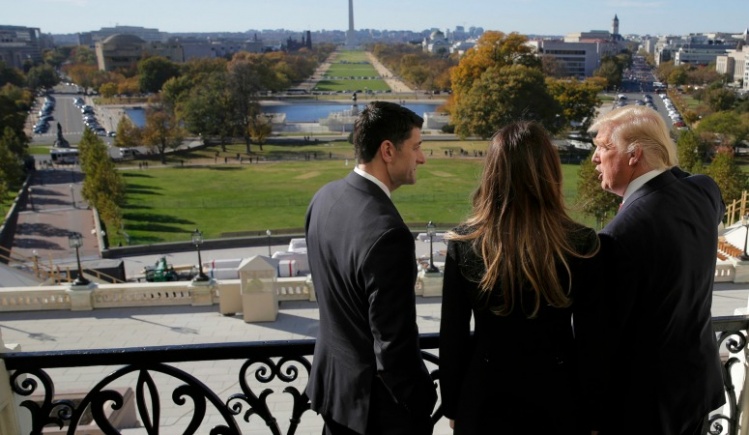 Writing in National Review Online, the leading bastions of American Catholic Republicans—led appropriately by Robbie George and George Weigel—lay out an urgent appeal to their fellow Catholics to oppose Donald Trump. The problem is, these Catholic Republicans are directly implicated in Trump’s meteoric rise. They actively supported the economic policies that fed the beast of insecurity, and they actively undermined the values embedded in the Catholic social tradition that might have acted as a bulwark against this narcissistic blowhard.

It is galling to see Weigel and George proclaim that the Republican party has been promoting causes at the center of Catholic social concern in the United States. I ask myself, in what alternative reality are they living?

This is a party itching to cast millions into the abyss of having no health insurance, proud of its cavalier attitude to human life.

This is a party promising to actively undermine the Paris climate change agreement, the most important international agreement since the Second World War, and endorsed by 196 countries—and a key priority of Pope Francis.

This is a party strongly committed to the upward redistribution of income, promising to slash both taxes on the wealthy and the most basic social protections for the poor—and a party that bows low before the “deified market” condemned by Pope Francis.

This is a party that has spent decades seeking to undermine and destroy the ability of labor to organize, a direct attack on both solidarity and subsidiarity—and a party that prizes corporate profitability above the need for a living wage.

This is a party that seeks to rip asunder basic consumer protections, and to go back to a financial wild west at a time when large financial institutions are larger, more interconnected, and more self-absorbed than ever.

This is a party of war, of bellicosity, of torture—a party that prizes machismo posturing over reasoned dialogue, or—God forbid—peace building.

This is a party that appeals to the worst instincts in human beings, seeking to demonize the other, deport the other, bomb the other—and a party that brazenly pours fuel on the flames of America’s tragic racial legacy.

This is a party that presents a distorted vision of Christianity, one in which God bestows wealth on his favored, and where his favor covers the United States more than any other country.

It is simply not possible to argue that this party embodies the principles of Catholic social teaching. These issues are all—to coin a phrase—non-negotiable. Ask yourself: would Pope Francis feel comfortable with the values and positions of this party? Would he even recognize the severely distorted vision of Catholicism put forward by Robbie George and George Weigel?

It’s not only that these Catholic Republicans offer the most crimped list of issues possible, issues that seem to align conveniently with the priorities of the evangelical right. It’s that even with these issues, their party falls flat.

What protection for the unborn does the GOP really hope to provide? All I can see on offer is a judicial bait-and-switch—putting forward judges that are supposed to protect the unborn, but end up protecting the financial interests of large corporations instead. And of course, the party’s favored social and economic policies will likely increase the incidence of abortion. The party cynically exploits the unborn to cloak positions that do egregious harm to the common good.

Religious liberty? Oh yes, Republicans are loud when it comes to championing the rights of wealthy business owners on this front, but quieter when it comes to the assaults on Muslims or restrictions on the ability of churches to aid immigrants (and in many cases actively supporting these attacks and impediments). And of course, they still stand by a ruinous war and occupation that led to the utter destruction of the ancient Christian Church in Iraq.  And George Weigel in particular is implicated in that war.

And whatever do they mean by rebuilding a “marriage culture”? That train had left the station long before same-sex marriage arrived on the scene. I don’t recall Republicans having much of a problem with the rampant culture of divorce and serial monogamy. Yes, Donald Trump is a libertine with three wives, but Rush Limbaugh—one of the party’s ideological standard bearers—is a libertine with four wives. And Newt Gingrich, an archetypal establishment figure, managed to rack up three wives. Where was the hand wringing over this very heterosexual assault on the marriage culture? And where were they when increasing economic insecurity was actively undermining the institution of marriage among the working class?

Of all their claims, the most outrageous is that the Republican party embodies “constitutional and limited government”, which they claim is in accord with subsidiarity. This is egregious on numerous fronts. First, it seeks to grant American constitutional documents quasi-magisterial status in a way that is quasi-blasphemous. Second, it utterly misrepresents subsidiarity, which calls for decisions to be taken at the lowest level possible and the highest level necessary, for higher-order associations to aid and support lower-order associations, and which can never be divorced from solidarity. There is simply no mandate in Catholic social teaching for what they deem “limited government”. But this is what happens when you conflate the gospel of Jesus Christ with the gospel of John Locke.

The bottom line is this: George Weigel and many on his pals on this list have been actively undermining authentic and traditional Catholic social teaching for decades now. This implicates them in the rise of Trump in a number of ways.

It is clear that Trump’s supporters are motivated primarily by massive inequality, anxiety, and economic insecurity. As has been documented for a long time now, real median wages have been stagnant for well over 40 years—and the lower the education level, the worse it gets. The economic expansion over that period has not trickled down, not even remotely. Inequality returned to levels last seen during the Gilded Age. This didn’t come out of a vacuum. It is directly related to the economic policies treated as an article of faith by Republicans since the Reagan era. (The Democrats don’t have a stellar record here either. They have spent the past few decades favoring Planned Parenthood, Wall Street, and the “creative class” over their traditional constituency.)

Here’s the problem: As economic opportunity unravels, so does trust, social cohesion, and a sense of shared purpose. This is fertile territory for the rise of someone like Trump—a man who speaks to genuine insecurity, but who is also adept at plowing through the fraying social capital and preying on the all-too-human tendency to scapegoat and demonize others in times of strife.

But where have the Catholic Republicans been when the building blocks of Trump’s ascendency were painstakingly stacked into place over the past three decades? They were either supporting the policies that brought us to this point, or else turning a blind eye to them. Their ideological blindness led to a major inconsistency. They never really understood that subsidiarity applied as much to the private sector as to public bodies. They ignored the dangers from rising corporate power in an atmosphere of decaying civic purpose. They were never really able to draw the obvious connection between the libertarian roots of the economic policies they endorse and the libertarian roots of the social policies they despise. (One could argue, of course, that the Democrats face the same blindness with the positions reversed.)

Delving even deeper, the Catholic Republicans never really understood the deep reach of the acquisitive culture that rose to such prominence in the 1980s. And while they opine about the degradation of the culture, they never managed to connect the dots from the sexual revolution in the 1960s to the “greed is good” egoism of the 1980s to the fetishization of celebrity narcissism today—all the way down to the man who embodies the worst libertine instincts of all periods. They failed to note that when Donald Trump bragged about his “greed”, he was merely reflecting the prevailing culture of the past few decades—so much so that it seemed so run-of-the-mill and uncontroversial. They never really understood the profound connection between the mainstreaming of hyper-acquisitive Wall Street values and the mainstreaming of a hyper-sexualized pornography culture.

On top of all this, the Catholic Republicans were motivated by ideology to hold their peace in the face of the increasing moral ugliness displayed by their party—the increasingly vitriolic substance-free discourse, the ever-louder racial dog whistles, the ever-more-brazen attempts at voter suppression, the all-out attempts to utterly delegitimize the first African-American president, the mainstreaming of torture and demonization of the other, the brazen lies and distortions spread not only by Fox News and talk radio but also by leading politicians like Sarah Palin designed to whip up fear and hatred.

Trump didn’t come out of nowhere. The path was paved for him by economic and cultural developments over the past few decades. But his rise was greatly facilitated by this more recent degeneration of the Republican party. He is merely the logical endpoint of its current trajectory.

And yet the Catholic Republicans never seemed overly concerned about any of this before. So why are they so concerned now? Policy wise, Trump is not really any worse than Cruz or Rubio. Despite the vices he embodies, he might actually be better. Why? Because Cruz and Rubio are true believers, beholden to the radical and dangerous ideology that has brought us to this point. Their bellicosity runs deeper, as does their antipathy to the most basic social programs (and, incredibly, even to preventing people dying on streets). They are beholden to the most unvirtuous business interests, from vulture funds to climate change deniers. Their answer to the anxiety of the working class is slogans about freedom and cuts in the capital gains tax!

But do George Weigel and Robbie George care about this? No they do not. I think Paul Krugman is right about this: “the establishment’s problem with Mr. Trump isn’t the con he brings; it’s the cons he disrupts”. And that holds for the Catholic Republican establishment too. They built this monster. They own him.