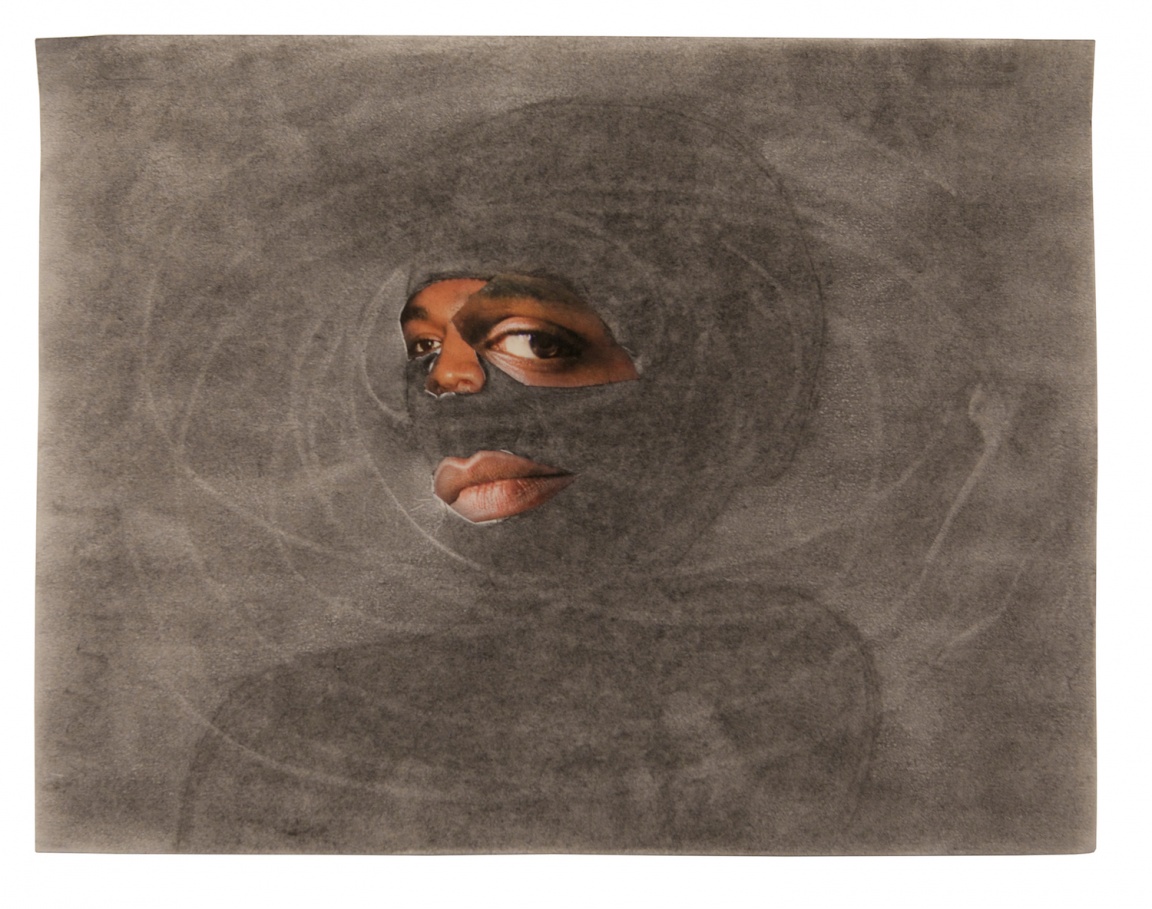 The year 2012 was a turning point for Gilberto Rivera. Born in Puerto Rico and raised in Brooklyn, the former graffiti artist had been incarcerated in the U.S. federal prison system for nearly two decades. He had been regularly subjected to “diesel therapy,” in which prison authorities bus detainees to different facilities across the country to break their ability to form close relationships. Rivera had always sought to make the most of things, learning new artistic techniques from incarcerated mentors wherever he ended up: impressionism at the Lompoc federal prison in California, oil painting at Leavenworth, Kansas, and ceramics at Allenwood, Pennsylvania. But after an altercation with a guard at Fairton, New Jersey, he’d had enough. Rivera was outraged, and needed a new form capable of expressing it.

An Institutional Nightmare was the result. Resembling a rugged, otherworldly landscape viewed from above, the three-dimensional mixed-media collage is made of Rivera’s torn prison uniform, a drop cloth, prison commissary reports, newspaper, acrylic paint, and floor wax. Rivera’s anger seems to well up out of it: the uniform, a drab brown vortex stiffened with wax and paste, writhes around the pale yellow cloth, its cheap synthetic insulation spilling over into a frothy sea of blue and red. He could have been punished just for making it, as prison rules prohibit the appropriation and destruction of state property. Yet Rivera felt it was a chance worth taking, not only as a way of asserting his identity as an artist, but also of critiquing the system of mass incarceration in the United States, which currently ensnares more than 2.3 million people.

Rivera is just one of more than thirty-five artists featured in Marking Time: Art in the Age of Mass Incarceration, a revelatory new group show on view at MoMA PS1 in New York through April 4. The massive assemblage of drawings, paintings, prints, sculptures, video installations, collage, and photography is the result of more than a decade of research by guest curator Nicole R. Fleetwood, a professor of American studies and art history at Rutgers. She’s also the author of an accompanying scholarly book, the most comprehensive survey of contemporary art made by incarcerated people to date. An unabashed prison abolitionist and advocate for incarcerated people, Fleetwood has witnessed firsthand the injustice and violence of the U.S. prison system, especially the generational trauma it inflicts on communities of color (and on members of her own family). As a result, the show is anything but a facile, feel-good celebration of art as moral redemption or imaginary transcendence. Instead, it’s didactic in the best sense of the term. It teaches visitors—most of whom have never been to a jail and do not know a single incarcerated person—how to see the cruelty the prison system tries to hide, and how to think expansively about a world in which prisons no longer exist.

Marking Time begins and ends with one of the most accessible genres of prison art, portraiture. As Fleetwood reminds us, the technique has a long tradition (as well as a prestigious pedigree) in Western aesthetics. Incarcerated in his late teens, George Morton used his nine years in federal prison to study the techniques of the Old Masters, eventually earning a coveted spot at the Florence Academy of Art and winning its prize for “best portrait of the year” in 2016. Mars, an arresting charcoal drawing of a young Black woman rendered with photographic precision, is easily the most technically accomplished work in the show. 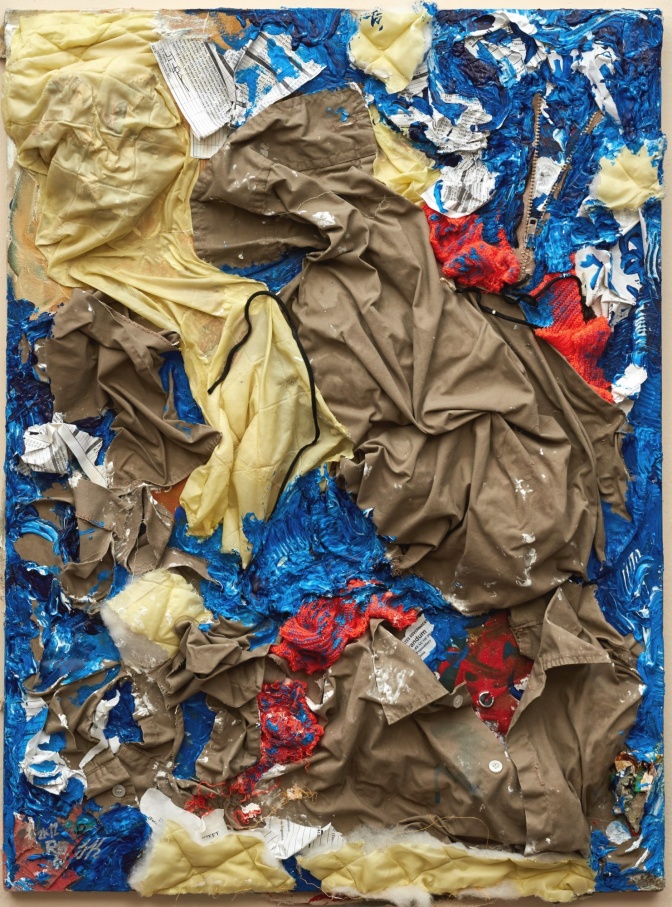 Morton once said that learning to draw in prison lent a “monastic quality” to his time there. That feature is equally palpable in the late San Francisco painter and activist Ronnie Goodman’s 2008 San Quentin Arts in Corrections Arts Studio. In this carefully composed self-portrait, modeled on Antonello da Messina’s St. Jerome in His Study (1475), Goodman shows himself in profile, quietly examining a large print, surrounded by more than a dozen of his paintings as soft light pours in from a window above. The stillness of the scene, and Goodman’s subtle treatment of the handful of signs of his incarceration (a clock sits just below an observation window at the top left of the frame), casts artmaking as a peaceful respite and meaningful escape from the harsh monotony of prison life.

But it’s a mistake, Fleetwood argues, to interpret art made in prison through the lens of Western aesthetics to which we’ve become unconsciously accustomed. We tend to think of the archetypical artist as a “free, mobile, white, Western male,” a genius with ample access to materials, space, and time for artmaking. Because such conditions by definition cannot hold in prison, Fleetwood argues that we need to employ a new framework for understanding prison art—one she terms “carceral aesthetics.” By widening our analysis to include information about the restrictive material, spatial, and temporal conditions under which prison art is created, we don’t just gain a better, fuller understanding of particular works. We can begin to appreciate art’s power to subvert, maybe even tear down, the system of mass incarceration itself.

A first step in that process is recognizing one of the most glaring ironies of the prison system: though it justifies its existence by appealing to the protection of the common good and the maintenance of social order, it operates in a way that is actively hostile to the formation of fellowship within prison walls. Across several galleries, Marking Time highlights the way artists have come together to resist this anti-human logic by forming artists’ collectives. One of the strongest and most innovative grew out of the partnership Rivera formed at Fairton with Jared Owens and Jesse Krimes. Besides critiquing each other’s work and pooling their resources to procure art supplies, they also maintained a common library of art books, complete with subscriptions to leading arts publications.

We can begin to appreciate art’s power to subvert, maybe even tear down, the system of mass incarceration itself.
sharetweet

The results are astounding. Krimes, the group’s leader (now the owner of a flourishing studio in Philadelphia, started after his release in 2013) had just finished a degree in art before his arrest. Works like Purgatory and Apokaluptein:16389067—a monumental, thirty-nine-panel Boschian landscape stamped onto bed sheets using newspapers, magazines, and hair gel—reveal Krimes’s mastery of drawing, collage, and printmaking, as well as the poetry of Dante and the philosophy of Giorgio Agamben. Owens, interested in color theory, abstract expressionism, and the historic linkages between slavery and the prison system in the United States, channels all three in the triptych Ellapsium: master & Helm (2016), in which the architectural plan of Fairton is overlaid with a classic 1840s abolitionist image of a slave ship making the Middle Passage. The color scheme is significant: Owens fills most of the frames with orange (the color of prison jumpsuits), which is in turn capped by a small amount of blue (the color most associated with policing in America). The prison-ship structure, a symbolic site of death, is rendered in black, gray, and white. 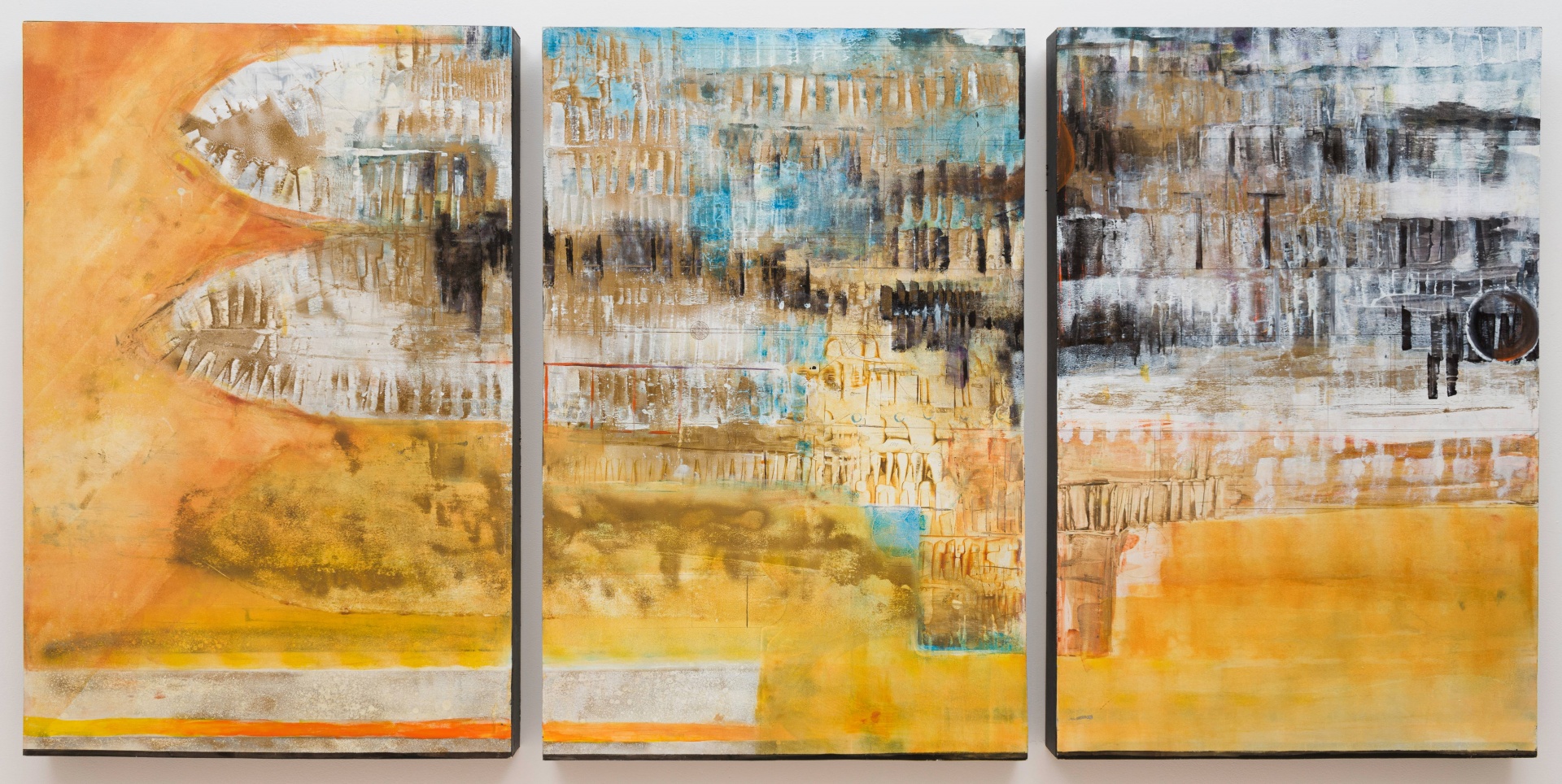 Owens’s imagery is not just some dark fantasy. The Vernon C. Bain Center, a hulking jail barge housing nearly a thousand inmates offshore at Hunts Point in the Bronx, floats just a few miles upriver from MoMA PS1, across from Rikers Island in New York’s East River. Rikers, of course, is the city’s notorious, sprawling jail complex, scheduled to close by 2026. That promise has done nothing to alleviate the plight of inmates now trapped in its overcrowded confines, brutalized by  guards and fellow inmates and at a disproportionately high risk of contracting COVID-19. Marking Time responds with a twin-channel video installation by Ashley Hunt, Ashes, Ashes (2020), which meditates on Rikers’s brutal past and ponders its future. Haunting images of the island’s wintry shoreline are overlaid with audio from activists and former inmates, who wonder why a wealthy city like New York spends so much on policing and prisons when the money could be used for public goods like health care, education, and housing.

That’s the pernicious thing about U.S. prisons: mass incarceration relies on a sleight-of-hand, because the public thinks of carceral facilities as protection against (and a remedy for) crimes committed by individuals, rather than a system that targets (and profits from) poor communities of color. Prisons create perverse geographies, corrupting everything they touch; no one who comes into contact with the system, Fleetwood argues, remains unscathed. One of the most compelling chapters in her book explains her unease with prison arts programs and the (usually white) nonprofits that run them. They’re in some sense complicit, inasmuch as they rely on the prison authorities for access, protection, and space to do their work.

Photojournalists and activists aren’t exempt, either, though they may well produce stirring works that draw much-needed attention to ongoing injustices. Marking Time displays stunning black-and-white gelatin prints of Angola State Penitentiary by Louisiana photographic team Chandra McCormick and Keith Calhoun, as well as intimate, richly colored portraits of female inmates serving life sentences by Canadian public-defender-turned-documentarian Sara Bennett. But unlike their subjects, McCormick, Calhoun, and Bennett still get to return home at the end of their sessions. Uncomfortable as it may be, Fleetwood has a point: the photos are powerful, even revelatory, but you can practically feel the lens separating the artists from the detainees.

That’s not the case with one final group of images on view in Marking Time. Vernacular photography—posed shots taken by amateur prison photographers against painted backdrops, often during family visits, as a way of memorializing the day—are perhaps the most widespread form of prison art in the United States, with millions of them circulating each year. Fleetwood explains that most eventually wind up in private collections, usually scrapbooks and shoeboxes. She had always displayed them throughout her home (her cousin was incarcerated in Ohio) but never thought of them as art until after she began her book project.

The photos reveal a rarely seen side of prison life: inmates relaxed and smiling, hugging their loved ones and expressing themselves freely. Fleetwood suggests that such images are so popular because of their “haptic” quality. Printed on thick photo paper with short messages scribbled on the reverse, they serve incarcerated people and their relatives as tactile records of a brief moment of communion, an instant when they were able to forget about the walls designed to keep them apart. On my second visit to the show, after reading Fleetwood’s book, I found myself drawn to these images more than any others. “Amateur” in the etymological sense, they offer tangible evidence of the loving relationships and hidden sacrifices that sustain those living in such grim conditions—and point to a day when all prisoners will go free.