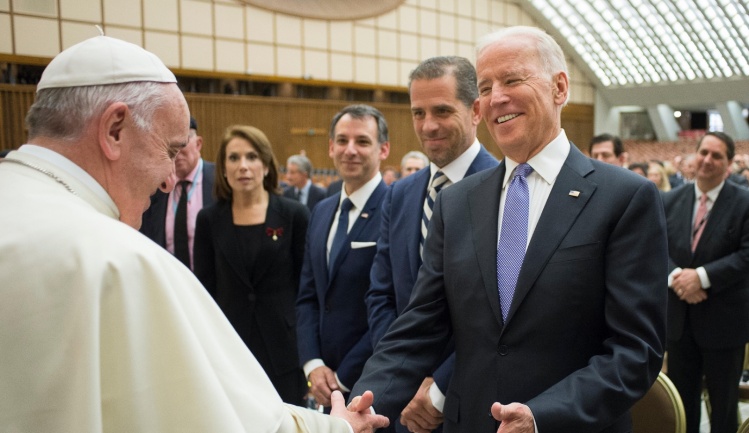 With the Democratic Party’s nomination of Joe Biden as its presidential candidate, some members of our Church have decided to make his Catholic faith an issue in the electoral campaign. This is quite a switch. In 1960, when John F. Kennedy ran for president as the Democratic candidate, it was prominent Protestant ministers like Norman Vincent Peale and Billy Graham who made an electoral issue out of Kennedy’s faith—not his fellow Catholics, most of whom were proud to have a co-religionist nominated for president after years of anti-Catholic prejudice.

But in 2020, some of Joe Biden’s fellow Catholics are instead using his faith against him, apparently as a vote-getting tactic for his opponent. They are publicly disparaging Biden as somehow unworthy of full membership in our Church. They claim that he is not a very good Catholic and that he may not receive Holy Communion at Mass, presumably because of the “pro-choice” political views of the Democratic Party.

Since these are Catholics dealing with the faith of another Catholic, the Church’s law governs their actions, and that law has a few things to say about this issue. Canon 220 of the 1983 Code of Canon Law says, “No one is permitted to harm illegitimately the good reputation which a person possesses nor to injure the right of any person to protect his or her own privacy.” Under canon law, every Catholic is guaranteed a right to their good name in the Church and a right to their privacy.

The condition of a fellow Catholic’s soul is a purely personal matter, not one for public debate. The injunction of Canon 220 would seem, in itself, to forbid Catholics from engaging in a public discussion of the tenor of Biden’s Catholicism and his ability to receive the Eucharist. These are private matters, not political ones.

Canon 220 is not the only canon law that affects the claims that Biden’s Catholic critics make against him. Canon 205 says that to be a good Catholic, in full communion with the Church, one must be baptized and joined to the Church by sharing the same faith, the same sacraments, and the same ecclesiastical governance. There is absolutely nothing in the public record to indicate that Biden is not baptized or that he does not accept the Church’s teachings, its sacraments, and its ecclesiastical governance. As he himself has said numerous times, his Catholic faith is part of his DNA. But, Biden’s Catholic detractors claim, he does not accept the Church’s teachings on the immorality of abortion. Check the public record. Biden has never said that, not once; and it is standard Catholic moral theology that there is a difference between the morality of an act and the morality of a law that allows an act.

Another problem with Biden’s Catholic political opponents publicly declaring that he is not a good Catholic is that this is not their judgment to make. Jurisdiction in our Church is territorial. Under Canon 107, §1, a Catholic gets their proper pastor and bishop by virtue of where they live. If someone is to opine authoritatively on Biden’s status under Canon 205, these pastors are the only ones authorized by canon law to do so, and in Biden’s case, they have not. (Of course, the pope, who has universal jurisdiction under Canon 331, could do so as well, but he has not spoken on this subject either.)

Then there is the assertion that Biden is not eligible to receive the Eucharist at Mass. This line of reasoning is based on an interpretation of Canon 915 of the 1983 Code of Canon Law, which says, “Those who have been excommunicated or interdicted after the imposition or declaration of the penalty and others obstinately persevering in manifest grave sin are not to be admitted to Holy Communion.”  Here, Biden’s critics are relying on the second clause, about those who obstinately persevere in manifest grave sin not being admitted to Communion.

The condition of a fellow Catholic’s soul is a purely personal matter, not one for public debate.
sharetweet

Since Christ’s faithful have a right to receive the sacraments (Canon 213) and since the Church’s ministers cannot deny the sacraments to those who properly seek them (Canon 843, §1) and since Canon 915 is restrictive of these rights of the faithful, it must be given the most narrow reading possible (Canon 18). Note that there are four requirements in that second clause of Canon 915: (1) obstinately (2) perseveres (3) in manifest (4) grave sin. Giving these requirements the narrowest reading possible, what do those words mean?

“Obstinately” means not yielding to reason. It implies that the person making the negative judgment has tried to educate or convince the obstinate person. “Perseverance” means to pursue something persistently, without stopping. “Manifest” gets its meaning from the preceding canon to Canon 915 in the 1917 Code of Canon Law, Canon 855, which denied Communion to those who were “publicly unworthy.” The reliable Abbo-Hannan commentary on this canon gives, as examples of manifest sinners, such persons as prostitutes, usurers, persons living in concubinage, and blasphemers—people whose way of life is openly sinful. “Grave sin” is, of course, mortal sin. Historically, this canon was applied to Catholics who were divorced and remarried outside the Church. Under Canon 915, they could not be admitted to Communion because they were living a life of concubinage. Canon 915’s possible application to Catholic politicians who fail to publicly support the Church’s teaching only dates to 2004.

What impresses most about the Canon 915 checklist is that it is not the sort of judgment that is easily made, least of all by a priest looking down the aisle to see who is coming up to Communion. As a matter of fact, unless the priest has had a chance to talk to the communicant beforehand, it is hard to see how the “obstinate” requirement can be met. And remember, Canon 915 is restrictive of rights, so it does not get a broad interpretation; it gets the narrowest possible interpretation. This is just one of the problems with the application of Canon 915 to Catholic politicians. Another is that unless abortion rights are the only, or the most important, thing that a Catholic politician campaigns for (to the point where the politician becomes completely, publicly identified with that cause), it is difficult to see how the persistently and openly sinful requirements of Canon 915 are met.

Then there is the very serious question about the application of Canon 915 after Pope Francis’s post-synodal apostolic exhortation, Amoris laetitia, in 2016. This papal document states in Note 336 that personal discernment can recognize that no grave fault exists “with regard to sacramental discipline.” It’s a reference to Canon 915 and its prohibition of divorced and remarried Catholics being admitted to Communion. This meaning was taken up by both the German and Argentinian bishops’ conferences in their responses to Amoris laetitia. The German bishops said that “For the question of the reception of the sacraments, the bishops do not see in Amoris Laetitia a general rule or an automatism, but rather they are convinced that discerned solutions which do justice to the individual case are required.” The Argentinian bishops said that “it is equally possible to undertake a journey of discernment.... Amoris Laetitia opens up the possibility of access to the sacraments.” In his answer to the Argentinian bishops, Pope Francis said their response “explains precisely the meaning of...Amoris Laetitia. There are no other interpretations.” That makes the Argentinian bishops’ response a part of the papal magisterium on Canon 915.

What effect does this have on the application of Canon 915 in general? Recall that, for most of its history, this canon was thought to prevent Catholics who were divorced and remarried outside the Church from receiving Communion. But now, after Amoris laetitia, a divorced and remarried Catholic’s ability to approach the Eucharist is based on the individual’s personal discernment of the state of their soul—a discernment guided by pastoral care, to be sure, but nonetheless their personal discernment. This same interpretation of Canon 915 would apply to Catholic politicians because, in the eyes of their Catholic critics, this is the canon that prevents them from receiving Communion. After Amoris laetitia, and assuming for argument’s sake that Canon 915 is even applicable to Catholic politicians to begin with, their ability to receive Communion must also be based on their individual personal discernment, their own prudential judgment, guided by pastoral care. This Franciscan reading of Canon 915 leaves no role for the Communion police; as Pope Francis himself says in Amoris laetitia, No. 37, “We have been called to form consciences, not to replace them.”

In February of this year, the pro-choice president of Argentina, Alberto Fernández, visited the Vatican. In a Mass at St. Peter’s celebrated by Bishop Marcelo Sánchez Sorondo, an Argentinian bishop who is chancellor of the Pontifical Academy of Social Sciences, President Fernández was given Communion. Canonists have always relied on the praxis of the Roman Curia for the proper interpretation of law. If Canon 915 had the meaning that Joe Biden’s Catholic critics would give it, this is certainly proof of a contrary practice by the Roman Curia. Perhaps it simply reflects the changes in Canon 915 made by Amoris laetitia in 2016. Or perhaps it reflects long-standing curial practice. John Paul II gave Communion in 2001 to Francesco Rutelli, who was Rome’s avowedly pro-choice mayor. He also gave Communion in 2003 to Tony Blair, the pro-choice prime minister of Great Britain, who at the time was not even Catholic, although he did convert in 2007.

Our theology and our canon law should not be used as political weapons.
sharetweet

While using Canon 915 to deny Communion to Catholic politicians is extremely dubious, for all of the reasons mentioned above, what is not doubtful is the application of Canon 220. And this action by the distant priest or bishop implicates another canon. Canon 1389, §2, says that “A person who through culpable negligence illegitimately places or omits an act of ecclesiastical power, ministry, or function with harm to another is to be punished with a just penalty.” If the distant priest or bishop, in denying Communion to the traveling politician, does not take all of the steps necessary to determine whether Canon 915, as it is currently understood in our Church after Amoris laetitia, actually applies, the person in violation of the Church’s law may not be the politician. It may be that priest or bishop.

Catholics owe it to those who share our faith not to let our Church become a partisan political battleground. Our theology and our canon law should not be used as political weapons. The law is there to serve the theology, and the theology is there to get us to Heaven. Neither has any other valid use.