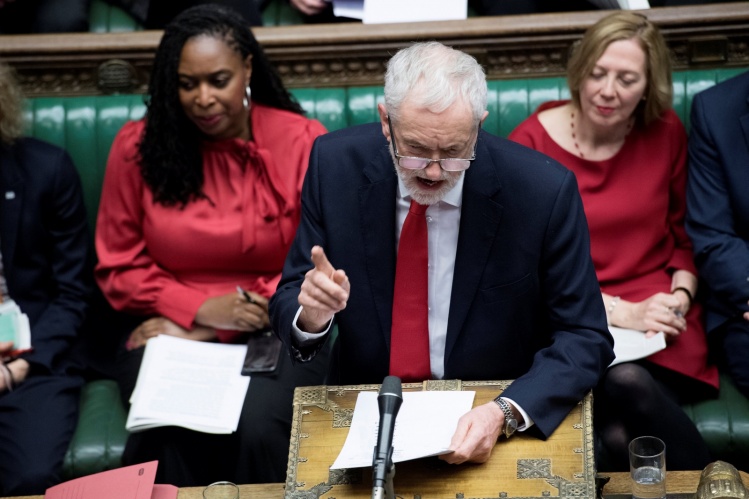 The New York Times described it as tantamount to ‘the laws of physics’ being “suspended.” Ministers resigned in protest. The British government, Conservatives declared, had done a deal with one who had “never once in his political life put British interests first.” To the uninitiated observer, it might appear that some awful, awesome abdication of power had occurred—as if the United Kingdom had decided to ask North Korea to have the casting vote on Brexit policy. The reality was rather more mundane. Having continually failed to get her deal passed by Parliament, Theresa May last Wednesday proposed a series of cross-party talks with the Labour Party and Jeremy Corbyn. She sought to secure a further extension and possibly devise a new deal that, with cross-party backing, might have more success, and avoid a catastrophic ‘No-Deal’ Brexit. It seemed like a sensible policy. But not everyone agreed. Boris Johnson tweeted that such talks would hand over “British trade policy and key law making powers…to Brussels,” Caroline Johnson proposed that a no-deal Brexit would be preferable, and arch-Conservative Jacob Rees-Mogg lambasted Corbyn as a “known Marxist” and warned solemnly that “history doesn’t bode well” for such talks. But despite the fact that Rees-Mogg is frequently presented as a by-gone product of the twentieth, if not the twelfth, century, his sense of history is lacking. He is completely forgetting that less than a hundred years ago the sitting British government, in the face of a terrible national crisis, decided to put aside party differences and work with the opposition for the good of the nation. And it actually worked rather well.

Jacob Rees-Mogg and his Conservative allies would do well to tone down their dudgeon.
sharetweet

The year was 1929. Angered by the Conservatives’ heavy-handed response to the 1926 General Strike and the intractable issue of unemployment, the British public rejected Conservative Stanley Baldwin in the 1929 General Election, and elected a minority Labour government, with bold plans for housing and public works. However, the impact of the Wall Street Crash, barely three months later, precipitated massive economic hardship that crippled Britain’s already struggling staple industries. In 1931, a £120 million deficit was predicted (equivalent to nearly $10.5 billion today) and the fledgling Labour government faced a stark choice—slash unemployment benefits or face economic ruin. The Labour cabinet met in August 1931, and a majority voted against the cuts, arguing that they were incompatible with Labour’s most fundamental values. Prime Minister Ramsay MacDonald, himself in favour of cuts, went to the King and tendered his resignation. But George V wouldn’t accept it, and instead invited MacDonald to form a radical new cross-party government that would consist of Labour, Conservative, and Liberal politicians, all working together for the common good.

The National Government, as it became known, dominated the 1931 election and would last for another ten years. And while it didn’t solve Britain’s issues overnight, in light of the punishing international economic and political situation, its achievements were profoundly impressive. A prudent economic policy, combined with a forward-thinking move away from the restrictive Gold Standard and a shrewd foreign policy ultimately led to some remarkable results. Unemployment was reduced by nearly 1 million from 2.6 million in 1931 to 1.6 million in 1939, and by 1937 industrial output was actually higher than in pre-crash 1929. British rearmament played a part in this revival, but the National Government deserves credit for keeping the British economy afloat, especially during the crucial early 1930s. Nor was this the only area of the National Government’s success. Political extremism was consistently rebuffed, with both the Communist Party of Great Britain and Oswald Mosely’s fascists firmly limited in prominence, even while countries such as Germany and Spain were racked by political strife.

So MPs such as Jacob Rees-Mogg really need to brush up on Our Island Story. While the outcome of Brexit is far from certain, the looming spectre of a No-Deal Brexit presents us with a massive potential crisis, which threatens colossal political and economic ramifications if we don’t make the right decisions. The Conservatives, like Labour in 1929, are a minority party racked with internal disputes and partisanship. But the situation today, as in 1929, calls for a calm, measured, and balanced response— an understanding that our problems won’t be solved overnight and a repudiation of political extremism on both sides. So Jacob Rees-Mogg and his Conservative allies would do well to tone down their dudgeon. Reports from preliminary meetings have called the cross-party Brexit talks “constructive.” It is still too early, of course, to say what that actually means. And it would be a long stretch indeed to compare either May or Corbyn to Baldwin or MacDonald. But cross-party efforts have saved Britain before. With any luck, they could do it again.