A Visit to a Memorial, Mendicant Monks, and a Car Ride
By Paul J. Griffiths
Spirituality
Foreign Affairs
Secularism and Modernity 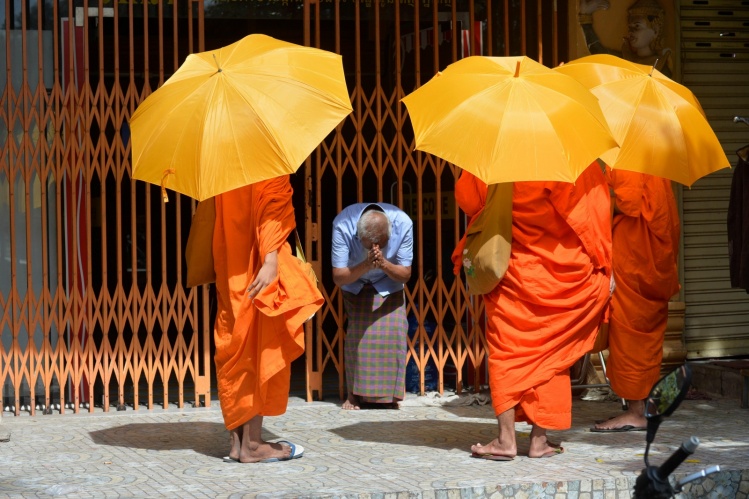 On March 12 I spend most of the day at Tuol Sleng, also known as S-21, in Phnom Penh. This is the principal place where the Khmer Rouge interrogated and tortured its enemies in the late 1970s. Perhaps fifteen thousand people passed through here in a little over three years; fewer than a dozen survived. S-21 was once a school; then it was a torture chamber; now it’s a memorial to the agony inflicted by the Khmer Rouge, and a reminder of the ease with which we kill one another.

The buildings are of stained and cracked concrete, solemnly adorned now with photographs of the dead, instruments of torture, remnants of crudely constructed cramped cells, iron bedsteads to which prisoners were shackled while being tortured, munitions boxes in which human waste was stored (these affected me especially: the shit of those about to die as replacement for the bullets used to kill them), and much else. Prisoners were brought in, shackled, and incarcerated with as many as sixty others in a single room where they might be kept for weeks or months, hosed down every now and then, and kept alive on five hundred or so calories a day. They were waiting their turn for individual interrogation and torture, and when the time came for that it was done with the usual attention to detail. Torture is a skill human beings have been honing for millennia, and we are, by now, good at it. The Khmer Rouge were low-tech in this, as in much else, but they were certainly attentive: an interrogator could himself (or herself—there were some female interrogators) be imprisoned and tortured if someone under his care should die too soon, and that prospect fostered care with the particulars of pain. Maximal pain short of death was the goal; there’s an art to that, and care was taken with it. Confessions of complicity with the enemy were what was wanted, and they were, of course, forthcoming.

The Khmer Rouge wanted to start everything over. For their ideologues, and especially for Pol Pot, Brother Number One, things had gone badly enough in Cambodia that cities, art, machines, and religion (they were indiscriminate here: Muslims, Christians, and Buddhists were equally bad) needed to be erased. They made graveyards of automobiles as well as of people; they razed cathedrals as well as factories; they restarted the calendar to Year Zero; and they tried to transform the “new people” (intellectuals, artists, monks, priests, those with soft hands or eyeglasses, those who wrote and read and painted and composed) into “old people” (workers in the fields) by turning them—the ones they didn’t directly kill—into forced labor. Between 1975 and 1979 perhaps one in five Cambodians died by one kind of violence or another. It’s as if something between sixty and seventy million Americans were killed in less than four years.

I wept at S-21. What else is there to do? I wept not only at what’s commemorated in that place, but also at the optimism with which it’s commemorated. At S-21, as at Yad Vashem, as at the Washington Holocaust Museum, and as (no doubt, though I haven’t seen them) at memorials to the Armenian slaughter and the Rwandan massacre, the commemoration is said to be undertaken so that this won’t happen again. But it will. It always has and it always will, to the end of the age, being in this like slavery. These slaughters are among the most characteristic human activities. Memorials cannot keep them from happening again; what they can do is prompt us to tears. That’s what we can give to those who were killed in these places, as well as to those who killed them. It’s enough.

Christianity, too, is a matter of gift-exchange: the Lord preveniently gives to us, and we return the gift exactly by accepting it with gratitude.
sharetweet

On most days while I am in Phnom Penh, I take coffee in the morning at a shop on Street 51, not far from my hotel. From there, I watch Buddhist monks making their morning rounds. Those I see are in groups of three or four. They’re mostly young, shaven-headed, saffron-robed, sandaled, carrying lovely orange shoulder bags. They stop at shops, cafés, and bars—indiscriminately, it seems—and beg. Mostly they get something. I usually can’t tell what: food, drink, cash, perhaps other things. That’s what the bags are for. When they do get something, they respond with a minute or two of chanting. The donor stands reverentially, hands before the face, palms together, while the chant lasts; and then there’s a parting with bows and smiles.

I watch this with delight. It’s an almost perfect example of gift-exchange: tangibles for intangibles, to mutual benefit. The donor amasses merit, the recipient gets food, and each blesses the other. I watch as a Christian, and delight in Jesus’ presence there—at the extent to which the monks’ smiles participate in his. Christianity, too, is a matter of gift-exchange: the Lord preveniently gives to us, and we return the gift exactly by accepting it with gratitude. We Christians can learn about gift-giving from the economy of donation that relates lay to monastic Buddhists, which is what I’m seeing on Street 51.

And there’s a further lesson for us in the fact that we can learn about it from those who don’t know Jesus. I mean the fact that Buddhists can teach us about the nature of the triune Lord’s relation to us. I’m blessed by what the monks are doing, even though they don’t know that I’m watching or thinking these thoughts. I’d like to walk across the street and stand with them, vibrating with their chants.

It’s hot: in the nineties by now. It’s dusty. The air is polluted, harsh on the back of my throat. But there’s a deeply social feel to things, even in this river of traffic.
sharetweet

On March 16 I make my way from downtown Phnom Penh to the airport, a matter of seven or eight miles. It’s been a fraught morning. I’ve been negotiating with a tailor for some shirts he’s making me, and everything’s taking much longer than seems possible. By 10:30 the deal is done, $120 changes hands (for six shirts; they’re good shirts), but I’m doubtful that I’ll make my flight, which is at 12:30. I hail a tuktuk, negotiate the price without a word of language in common with the driver, and set off. The trip takes close to an hour in intense traffic with frequent jams—endless motos, most with three or four people on them, imaginatively distributed; tuktuks galore; gleamingly gigantic Toyota Land Cruisers—the usual river of people and vehicles negotiating for space with equanimity in conditions that would give most American drivers (including this one) a heart attack. It’s hot: in the nineties by now. It’s dusty. The air is polluted, harsh on the back of my throat. But there’s a deeply social feel to things, even in this river of traffic. A small boy sandwiched between his parents on a moto driving six inches to my left smiles, gap-toothed, at me; when traffic jams, I get questions from other moto drivers, mostly uncomprehended (sometimes we’ve a few words of French in common). I’m tall; I’m evidently not local; I have packages; my driver gestures to me to keep my packages safe—he thinks they may be snatched, but everything seems to me much more good-humored than that. By now I’m sweating, but enjoying the ride. The question of whether I’ll make the flight recedes in importance. I’m thinking about how it is that pollution and noise and danger can combine felicitously in my head with a sense that, really, everything’s fine, that there’s nothing here but good will. I make the flight with ten minutes to spare, and settle in for the short hop to Taipei, followed by the long haul to the United States.

Twenty-two hours after taking off in Phnom Penh I land at Raleigh-Durham Airport in North Carolina, which is home. I live about twelve miles from the airport, and as I’m walking from the plane to the exit, I call an Uber on my phone. By the time I get to the pick-up point, it’s there for me. I get in, exchange two words with the driver, and lean back into the air-conditioning. It’s twenty degrees cooler in Durham today than it was in Phnom Penh yesterday, but the car is air-conditioned nonetheless. The driver’s not playing the radio, and we hiss silently out into another, quite different, stream of traffic, this one on I-40. I understand this way of traveling: every driver is cocooned by glass and steel, cooled by conditioned air, and moving at a steady seventy miles an hour or so. There’s no exchange: this is a river of monads, sufficient to themselves, deliberately protected from impingement by others. I’m dropped at my door fifteen minutes after getting in the car, not much more than a quarter of the time it took me to traverse less distance in Phnom Penh. I’m not sweating; there’s been no negotiation about the fare, and indeed no words about it—computers have calculated it and billed me without me or the driver doing anything; and there’s been no exchange of any kind en route.

I enter my house thinking about this loss of conviviality and gain in efficiency and wondering whether it’s possible to have both. It seems it isn’t. And, being by now deeply American, and before that English, I doubt that, really, I want the conviviality of that Cambodian tuktuk ride. I can love it abstractly, enjoy it when I know I don’t have to live with it, and even judge it in some ways better than what I’m used to. But want it? No, not really. I’m a private man; people are to be kept at a distance whenever possible. And that’s my loss.