A Call to Judgment 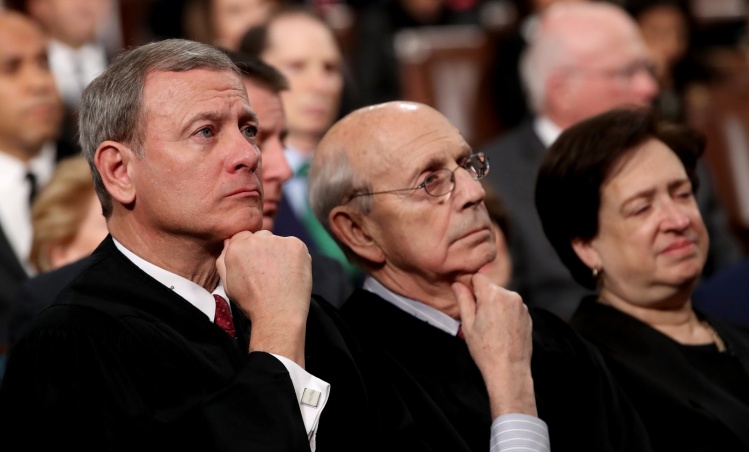 President Donald Trump has made it close to impossible to be above the fray. Judges, scientists, law-enforcement officials, journalists in mainstream news media, and academic historians are among those who traditionally see themselves as fair-minded arbiters or observers rather than partisan advocates. One after the other, we see these people—who would ordinarily be reluctant to speak out—enter the fray by assailing Trump for something he’s said or done. In doing this, they have to weigh the value of maintaining an appearance of impartiality against the call to conscience that Trump poses with his impulse toward autocracy.

Chief Justice John Roberts is the latest to calculate and take this risk with his decision to issue a statement affirming the independence of the federal judiciary following Trump’s repeated criticism of an “Obama judge” and the San Francisco–based Ninth U.S. Circuit Court of Appeals.

Trump has a talent for drawing his critics into the swamp muck with him. And while he wears the muck as a peacock wears feathers, it doesn’t look so good on someone like Justice Ginsburg.
sharetweet

Many others have felt compelled to make the same decision. Even Pope Francis, responding to a question about Trump’s push to build a wall between the United States and Mexico, essentially declared that was “not Christian.” Many commentators said it was a mistake for the pope to criticize a presidential candidate—pontiffs customarily strive to at least appear to be above the political fray, after all. And Trump seems to have drawn Francis into it; only a few days earlier, he declared that “the pope is a very political person” and that “I think Mexico got to him.”

Roberts’s colleague on the U.S. Supreme Court, Justice Ruth Bader Ginsburg, similarly crossed a line when she gave an interview to the New York Times during the 2016 presidential campaign in which she said, “I can’t imagine what the country would be—with Donald Trump as our president.” She was roundly criticized for that comment, including by the Times.

But the problem is that Ginsburg could imagine what the country would be like under Trump and decided she had to speak up. She had to have known that Trump would respond with the sort of invective he once employed in celebrity mud wrestling with ex-wives, Leona Helmsley, New York Mayor Ed Koch, Don Imus, Merv Griffin, gossip columnist Liz Smith, and many others.

Trump has a talent for drawing his critics into the swamp muck with him. And while he wears the muck as a peacock wears feathers, it doesn’t look so good on someone like Justice Ginsburg. Trump can roll in the slime and look the same. But even a little mud will stand out on the starched white shirts of people like Peter Strzok, James Comey, Rod Rosenstein, John O. Brennan, Michael Hayden, James Clapper, or Admiral William McRaven—those who, unlike Trump the New York real estate developer and TV celebrity, built careers that require a reputation for integrity.

Trump has tried to manipulate the criminal-justice system to his own benefit; pushed for the prosecution of his political rivals; pursued his false claim that the election system is rigged; sought to delegitimize the most responsible elements of the news media as an “enemy of the people”; marginalized government workers as a “deep state” enemy. Added to his claims against the judiciary, it amounts to a broad attack on whatever checks his power.

During the election campaign, I wrote in Commonweal that “something is being lost each time we see a Supreme Court judge, a respected historian or journalist find it necessary to cross the line into partisan advocacy.” Things look different now that, contrary to my expectation, Trump is president of the United States. He has used his power in alarming ways.