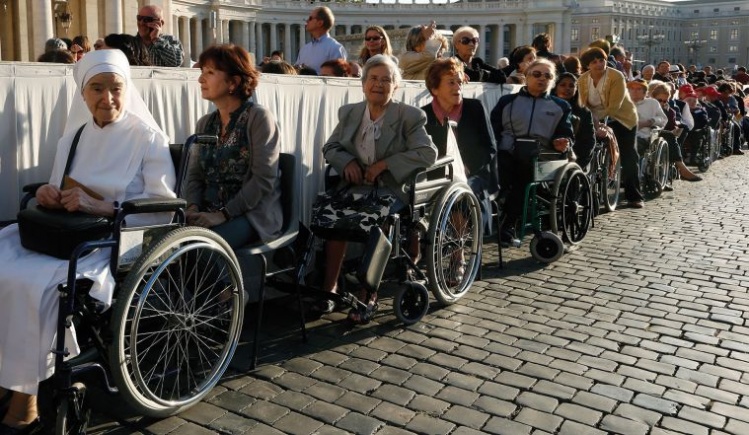 I spent a weekend in Vermont with three old college friends, an annual fall ritual. We’re in our mid-fifties, and talk centered on our children, who range in age from my nine-year-old to the twenty-five-year-old of one of my pals. We also talked about our parents. One of us has both still living; one lost both years ago; the other two have one parent remaining. All the surviving parents are facing major health challenges.

I drove back with the friend whose parents are still living, both in their early nineties and failing. He discussed the widely varying roles taken on by himself and his two siblings in assisting them, roles dictated by differences in resources, location, and willingness to help—especially with his mother, whom he described as “difficult.”

Our talk turned to our own planning for the future. For my friend, goal number one for his old age is to avoid saddling his children with responsibilities that might mar their ability to live their own lives. It troubles him to think that costly care in his or his wife’s later years could burn up the legacy they hoped to pass on to their children. “I’m going to spend the last ten years of my career earning as much as I can as a buffer against that,” he said. As for the possibility that they might one day care for him personally, that isn’t even on the table.

My friend is a political progressive who frequently laments capitalism’s creative destruction and its dissolving effect on traditional bonds of family and community. His family is tight-knit; he loves his own two children desperately and could hardly feel closer to them. Yet he can’t imagine his children ever caring for him. “I really can’t stand the thought of someday being a burden to them,” he said.

I sympathized; what middle-aged person, looking forward, doesn’t feel that? At the same time, the prospect of children taking in and caring for their ailing and elderly parents is one of those primordial arrangements that arise from—and complete—the life cycle, in the process constituting a foundation stone of human society. And yet it doesn’t happen much anymore, at least not in this country. U.S. census data show that only a little more than 1 percent of all households with children have a grandparent living at home (though the number almost triples if you include households in which one or both parents are absent and the grandparent is actually raising the grandchildren).

When I lived in Europe I found that people there wondered about the prevalence of old-age homes in the United States. Of course they existed in Europe, but typically they were seen as the last option, not as a convenient means for grown children to preserve their options. My German friends tended to see, in Americans’ reluctance to take grandparents into the home, something lacking in our character or in the depth or sturdiness of our family bonds. An abiding recollection of my time there is the image of an elderly person, usually a woman, sitting at an upper window, elbow propped on the windowsill, looking out over the street. Of course, such arrangements aren’t easy. I recall my German girlfriend’s stories of her grandmother’s years spent in their house. She had her own room and bathroom, but took all meals together with the family, and coexistence created strains and abrasions. It was difficult, it was aggravating, it was rewarding, it was funny and sweet—it was life, in other words, in a family.

Well, the structures of society change over time, and as a general rule, people will do what they have to do, and not do what they can afford not to. And this includes older people themselves these days, many of whom can afford to live in comfortable independence. Not all can, to be sure. A friend of my daughter’s lives with her mother and grandmother. The father recently left the family, and finances are tight. When I stop, by I often see them in the family room, the kids watching TV, Mom knitting, Grandma sitting alongside, breathing with an oxygen mask. Everyone is living together and coping together, helping out in what is clearly a straitened situation with limited options.

WHAT IS THE consequence of the expanded options that so many Americans possess? For my part, I would have welcomed caring directly for my mother, and taking her into our home, at the end of her life. She was ill, and I regularly drove across the state to help her. A decade later I still acutely recall the poignant intimacies these errands of help created during her last months: taking her to chemo treatments; showing her how to use the finger-pricking gizmo to measure her blood sugar; shopping or cooking a meal for her; helping her dress; empathizing when she bit down on something one day and a tooth fell out; emptying and cleaning the portable potty she kept, toward the end, at her bedside. I would have gratefully done all of this in our own house, with my wife and then-infant daughter. My mother wouldn’t have wanted me to; she was fiercely proud and independent, and would have quaked at the thought of being, yes, a burden. Thus she had purchased long-term care insurance—though, in the end, she died before it kicked in.

But caring for her wouldn’t have been a burden at all—not in the deep sense. Rather, it would have been a joyous reciprocation of love and care for the person who loved me and cared for me so well for so many years. I would have as gladly cared for her on her way out of the world as she did for me on my way in. Thus it has been, after all, down the ages—till now, anyway. But we have embraced a vision of love in which obligation has no place, and not imposing on the ones you love is considered the greatest gift.

The dignity of the elderly and the importance of loving care for persons nearing the end of life are fundamental concepts in Catholic teaching. So too is the emphasis placed on a family’s mutually loving and rewarding relationship with its elderly members. “[T]he wisdom and experience of the elderly are recognized as a unique source of enrichment for the family,” John Paul II observed in Evangelium vitae (1995):

Their presence in the family...is of fundamental importance in creating a climate of mutual interaction and enriching communication between the different age-groups. It is therefore important to preserve, or to re-establish where it has been lost, a sort of “covenant” between generations. In this way parents, in their later years, can receive from their children the acceptance and solidarity which they themselves gave to their children when they brought them into the world. This is required by obedience to the divine commandment to honor one’s father and mother (cf. Ex 20:12; Lev 19:3). But there is more. The elderly are not only to be considered the object of our concern, closeness and service. They themselves have a valuable contribution to make to the Gospel of life. Thanks to the rich treasury of experiences they have acquired through the years, the elderly can and must be sources of wisdom and witnesses of hope and love.

How well are we equipping ourselves to receive this wisdom and this witness, or even to recognize it? In the Christian tradition, old age, mixing equal parts of wisdom and need, was understood both as an inevitable phase of the human condition and as a significant part of an individual’s spiritual path toward God. Modern life, however, with its medicalized conception of the human being—and American life in particular, with its frantic bias toward youthfulness—has tended to subvert this conception. Our contemporary attitude toward the elderly infirm reveals our deep fear of dependency. To fetishize the idea of control over one’s own fate is to betray a terror of losing it—and a latent revulsion at those who already have.

And so old age, once “characterized by dignity and surrounded with reverence” (in John Paul’s words), has sunk in our regard from veneration to dread, an attitude that facilitates what Pope Francis has called society’s “abandonment of the elderly.” Francis has often found occasion to weigh in against this trend—as he did in September 2014, when he addressed forty thousand elderly persons and their grandchildren gathered in St. Peter’s Square for a celebration of long life. In his homily Francis praised the institution of the family for fostering “the encounter between young and old, an encounter full of joy, full of faith, and full of hope.” Noting that grandparents often assume the duties of prayer and of transmitting the faith down generations, he added that they also typically “convey the experience of life, the story of a family, the story of a community or even of a people.” A family rich in such stories is rich indeed. “Blessed are those families who have grandparents nearby!” Francis enthused.

I wish more were nearby. These days we understand, forlornly, that necessity is the mother of grandmother living with your family—and of all that that arrangement used to bring. Family is a burden. It is also a blessing. We seem to find it increasingly hard to perceive that sometimes the blessing is in the burden.

An Interview with Martin Scorsese