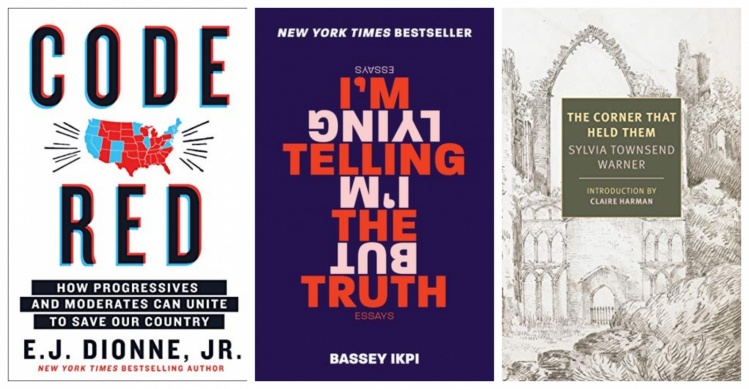 In his new book Code Red, Washington Post columnist and Commonweal contributing writer E. J. Dionne Jr. addresses all Americans who see the Trump presidency as existentially threatening to a democratic, compassionate, and equitable United States. Dionne pleads with progressive and moderate liberals not to let policy disagreements divide them as they seek to unseat Donald Trump in 2020; the Democrats’ success in the 2018 midterm elections is proof that such unity is necessary to defeat an increasingly radical Republican Party. Moderates and progressives must learn to cooperate and use each other’s strengths: moderates’ hard-nosed coalition-building and negotiation of disagreements, and progressives’ vision for systemic change and refusal to tolerate disingenuous right-wing rhetoric. One approach without the other will likely hand Donald Trump a second term.

Bassey Ikpi’s world is messy, nerve-wracking, glowing with the blue light of online shopping at three in the morning, sharp as her collarbones when she hasn’t been eating, vivid as the Nigerian family parties of her childhood. The essays that comprise I’m Telling the Truth, but I’m Lying are deeply personal and immersive, filled with details that change just as Ikpi admits her memories often do, revealing a “patchwork of feelings and sensations” that carry the reader through her failed relationships, complicated familial interactions, steady friendships, and bipolar II diagnosis. Ikpi refuses to sugarcoat; we feel the crushing weight of her rapidly cycling phases of mania and muted depression. But her continued survival is its own triumph—the end of the book feels like a sunrise after a sleepless night.

The sisters of England’s remote Oby convent have little time for spiritual reflection, consumed as they are with worldly demands—mostly related to keeping the place running. Sylvia Townsend Warner’s tale of fourteenth-century monastic life is not a historical novel so much as an account of women in community contending with quotidian annoyances, from the economic to the interpersonal (one disliked nun is described with collective relief as “sickly, and not likely to cumber them for more than a year or so”). Men are another source of headaches: a miserly prior, an impostor priest, a remote but controlling bishop; when asked a simple question, they always “respond with a treatise.” No single protagonist carries the reader through these decades of daily routine, and there isn’t really a plot; Warner breathes a world into being through witty prose and vivid imagination.