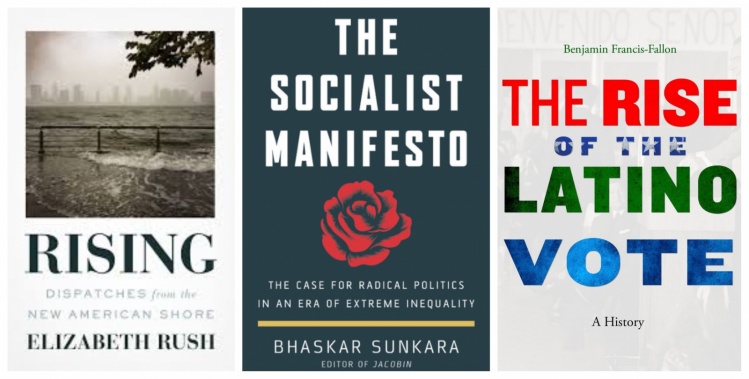 Elizabeth Rush describes nightmares of drowning: sucked under the encroaching ocean, caught in the storms that batter the American coast with increasing intensity and frequency. Reading Rising, the reader is sometimes infected with Rush’s panic. But Rush’s book is not merely a catalog of fatalistic scientific phenomena. Rather, it’s a collection of stories about individual places and the specific people who inhabit them. Chapters in residents’ own voices are interspersed with Rush’s essays about visiting high-flood-risk areas around the country. She emphasizes the outsize threat that rising waters pose to poor and marginalized communities, and her conclusion is poignant. Though it offers no false hope about the state of our coasts, Rising is a beautiful elegy for lands and communities too often invisible to society, and now disappearing.

Bhaskar Sunkara has established himself as a publishing wizard, founding Jacobin out of a dorm room at age twenty-one and fashioning it into the most influential magazine on the socialist left. His new book, audaciously titled The Socialist Manifesto, sketches a history of socialism and argues for its continued relevance. Sunkara’s gifts lie as a marketer, an explainer, a convener of talent; his quite funny first chapter distinguishes European social democracy from democratic socialism with a hypothetical involving Jon Bon Jovi and tomato sauce. His book is also an effective summary, condensing centuries into a couple hundred (rarely boring) pages. The Socialist Manifesto is an essential read for anyone curious about how the resurgent American left thinks.

The Socialist Manifesto
The Case for Radical Politics in an Era of Extreme Inequality
Bhaskar Sunkara Basic Books, $28, 288 pp.

The Rise of the Latino Vote

Is the “sleeping giant” about to awaken? The quadrennial question informs Benjamin Francis-Fallon’s The Rise of the Latino Vote. The 2020 election seems to offer an opportunity for Spanish-surnamed, Hispanic, Latino-Americans—a growing proportion of the electorate, whose communities are disproportionately affected by immigration policies—to redefine U.S. politics. The catch? There has never been a true Latinx constituency—the descriptors above have all been used to demographically group Cubans, Mexican-Americans, Puerto Ricans, and others. And immigration isn’t the only issue. Francis-Fallon’s history of Latinx political power examines the elusive idea of a unified vote, while detailing how activists, laborers, and officeholders have nevertheless influenced American politics for decades. In short, one presidential candidate’s “proficiency” in Spanish has as little to do with anything as another’s lack of it, and demographics are not destiny. The “giant’s” multitudes deserve more respect.