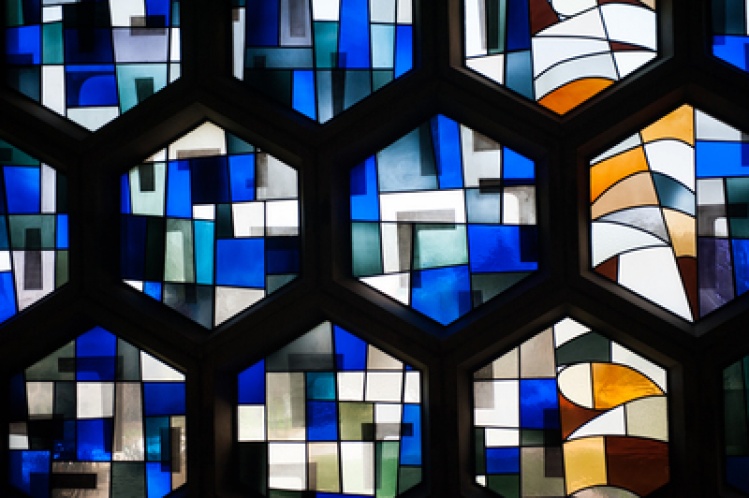 Hagiography often gets a bad rap. Usually it suggests a story told to make someone out to be better than he or she is, though the historical record reveals otherwise. But there’s a legitimate purpose for hagiography within a community of believers – it’s a recounting of a life with the goal of edifying the reader. The story is told with an eye toward the reader’s need for an example of virtue, thus it selects and highlights something laudable.

One of the delights of reading Give Us This Day, the daily prayer resource from Liturgical Press, has been the chance to come across a regular contribution by Robert Ellsberg called “Blessed Among Us.” This feature is Christian hagiography in the best sense: a short essay about a person who has lived the Beatitudes—either a saint from the liturgical calendar, or some other person whose life has given a witness worth remembering. Thus Elizabeth of Hungary is included, but also the Quaker Elizabeth Fry, who crusaded for prison reform. Augustine of Hippo is here, but also John Howard Griffin, who wrote Black Like Me. There are biblical saints and canonized martyrs, but also a day to remember the Martyrs of El Mozote, in El Salvador, the largest massacre in modern Latin American history. These essays have been collected into a book, entitled: Blessed Among Us: Day by Day with Saintly Witnesses (Liturgical Press, $29.95 hardcover, $19.99 e-book).

Robert Ellsberg, son of the famous whistle-blower Daniel Ellsberg, converted to Catholicism after a life-changing stint with Dorothy Day at the Catholic Worker (he would subsequently edit her diaries and letters for publication). He is currently editor-in-chief and publisher at Orbis Press. He has written often about saints, and does so skillfully. The writing is simple and straightforward, the approach neither sentimental nor preachy. He tells their story, focusing on their faith, their love of neighbor, their courage, their perseverance, significant events they witnessed or made happen, and so on. The book does not mirror the preoccupations of older collections of Catholic saints’ lives which focused on miracles or prodigies of self-denial or the founding of institutions. Rather, this is a mixture of religious and moral figures chosen for their “great minds and souls” and who “challenge us to see and interpret the reality of our own time” (from the introduction). The underlying principle of the whole book is found in the Beatitudes and Matthew 25.

The book is arranged in calendar fashion. There are two one-page biographies for each day of the year, and they open on facing pages. There is a pithy quotation, either from the person who is profiled, or about that person, at the end of each entry. Those who are familiar with St. John’s Abbey will recognize a couple of visual hat tips to the monastery. The honeycomb design on the cover of the book echoes the windows of the abbey church (pictured above). The church is a famous one, designed by Marcel Breuer in 1962. (The saints’ images pictured within the honeycomb are from another source: the Dancing Saints icon at St. Gregory of Nyssa Episcopal Church in San Francisco.) The Abbey cross appears on the frontispiece and each of the chapter divisions.

I have a number of books on saints in my library, as I suspect most of the readers of Commonweal do. The Oxford Book of Saints is one of my favorites because of its extensive and meticulously researched historical data. What the Blue Guide is to travel, the Oxford Book of Saints is to lives of the saints (not surprisingly it is especially good on saints of the British Isles). Another favorite of mine is Saints and Their Symbols by Fernando and Gioia Lanzi, a beautifully illustrated art book translated from the Italian. It includes a visual glossary of saints’ attributes, which has helped me many a time to identify obscure saints on church walls, and it’s a pleasure to browse through the pictures and marvel at how many different groups of people have claimed these saints as patrons through the ages, and why. Joseph Tylenda’s Saints of the Liturgical Year: Brief Biographies is a cherished pocket-sized work (especially fine on the Jesuit saints), well-written and pithy. The three contemporary picture books, Patrons and Protectors, cleverly illustrated by Mickey McGrath, also have a place on my shelves, as does the guidebook-style anthology, Saints in Art, produced by the Getty Museum. The latter work is in shape and feel very much like an Insight Guide—lots of pictures, with pointers indicating the things to look for when seeing the art.

Blessed Among Us, however, is different from all of these. It occupies a niche of its own: well-researched yet devotional, always fresh and compelling, mainstream yet “outside the box.” I know that when I open it I will encounter stories of the goodness of others, and be challenged to be a better person myself.