Bishops of the World Unite on Climate Change 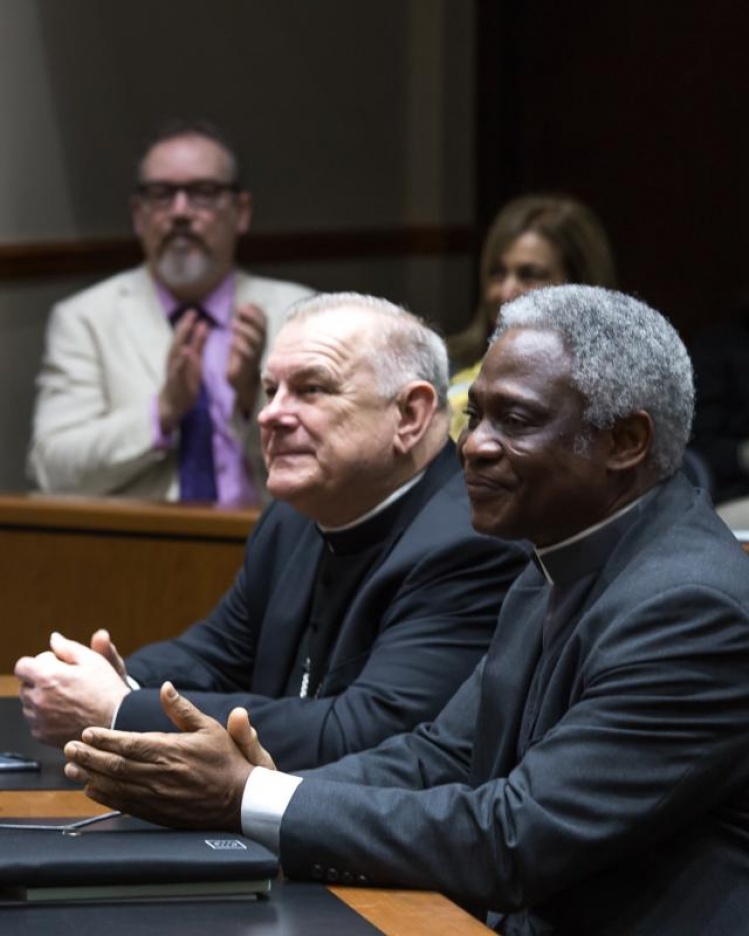 Miami Archbishop Thomas G. Wenski, left, and Ghanaian Cardinal Peter Turkson, president of the Pontifical Council for Justice and Peace, at an international conference on climate change at St. Thomas University in 2016.

After Pope Francis asked the Pontifical Council for Justice and Peace to work on an encyclical on the environment, Cardinal Turkson’s diligent-but-understaffed office scrambled to get him a draft by the end of last summer. They fully expected a release toward the end of last year. But Pope Francis sat on it. Part of the reason, it seems, is that he wanted to consult far and wide. But another part of the reason is that he always planned to issue it in 2015—to be able to influence COP21.

What is COP21? In classic bureaucrat-speak, it means the 21st annual meeting of the “Conference of the Parties” to the 1992 United Nations Framework Convention on Climate Change (UNFCCC). It was in 1992 at the Rio Earth Summit when world leaders first united to address the terrifying consequence of man-made global warming. Specifically, the UNFCCC seeks to achieve “stabilization of greenhouse gas concentrations in the atmosphere at a level that would prevent dangerous anthropogenic interference with the climate system”. This has been subsequently interpreted as keeping the rise in global mean temperature to 2 degrees Celsius above pre-industrial levels—the threshold beyond which disaster seems inevitable.

Since the Rio summit all those years ago, the result has been….nothing. Nada. Zilch. We’ve kicked the can down the road so many times that there’s barely any road left. In Laudato Si’, Pope Francis calls attention to this shameful inaction, this dereliction of our gravest duty. He says that by putting “national interests above the global common good”, the world is guilty of “failure of conscience and responsibility”.

He then adds: “We believers cannot fail to ask God for a positive outcome to the present discussions, so that future generations will not have to suffer the effects of our ill-advised delays”.

He is, of course, talking about COP21, which will take place in Paris in November/ December. Given the scale and speed of climate change, this is really the last chance for a serious agreement before the clocks runs out.

This is why heads of all continental associations of bishops conference—alongside the United States and Canada—have come together to sign an appeal to political leaders who will soon be gathering for COP21.

Inspired by Laudato Si’ and the tireless advocacy of Pope Francis to protect our common home, the world’s bishops are calling for “a fair, legally binding and truly transformational climate agreement”.

They link to their call to the plight of the world’s poorest and most vulnerable people—those least responsible for climate change, but the first to feel its full force. It’s worth recalling that the bottom three billion people account for a mere 6 percent of the cumulative carbon emissions that threaten to devastate our planet. So we owe a debt of justice here—part of what Pope Francis terms the “ecological debt” between north and south. First and foremost, this means the richer countries taking on most of the responsibility for reducing carbon emissions.

The strongest part of the appeal lies in its call for complete decarbonization by midcentury. In the run-up to this statement, there had been some debate over whether the Church should endorse a specific temperature ceiling. Here, there was some back-and-forth between those who favored the internationally-accepted 2-degree guardrail, and those who wanted more ambition—defined as 1.5 degrees. The island nations in particular were worried that a 2-degree rise would not save them. And some leading climate scientists, such as Jim Hansen, now believe that 2 degrees might be too risky, given evidence that tipping points and dangerous feedback loops could kick in at lower temperatures than once thought. The problem, though, is that 1.5 degrees seems infeasible. The earth has already warmed by 0.9 degrees, and some people think that another half degrees is inevitable at this point. We’ve simply left it too late.

To balance these competing concerns, Cardinal Turkson—in a recent speech at Boston College—called for an agreement at COP21 “to keep the global temperature from rising more than 1.5 or 2.0 degrees Celsius above pre-industrial levels”. This new appeal takes the same approach. Although it doesn’t mention a specific number, full decarbonization by 2050 is equivalent to a temperature increase of somewhere between 1.5 degrees and 2 degrees (with the usual caveats about huge uncertainty in these interpolations!).

The bottom line is that the world’s bishops are for the first time fully united behind an extremely ambitious climate agenda—and that includes the US bishops. It also coheres with other religious calls. For example, the multi-religious Faiths for Earth campaign—led at the global level by Desmond Tutu—is also calling for a hundred percent renewable energy by 2050.

This is an ambitious path with profound implications for economic systems and business models. Yet it is a path we must take. New research suggests that by doing nothing, global output would fall by 23 percent by century’s end—and with the poor being hit with particular severity. Yet decarbonization would, on best estimates, cost only 1-2 percent of global GDP. We have the technology to make this possible, and renewables are now pretty much cost-competitive with fossil fuels (and constantly getting cheaper). It makes no economic sense to stick to business as usual. The only real impediment is narrow vested interests, and those who put their short-term private gain over the long-term common good.

This is why the world’s bishops seek an agreement that is at once “fair, legally binding, and truly transformational”. Nothing else will cut it.

This appeal leaves the deniers and those who refuse to act with nowhere to hide. The urgency and the ambition of this call are driven by morality. Refusing to act would be a scandalous form of moral blindness and a full-frontal assault on global solidarity. There’s a strong message here for the American Republican party, which is now the only major party in the world actively opposing any attempts to reduce carbon emissions. On this issue, they are not only on the wrong side of history, but on the wrong side of morality.

Climate Change and the Migrant Crisis