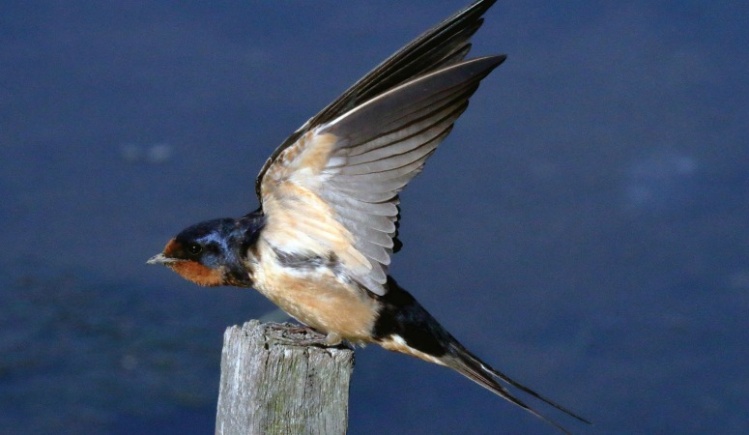 The other day, I heard a sound that was new to me in nature. I was out on an island in London’s Thames estuary. As evening drew on, I was watching geese on a bank by the side of a creek. Above me were telephone wires strung between poles.

I did not particularly notice the starlings at first. They came flying in and settled on the wires, sometimes in small groups, sometimes in packs. These are the gaudy con men (or women) of the bird world, dressed in spangled purple.

I began to give them full attention. Gradually the wires began to resemble thick black cables as more and more arrivals somehow squeezed themselves into the throngs already perched there, wheezing, clicking, whistling, and chuckling as they do. The wires swayed as birds kept on landing. There were hundreds of them now.

Without warning they flew down as one into the field below them. The grass turned black. Then silence fell. You could sense them waiting, preparing. Something was going to happen. And abruptly all of them exploded into the air together like a miniature nuclear bomb. Think of the sound when a bird spreads its wings and takes off, and multiply it by hundreds. I can hear it in my imagination still.

So there I was, bird watching. Many years ago when I began this pursuit it was regarded as somewhat odd, out of the mainstream. Not now. As an awareness of natural ecology has spread, people understand that birds are a link in the chain that has human beings at its apex. A link that is complete in itself, inviting and repaying intense study that can take a lifetime.

There are different sorts of bird watchers. That’s a portmanteau word that covers them all, but there are gradations within it. “Bird watchers” as such tend to be more passive. Some of them, though aware of birds, are not in the business of identifying them and becoming familiar with their habits; others associate birds witrh particular landscapes, and give their heart to both; others again concentrate on the lives and behavior of particular species; others like to go to reserves and be shown the latest attraction or rarity.

“Birders” like me are proactive, visiting promising sites to see what may turn up. We are thrilled if we come across species less familiar to us, but we are also capable of spending half an afternoon watching a larks’ nest in a field, observing the parents come and go along a grass tunnel, feeding their young.

That’s how I started—watching the common sparrow. I woke one morning as a boy to find myself paralyzed down my back—very frightening at that or any age. The doctor diagnosed rheumatic fever, and prescribed resting all that summer, in bed. When the weather was good my mum would put a camp bed in the garden and I’d spend the time there. Looking up I watched the sparrows under the eaves of our house, courting, lechering, chattering, bringing in long wisps of straw or grass for their nests, then later feeding their young and teaching them to fly.

A friend down the road lent me a bird book his family had. By today’s standards it would be considered an amateur job, lacking altogether the detailed depiction of plumage with pointers to the diagnostic marks, the precise description of note, song, and habitat. But what the pictures in its pages did do was reveal the mystery that was lying all around me unnoticed, waiting to be discovered. At the end of the garden there would be blue tits hanging under twigs like acrobats, perhaps a song thrush’s nest with blue eggs, and in the woods down the road there would be migrants that had flown from Africa, tiny bundles of fluff, warblers, navigating in ways that are still little understood.

How come the Arctic tern crosses the globe from north to south and back again annually; that adult cuckoos migrate before their offspring, which nevertheless know how to follow them; that after young swifts leave their nest, they may not land again for several years afterwards?

The world is full of marvels, and some of them are closer than you think. I was hooked. I still am.

“Twitchers” are a different bird watching tribe again, though almost all bird watchers and birders have a touch of the twitcher in them. No one quite knows why they are called that, but it is possible the name refers to the movement or twitch of the hand as it puts a check by each species seen. Twitchers collect species of birds as train spotters collect engines. The aim is to reach the highest total of different kinds in a year, and top twitchers are intensively competitive. They are plugged into a telephone network that reports to them hour by hour where the latest rarity has turned up, and they will drop everything and drive through the night if necessary to add it to their list.

Like bird watchers everywhere, most twitchers are males. Some look as though they might be lorry drivers or brick layers, and may sport tattoos. Others are artistic-looking types, with shoulder-length hair and earrings. If I spot a group of them, I like to set up my telescope near them so I can hear them talk. They live for birds and you will not hear conversations like that anywhere else. I am careful not to say much myself, for my accent is at once labelled as “posh,” which to them means that I cannot be seriously dedicated, as they are. And indeed most birders are somewhat afraid of twitchers, for their capacity to spot and identify any bird is phenomenal.

I watched a television program about them once. It featured the autumn descent of twitchers onto the Scilly Isles, lying out in the English Channel, and a prime spot for rare bird visitors that are passing through or have strayed off course. The television program showed the passengers descending from the ferry in serried ranks, one after the other, wearing their distinctive camouflage clothing with telescopes over their shoulders like guns. An army of twitchers, raring to go.

Things went well at first, but then came disruption. On the radio network it was reported that an unusual flycatcher, a jewel amongst rarities, had turned up in Wales. The twitchers rushed off en masse to the airport to charter a helicopter or light plane. But the chief of them was in a dilemma. He had just arrived and this visit to the Scillies was meant to be his honeymoon. Which came first—the rarity or his new wife? He decided he had to stay behind with her, but the regret in his voice as he was interviewed showed that he felt he had not chosen wisely. In any case, he added, the marriage did not last, because the wife found it impossible to put up with his “antics.”

BIRD WATCHING IS not in essence an objective pursuit, like the study and naming of trees and butterflies, though these can lead on to it. It’s a passion. It’s a love affair. It was for St. Francis, who loved birds especially and preached to them as his sisters. They listened, then flew off, according to the stories, to the four quarters of the world. St. Francis’s friars wore brown and had hoods, like the larks, and like them were always singing.

In his “green” encyclical letter, Laudato si’, Pope Francis reflects on why the saint whose name he took called birds his “sisters.” It was to emphasize, the pope says, how far they were from being objects.

Birds give us an insight into creation that dogs and cats, for example, don’t. Dogs might want to be like us; birds do not. They are a separate branch of evolution, complete in itself. So watching them can transport us to places that dogs and cats can’t. Bird watching takes us to Creation as it exists outside us. When a nightingale is in full flow, it is doing something different from what a tenor or a diva does in an opera performance.

When I go to the woods or marshes, I often spend the first half-hour just soaking myself in the space around me—the water meadows and fields, the woods, pools and dykes, the smell of the wild, the huge skies. Human beings don’t command space like birds do. Flying in a plane, you are an intruder. For humans, space is not a natural element, whereas for a bird, it is.

There’s a healing power in that. In Britain we have two celebrated naturalists, Eric Mabey and Mark Cocker, who wrote a remarkable book together called Birds Britannica. Or rather, their names appear together on the cover. In fact the book was written by Cocker, because Mabey was suffering from a complete nervous breakdown that lasted for two years.

When he eventually emerged, he wrote a book called Nature Cure. He describes how the whole world of nature lost its resonance for him. He had loved it. Now it no longer spoke to him in any way. It was dumb, mute, dead. He couldn’t read the signs any more. The spirit went out of it.

He’s less good about how the meaning came creeping back, I think because he does not really understand it. He has no theology.

In a minor way, because in my case it was always passing, I have had the same experience. I remember the moment out in the marshes when the Black Dog of depression left me. I was sitting helplessly on a large white branch beside the shore, thrown up as jetsam by the sea, dead. I felt nothing, just a void. The woman who was with me shared without speaking. But then I gradually became conscious that there were clouds of wading birds over the creek that day, twisting and turning in unison according to some extraordinary sixth sense. A thought came to me unbidden, as clear as though someone had spoken it: “It is all worth it.” The devils that had fastened on my shoulder departed, and did not come back.

Like Mabey, I had experienced a nature cure. Bird watching takes people out of themselves. It changes you. You are looking at a realm of nature that is apart from you and has to be treasured as it is in itself. If you give it love, it will give you joy.