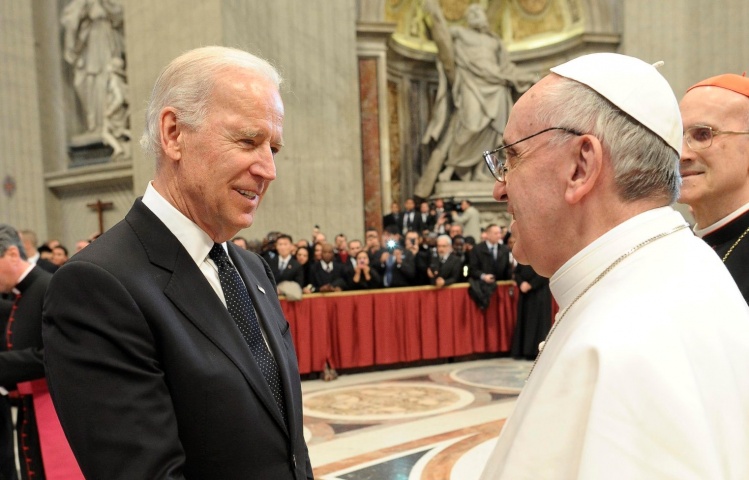 There has been an avalanche of commentary—much celebration, as well as agita and suspicion—about the election of the second Catholic president. Reactions usually depend on where one falls on the ideological spectrum and how deeply one is invested in, or worried about, Catholic influence in our common life. The New York Times columnist Ross Douthat, a conservative Catholic, thinks Biden “has elevated his own liberal Catholicism to the center of our national life.” I’m not so sure of that. Biden’s unselfconscious piety is appealing, but hardly likely to inspire religious renewal, let alone fervor. But if the U.S. bishops make the mistake of pushing him out the church door because of his position on abortion, it would certainly draw some national attention to his faith.

The ascendance of liberal Catholicism as a possible “new religious center to our divided society” is not a development Douthat had anticipated, nor is it one he relishes. He is respectful of Biden’s sincere faith, but unconvinced that liberal Catholicism has much to offer our increasingly secular and “decadent” culture. Douthat does concede that “liberal Catholicism sometimes seems to capture the universalist aspiration of the church better than its conservative and traditionalist subcultures.” But he warns that too appears as little more “than a vague spirituality, a generic humanitarianism. Which means that the liberal Catholic worldview is constantly in danger of simply being subsumed into political liberalism, with all religious distinctives shorn away.”

A healthy liberal Catholicism ought to recognize that such dangers do exist. Writing in the New Yorker, Paul Elie notes that, “Biden’s nondoctrinaire Catholicism is driving comparisons with Pope Francis, who has vexed traditionalist U.S. bishops much the way Biden has.... The hope is that the Biden Administration will invigorate American Catholicism, and visa versa.” It is important to understand, Elie goes on, that Francis “is much more progressive than Biden” on climate change and neoliberal capitalism. He proposes that Biden use Francis’s outspokenness and the broader language of faith as an inspiration to move “emphatically leftward” on domestic and economic issues. Yet Biden’s status as a “churchgoing, rosary-carrying,” Communion-receiving Catholic is anything but secure. Archbishop José Gomez of Los Angeles, president of the USCCB, issued a firmly worded statement on Inauguration Day condemning Biden for “pursuing certain policies that would advance moral evils and threaten human life and dignity, most seriously in the areas of abortion, contraception, marriage and gender.” Abortion, Gomez insisted, “remains the ‘preeminent’ issue.” Elie worries that “the same Catholic traditionalists who detest Pope Francis detest the new president, and spiteful right-wing resistance may block any progressive initiative from Biden, as it has blocked those of Francis in Rome.”

It takes real chutzpah for a conservative Catholic and John Paul II devotee to complain about Vatican interference in a national bishops’ conference.
sharetweet

One shouldn’t exaggerate the overlap between right-wingers at large and traditionalists in the Vatican. Trump’s former adviser Steve Bannon, for example, garnered headlines by allying himself with traditionalist Catholics in Europe, but his credentials as a man of faith are spotty, to say the least. But the National Catholic Reporter’s Michael Sean Winters writes that some influential conservative Catholics and U.S. bishops are eager to exploit any controversy over Biden’s Catholicism to hasten a final reckoning with so-called nondoctrinaire believers. He points to an article by George Weigel in First Things as evidence. Biden, Weigel claims, doesn’t just say the rosary, he’s “famous for bragging” about it. Weigel offers no quarter to those who insist on the complexity of abortion as a political and legal question. Gomez’s statement, Weigel insists, was not disrespectful but probably “too balanced and measured.” Objections raised by Cardinals Blase Cupich and Joseph Tobin to the timing and style of the letter—they allegedly tried “to badger Archbishop Gomez into silence”—were predictable interventions by papal lackeys and “do not bear careful scrutiny.” And the Vatican’s efforts to forestall the release of Gomez’s letter were an “unprecedented interference in the proposed action of a national conference of bishops” and evidence of a “new ultramontanism.” Biden’s election, Weigel concludes, is “an inflection point” and an “unprecedented challenge to the Church’s sacramental and moral coherence.” He hopes the committee Gomez has set up to confront the president will soon issue a “conference statement on the Church’s Eucharistic coherence” that would presumably call for Biden to be denied Communion.

Biden’s support for abortion rights must not be brushed aside by his Catholic defenders. It is a problem, for him and for them. But Gomez’s statement, issued on Inauguration Day, was an ill-timed and poorly formulated provocation, confirming the suspicion of many Catholics that the USCCB has become an apologist for the Republican Party. As a friend who is a longtime opponent of Roe put it to me in an email, “My only substantive thought on an episcopal suicide mission barring Biden from Communion is that this is a sure way to relieve the priest shortage by reducing the number of Catholics now and in the future in the church.”

Weigel’s article and the controversies surrounding Biden’s Catholicism are revealing in another way. It takes real chutzpah for a conservative Catholic and John Paul II devotee to complain about Vatican interference in a national bishops’ conference. Conservative Catholics, including Weigel, argued for decades that national conferences have no ecclesial standing. Bishops, they reminded us, are appointed by, and directly responsible to, the pope, not to national churches. It is so-called liberal theologians who have advocated devolving authority from the Vatican to the conferences. When the USCCB issued statements in the 1980s questioning U.S. nuclear-deterrence strategy and economic inequality, conservatives like Weigel mounted aggressive campaigns questioning the USCCB’s authority and calling for papal intervention. Now that the tone and policies in Rome have changed, so apparently has the ideal locus of Church decision-making. Unfortunately, this “shopping for a judge” is also common among liberal and left-wing Catholics. After vigorously objecting to the Vatican investigation of U.S. religious women under Benedict XVI, NCR has now called for Rome to investigate the USCCB for its passive response to Trump and criticism of Biden.

The politicization of religion, either from the Right or the Left, has driven many Catholics out of the Church. Pope Francis’s effort to turn away from a confrontational approach to abortion, homosexuality, and similar issues is a pastoral step toward greater unity, not the repudiation of tradition his conservative critics accuse him of. “Pontiff,” after all, is derived from the Latin word for bridge-maker. The bishops are at their least persuasive when they issue statements that seem neatly aligned with the priorities of one political party.

If nothing else, the controversy over Biden’s Catholic identity reminds us that looking to the papacy to resolve deep divisions in the local Church is usually a sign of desperation, not a search for communion. It didn’t work for conservatives under John Paul II and Benedict XVI, and it won’t work for liberals under Francis. In the meantime, let’s hope the USCCB stops short of barring Biden from Communion. An even greater indifferentism, rather than schism, would be the likely result.