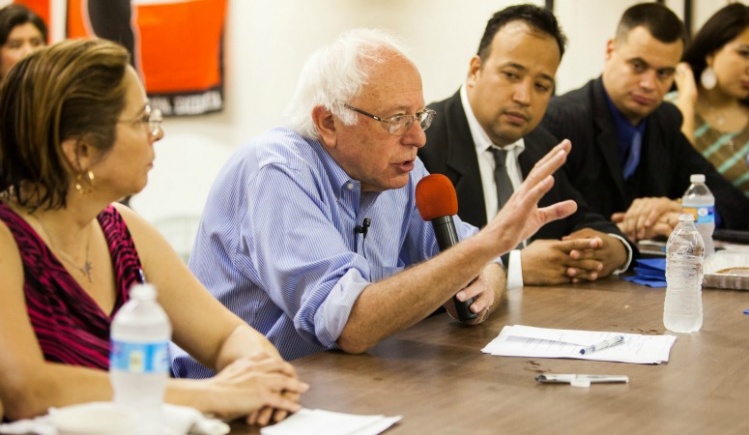 When Bernie Sanders released the details of his “Medicare for All” single-payer healthcare proposal ahead of the Democratic debate last week, the plan was widely panned by journalists and pundits as an unserious, pie-in-the-sky idea that could never possibly see the light of day. But it was perhaps even more audacious than many of its critics realized: in contrast to the Affordable Care Act, whose drafters deliberately excluded undocumented immigrants from being eligible for coverage in order to avoid stepping into an even bigger political minefield than the one they were already in, Sanders’ policy advisor Warren Gunnels confirmed to reporters that the senator envisions an expanded Medicare being open to at least some of those living in the country illegally.

This is almost certainly one of the boldest pro-immigrant positions espoused by a major party candidate in recent history. A casual observer might reasonably infer from his willingness to take such a stand that Sanders must be the clear favorite of those who lobby on behalf of immigrant rights. Yet throughout the campaign, he has been dogged by criticism of his immigration record – from the left.

Much of it has revolved around his 2007 vote against a failed bipartisan immigration reform bill in the Senate, which he opposed on account of a provision that would have expanded so-called “guest worker” programs that allow foreigners to work in the U.S. on a temporary basis without being granted permanent residency. Some have also highlighted purportedly anti-immigrant statements that Sanders made during the time the bill was being considered, such as his comment to Lou Dobbs that “if wages are going down, I don’t know why we need millions of people to be coming into this country as guest workers who will… drive wages down even lower than they are right now.”

In reality, Sanders’ position on immigration is not anti-immigrant at all; it is motivated by the same progressive vision that animates the rest of his platform. According to Daniel Costa of the Economic Policy Institute, Sanders’ opposition to guest worker programs like the H-2A, H-2B, and H-1B, and his support for a pathway to citizenship for the undocumented are not at all contradictory, but stem from the same underlying concerns:

Sanders understands that having eight million people working in the U.S. labor market without labor and employment rights puts downward pressure on the wages and working conditions of all workers. He has not failed to point this out. There’s no question that Sanders’ desire for legalization of the unauthorized population is consistent with his broader agenda to see wages rise for workers in the United States.

During an interview with the Vermont independent last summer, Vox’s Ezra Klein raised the prospect of the United States adopting an “open borders” policy as a means of combating global poverty. Sanders was clearly taken aback. “Open borders? That’s a Koch brothers proposal,” he replied. Klein was unpersuaded:

Klein: It would make a lot of the global poor richer, wouldn’t it?

Sanders: And it’d make everybody in America poorer… If you believe in a nation-state… you have an obligation, in my view, to do everything we can to help poor people [abroad]. [But] what right-wing people in this country would love is an open border policy, bring in all kinds of people [to] work for two or three dollars an hour. That would be great for them. I don’t believe in that.

As Sanders has routinely emphasized, that we have an obligation to offer asylum to refugees fleeing violence and persecution is undeniable. But there are far too many of the “global poor” for mass immigration to the United States to be a workable response to their plight. In a guest post on Sanders’ campaign website, writer Richard Eskow expands on this theme, arguing that “[t]he principal instrument for [economic and political] change is the democratic nation-state, an entity which the open borders concept would seriously weaken.”

Whether immigration in general represents a net benefit or net cost to native-born Americans is a question on which economists have yet to find consensus (and the answer in any case is almost certainly "it depends"). What is not controversial – at least among those with no vested interest in keeping wages low – is that temporary guest worker programs are unambiguously harmful, both to the American workers who end up replaced by lower paid guest workers and to the guest workers themselves, who are generally bound to a particular employer in a kind of indentured servitude and who have little to no recourse if they are exploited. And that’s to say nothing of the scandal caused when a society ostensibly committed to democratic ideals profits from the labor of a resident underclass denied the same rights enjoyed by the rest of the citizenry.

Among those concerned about this constellation of injustices is the U.S. Conference of Catholic Bishops. In 2013, Archbishop José Gomez of Los Angeles testified before Congress that “[t]he U.S. Catholic bishops have long been skeptical of large-scale ‘guest worker’ programs,” and insisted that migrants should be guaranteed “wage levels… equal to those afforded to domestic workers,” “the same protections of U.S. labor law as U.S. workers,” and the ability to “not be tied to one employer.” If Bernie Sanders is anti-immigrant, then so is the USCCB.

In a speech before the Hispanic Chamber of Commerce last summer, Sanders declared that “there is a reason why Wall Street and all of corporate America likes immigration reform, and it is not, in my view, that they’re staying up nights worrying about undocumented workers in this country.” Indeed, the tendency of many progressives to suspend their ordinary skepticism about the motives of corporate lobbyists when the subject turns to immigration is alarming. Yet it probably helps explain why Sanders’ 2016 stump speech has thus far omitted the sort of concerns he shared with Lou Dobbs a decade ago.

It will be interesting to see how Sanders handles this issue if he makes it to the general election. He and his surrogates have repeatedly discussed their intention to win over Trump supporters, whom they claim are angry at the wrong people for the right reasons. But perhaps out of a desire to avoid even more charges of anti-immigrant animus, Sanders has thus far refrained from making explicit the fact that business-friendly immigration policies have had deleterious effects on American workers. A careful articulation of the nuanced point that this can be so even though immigrants and guest workers themselves are just human beings looking to better their lives would strike at the roots of Trumpist demagoguery in a way that blithe dismissals of Trump supporters as xenophobes have failed to do. Whether the voters will get to hear someone make that point this election season remains to be seen.