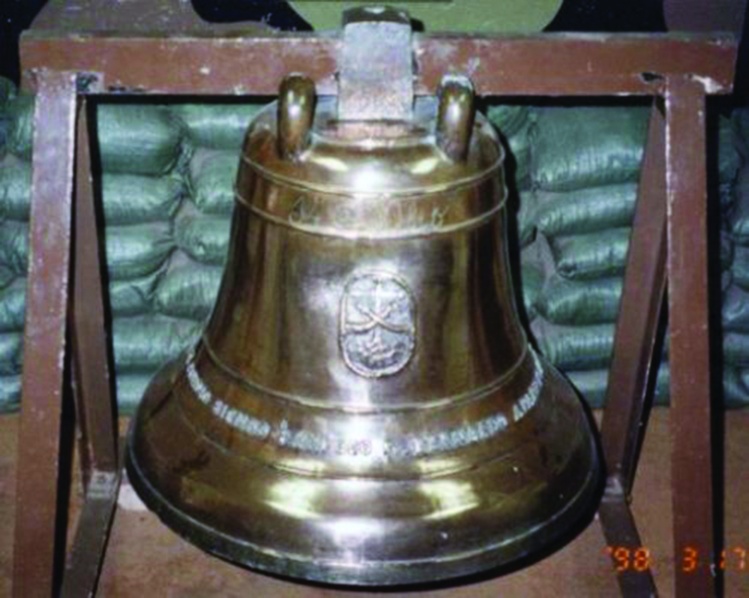 President Barack Obama concluded his brief April visit to the Philippines with a new and controversial agreement allowing U.S. troops to be stationed there. One outspoken opponent of the Enhanced Defense Cooperation Agreement (EDCA) is former Filipino Senator R. A. V. Saguisag, who had been involved in ending the presence of foreign troops in his country in 1991 after four hundred uninterrupted years. In a newspaper interview, Saguisag granted that the agreement, which he believed to be unconstitutional, was now a fait accompli. When asked what the United States could do to mitigate opposition to the EDCA, he suggested they could return the Bells of Balangiga.

The Bells of Balangiga? It seems that in 1901, during the war in the Philippines, U.S. troops took as war booty some church bells that had been rung as a signal for Filipino insurgents to rush out of the church and slaughter the troops there. For the last couple of decades, many Filipinos have been urging their return.

The war in the Philippines, when thought about at all, is usually seen as a mere footnote to the so-called Spanish-American War of 1898. It straddled two centuries—1898 to 1902—and could be seen as the United States’ first venture in imperialism. After the February 15, 1898 sinking of the Maine—a battleship stationed in Havana harbor to protect U.S. interests during the Cuban war of independence from Spain—bloodlust inspired by the yellow journalism of Hearst and Pulitzer (Remember the Maine, to Hell with Spain!) pushed President McKinley to declare war on an already weakened Spanish Empire.

As Teddy Roosevelt charged up San Juan Hill in eastern Cuba, Admiral Dewey’s Pacific fleet sailed into Manila Bay on May 1 and put paid to the vaunted Spanish fleet. The war with Spain ended with the Treaty of Paris on December 10, 1898, and what Secretary of State John Hay was to call a “splendid little war” seemed to be over. But what followed the Paris peace treaty was the Philippine-American war, with U.S. troops now fighting against the Filipino insurrectionists who naively believed the Americans had come to help them secure their independence. Three years of largely guerrilla warfare ensued between the self-proclaimed Philippine Republic and the American liberators, now seen as invaders. It took the lives of 4,200 U.S. troops and some 20,000 Filipino combatants.

One of the worst atrocities of the war was the second Massacre of Balangiga—that is, the U.S. destruction of the town of Balangiga in the central island of Samar. This was in reprisal for the first massacre, a carefully planned Filipino attack against U.S. troops on September 28, 1901. Thirty-four rebels, disguised as women, had brought small coffins into the parish church, claiming that a cholera epidemic had killed many of the local children. The sentry on duty was suspicious but did indeed find what he took to be a child in the coffin he inspected, and so the rest were allowed to enter.

On a given signal—the ringing of the church bells—the rebels took their bolos out of the coffins and burst into the plaza where the American troops were eating breakfast. Some forty U.S. troops were killed, as were at least twenty-eight of the insurgents. It was a shocking defeat—the Army’s worst since the Battle of Little Big Horn.

The U.S. commander in the Philippines, Brigadier General Jacob H. Smith, determined to revenge the attack, was reported to have said, “I want no prisoners. I wish you to kill and burn…. The interior of Samar must be made a howling wilderness.” Thus, the second Balangiga massacre: The thatched huts of the town were set ablaze and many—some say hundreds—of villagers were hunted down and killed. Smith was reported to have ordered the killing of every male over ten years of age, for which he was later court-martialed, reprimanded but not formally punished, and forced into retirement.

When the American troops finally left, they took with them three church bells as war booty. Two of them are now enshrined as trophies at F. E. Warren Air Force Base in Wyoming, while the third is kept with the U.S. Ninth Infantry Regiment, presently in South Korea.

There have been efforts over the years to bring the bells home to Balangiga. On the fiftieth anniversary of the 1944 U.S. landing on Leyte, letters to the editor in the Philippine press urged the return of the bells. That same year, in his visit to the Islands, President Bill Clinton pledged to give them back. In 1998, when the country marked a century of independence from Spain, the Philippine government again pressed the issue, and the town of Balangiga built a belfry on the reconstructed church in anticipation of the bells’ return.

At that point, Catholic leaders in both countries took up the issue. In 1999, the U.S. bishops’ conference expressed support for an effort in Congress to secure the return. In 2003, Bishop Leonardo Medroso of Borongan, Balangiga’s diocese, wrote to President George W. Bush, as did the archbishop of Cotabato, Orlando Quevedo, OMI (recently made a cardinal by Pope Francis). Both insisted that the bells were church property and thus inappropriate as war booty. Two years later the Philippine Embassy in Washington commended the efforts of the Borongan diocese’s Global Petition Campaign, which was addressed to the Helsinki Commission, the U.S. Congress and, again, President Bush. All to no effect.

Then, on November 8 last year, the deadliest typhoon in Philippine history ravaged much of the country and especially the islands of Samar and Leyte. The city of Tacloban, epicenter of the damage, is a short distance from Balangiga. Both cities were devastated by Typhoon Haiyan. Two weeks after the cyclone hit, the headline in the Balangiga paper read: “Please, can we have our bells back?”

Filipinos recall with gratitude the role American troops played in freeing their country from the Japanese invaders seventy years ago and are deeply grateful for the rapid response of U.S. troops in the current natural disaster.  But those who know their history, and certainly those in the devastated islands of Leyte and Samar, know of the dark period in U.S.-Philippine relations at the beginning of the twentieth century. The Balangiga massacre and the theft of the church bells are not forgotten.

Pope Francis will be visiting the Philippines in January for the fifty-first International Eucharist Congress and will go specifically to the areas most affected by the typhoon. His expression of concern for the devastation suffered by the people of Samar and Leyte could provide the United States an ideal opportunity to return the church bells to Balangiga, symbolically closing an unfortunate chapter in the relationship. Those people have suffered enough.  It is time to send the bells back.

Another Pope, a Different Cuba