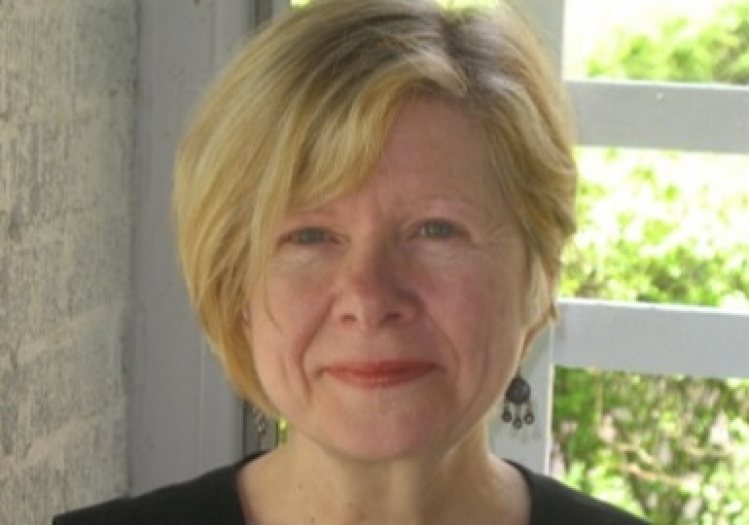 Valerie Sayers, professor of English at the University of Notre Dame, is the author of six novels, of which her most recent is The Powers, cited by Publishers Weekly for its “nuanced acumen and sophistication” and which the Washington Post called “brilliantly realized.” Her short stories, essays, and reviews have appeared widely in a number of publications, including Commonweal.

The Powers is set in New York in the summer of 1941, with the war in Europe and Joe DiMaggio’s epic fifty-six-game hitting streak as backdrops. The novel features a number of historical figures as characters, including DiMaggio himself and Dorothy Day, as well as the fictional Babe O’Leary and her granddaughter, seventeen-year old Agnes, who is trying to reconcile the conflicting impulses she feels—pacifism vs. interventionism, love vs. passion, family vs. independence, religion vs. art—as she enters adulthood.

Dominic Preziosi: From the first page of The Powers, I found myself hooked, in large part because I found myself immediately trusting the author. For one thing, you really seem to know a lot about baseball.

Valerie Sayers: The truth is I don’t. I’m an emotional fan. I tell people, and this is my line, that I watch baseball like a girl. I certainly watched it as a girl. I was looking for the cute guys, and was always working on a narrative—I had a narrative for all of them. And I loved [one-time Yankee shortstop] Tony Kubek with all my heart. But the novel was in fact very difficult for me that way, and I was worried it would be riddled with errors. I counted on my editor and copy editor and also had a lot of people who knew about baseball read it.

DP: The heroine of The Powers is Agnes, who comes off the page as very real and rounded, with a complexity arising in part from the combination of her Irish and Italian ancestry.

VS: The scenes where she becomes reacquainted with her Italian grandfather were really crucial for me, because throughout the novel she is taking sides, having to choose between Joe and Bernie [her two suitors], or let’s go to war or let’s be pacifists, or whether to believe in God or go the other way. It was crucial for me to dramatize the impact of her choices in some way: Is she going to be Irish or is she going to be Italian?

DP: We also get to meet Dorothy Day in the novel. What kind of work did you have to do to “write” Dorothy Day?

VS: Well, perhaps I didn’t do enough. But I read so much about her, and of course have read her work over the years, and I teach The Long Loneliness. A writer friend asked me: Weren’t you tempted to give her the same voice you did Joe DiMaggio, to get into her head? And I said it never occurred to me because she’s written her own story. How could I get inside Dorothy Day’s head better than Dorothy Day had done?

DP: The Powers includes several scenes set at the offices of the Catholic Worker. How did you decide to include a sex scene among them?

VS: I wouldn’t say I decided in advance; I think that’s where the novel led me. That choice was such a crucial one for Agnes. In some ways it was a ritual re-enactment of the way her mother became pregnant. And that’s always been interesting to me, the way we repeat the patterns and the power they hold over us without us necessarily knowing what’s going on.

VS: It helped immeasurably. That sense of being an outsider is important to cultivate if not to feel innately, to develop that sense of irony necessary for fiction. The culture is also very much a storytelling culture. And there is the ferocity of belief when it’s a minority belief. So the Catholics of my youth were easygoing socially and gracious, but fierce about their beliefs. And I think that’s extremely useful for a writer, in trying to think about whether to go along with beliefs or rebel against them.

DP: You have written of thinking of the nuns and priests you knew as a child as “intellectuals.” Has this affected your understanding and treatment of the American Catholic “experience”?

VS: Absolutely. What complicates it was my experience when I came to New York and discovered that Catholics were hardly regarded by anyone as intellectual. The stereotype was exactly the opposite—they were thought of as only as working class. You know: Catholics aren’t intellectual, Catholics don’t read, Catholics love the pope.

DP: You attended Fordham University. Is that what brought you to New York?

VS: Yes, well, I was hell-bound for New York. I came to the Lincoln Center campus to be an actor. That lasted about ten days. I went to my first meeting of people who were in the drama program and thought, “Oh my God—they’re appalling.”

DP: You seem by what you describe in the novel to have a great familiarity with Brooklyn.

VS: I lived there for twenty years. My boys were born there. I also lost two children in Brooklyn and that stays with me as well. Very early pregnancies, but sorrows nonetheless. I think of Brooklyn as a gestational place and very near to my heart. And both my sons live there now.

DP: Photos appear throughout these pages, many of them recurring. What motivated you to make The Powers an “illustrated novel”?

VS: I drove the designer nuts by saying over and over again I didn’t want the photos to be illustrative. I wanted the photographs to be a parallel narrative. Because Agnes is so interested in photography as a kind of mode, and she begins to see it more and more as a mode of witness, I wanted the impact of photography as it began to reveal things in that time. [Critic, novelist, and painter] John Berger calls photography another way of seeing. But more important for my purposes is that it’s another way of witnessing. I felt that the images were kind of a spiritual exercise along the way.

DP: Good fiction should seem to do this as well.

VS: Yes, exactly. That’s my favorite line of Eudora Welty’s, about climbing into someone else’s skin. That notion is what keeps me in the fiction game.

DP: So who influenced you, who moved you, as you were setting out as a writer?

VS: In the beginning it was Faulkner, all the way. I really thought of myself as someone who was drawn to the experimental. But I think that the writers who may have influenced me more stylistically were people like Muriel Spark, who is a kind of abiding force for me. Heinrich Boll – I loved what he was doing with lyrical realism, he was very important as well. And the Russians. I soaked myself in 19th century Russian literature. Tolstoy, Tolstoy, Tolstoy. I love Chekhov, I love Turgenev. And though a lot of people who like Tolstoy don’t accommodate Dostoyevsky, I like Dostoyevsky.

DP: What are you reading these days? Who do you like?

VS: I like a whole mess of people but I’m very fond of Zadie Smith. I think she’s quite immoderate and there’s a lot of work that I don’t like, but I like the range of what she’s willing to try. I like Hilary Mantel. She too had experimental impulses in the beginning and you still see that in her stylization, though essentially those are realist historical novels she’s doing now. They’re certainly powerful, disturbing works. I love Junot Diaz. That’s a really interesting case study of a guy who started with straight-up realism and then moved in a very interesting, not just formal but thoughtful, direction.

DP: You mentioned Faulkner, and readers of Faulkner tend to come down on one side or the other—the experimental or what might be called the more accessible, say, Light in August. Where do you come down on that work?

VS: I love Light in August. But it’s such a seminal book in my upbringing. My high school teacher had us read Light in August. We didn’t have a clue. I plowed through that thing with the most minimal of understanding of even what action was taking place. But at the end of the semester, the exercise the teacher gave us was to write in a Faulknerian voice. And that was the one thing a teacher gave me that was just so liberating. I had already been designated the writer in the family but was saying, “No, not me! I want to be an actor!” But then that made me think I could be a writer. I really enjoyed it.

DP: Do you enjoy reviewing books?

VS: No! The stakes are so high. But as the years go by I do it more as a service. I think reviewing has reached such a low point in our culture. The John Leonard days—the days of the smart, thoughtful review—are over, at least in the mainstream media. There are no more reviews in most papers; they don’t exist. So people read James Wood, they read the New York Review of Books, and that’s not very much. That doesn’t cover a whole lot of what’s being produced. But I also am so sick when I do read a review in someplace important and it’s just plot summary. It just makes me nuts. I know it’s hard to do everything you have to do if you’re only given six hundred words. But still. You have some obligation to talk about where this falls in the context of literature at large.

DP: What is your process? Are you up at six every day and diligent about writing?

DP: What’s next for you? What’s in the works?

VS: I have literally three novels going on—one old one that I’m excavating. It’s all about Catholic ambivalence, so it’s very painful. It’s also a lot about sex, it’s very explicit. So it’s difficult for me. Robertson Jeffers says you can’t write fiction until your parents are dead. My mom’s ninety-five and she’s looking good for a hundred and twenty. I’m a good Irish Catholic girl in so many ways.

VS: Walker Percy. What Percy did with sex was very liberating for me. Same for Muriel Spark, who was what you might call a “loose Catholic.” But she claimed Catholicism to her dying breath. I liked her attitude about it, that we as Catholics give it sex more emphasis than Christ gave it, that a kind of distortion goes on in a way. It’s just very funny to me that I should be sixty years old and still tremble with guilt when I approach the subject of sex, but there it is, that’s the reality, that’s the world in which I was raised. But some of that trembling is good. Awe is always good.

In the Borough of Former Churches