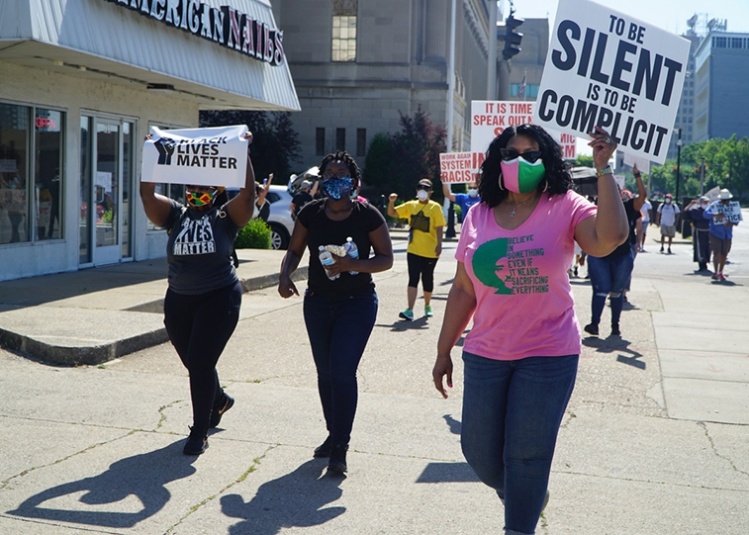 Olga Marina Segura, a freelance writer and the opinion editor at National Catholic Reporter, is the author of Birth of a Movement: Black Lives Matter and the Catholic Church, released last month from Orbis Books. A former associate editor at America Media, Segura is a co-founder and former co-host of the podcast Jesuitical. She was born in Santo Domingo, Dominican Republic, and now lives in the Bronx. Commonweal contributing writer John Gehring spoke with Segura about her book and why the Catholic Church still has a long way to go in confronting white supremacy. This interview has been edited for clarity and length.

John Gehring: Why did you want to write this book and who do you hope reads it?

Olga Marina Segura: I went into the writing process with a very specific idea of contextualizing the Black Lives Matter movement for the Church and to gently accompany white Catholics. And then the pandemic happened. People were getting sick around me. People were protesting police brutality. I wasn’t going to make the book easy or comfortable. Black and Brown people are suffering; we are suffering physical violence and spiritual violence every day. The pandemic radicalized me politically and spiritually.

JG: It’s clear reading your book that the Black Lives Matter movement, especially the women who co-founded it, had a deep personal impact on you. Why do you think this movement has been so effective in inspiring and mobilizing people?

OMS: I think it’s social media. This movement was born on Facebook and it used social media tools to teach people how to organize. It embraced social media when people were still trying to figure that out, and at a time when Millennials were coming of age. These women knew how to use these tools and resources, but they had also been organizing for more than fifteen years. They brought their own advocacy experience to the work. Because of the social media tools they used, I felt as if I could be a part of this conversation about the prison-industrial complex and police brutality. They really figured out how to talk to young people.

Church leaders can learn from that and really jump into this work. A lot of bishops want to have an auditing process first, to meet and vote. But when people are being killed by police violence, inequality, and the pandemic, there is no time for incrementalism. You have to meet people where they are.

JG: You urge leaders at the U.S. Conference of Catholic Bishops to meet with the founders of the Black Lives Matter movement. Why would that be important?

OMS: We know that symbols matter in our Church. Pope Francis was just in Iraq asking for forgiveness, and that was extremely powerful. Imagine our faith leaders sitting down with the founders of Black Lives Matter and saying, “We have messed up. Can you teach us?” That would say to me, a Black immigrant Catholic, that you finally care, you are finally listening, finally doing the accompaniment you like to talk about so much. The bishops are a body of mostly white men and to have them in dialogue with the Black women who started this movement would be extremely powerful.

JG: Are there priests or Catholic sisters that you know who are working with or talking with Black Lives Matter activists?

OMS: At the local level there are a lot of sisters and priests doing that work. We saw in 2020 how many faith leaders aligned themselves with the movement. But the bishops need to get involved. We also know how Catholic money and power work. Our bishops can talk to those people who have influence and who need to be swayed. We need to see that trickle down from the top. There are people who would not listen to me, but would listen to Cardinal Dolan and others who have power and influence.

JG: What would you say to bishops and priests who have publicly criticized Black Lives Matter because of the movement’s positions on abortion and sexuality that are not aligned with Catholic teaching?

We need to be a Church that rejects the very public displays of whiteness that our Church associates with being Catholic.
sharetweet

OMS: What is hard for me to reconcile with these critics is these are people who have never talked about police brutality or mass incarceration. You can’t just ignore all of the issues the movement is talking about and only criticize. There are people who think Black Lives Matter activists want to destroy the family. One priest even called them “maggots and parasites” last year. They don’t want to sit down and understand the history of the movement. They don’t want to learn from these activists.

JG: You write that the goal of your book is “to help Catholics, and all Christians, work toward a Christ-centered, Black liberation.” Can you explain what you mean by that and what would that look like if we achieved it?

OMS: For me, it means becoming a Church that cares about equality for Black and Brown people and all marginalized communities. We know our country has not prioritized marginalized people. We need to be a Church that rejects the very public displays of whiteness that our Church associates with being Catholic, and that centers Catholics of color in order to become the universal Church we think we are. And that means bishops publicly apologizing for the Church’s white supremacy, talking about abolition of police, and meeting with organizers. This is what liberation work means to me.

JG: As you document in the book, the Church has a very long history of entanglement with racism and white supremacy. Until recently, not many people have been talking about this. Why do you think there has been so much silence for so long?

OMS: The reason is that people hold power because of that silence, and our Church has internalized white supremacy. People don’t want to relinquish power. To do actual reckoning you have to ask yourself, “How have I been complicit?” People don’t want to do that. Liberal Catholics also have to ask how they have been complicit. You can’t just say “Black Lives Matter.” We really don’t know how to do this reckoning work. Bishops should be showing us how to grapple with the sin of racism.

JG: You praise Bishop Mark Seitz of El Paso for speaking out strongly against white supremacy and kneeling in protest with a Black Lives Matter sign. But you’re critical of most statements the bishops have released, including the U.S. bishops’ 2018 pastoral letter on racism, Open Wide Our Hearts. What do you think the bishops should be saying that they are not saying?

OMS: The statements should not be so long or written in language that doesn’t resonate with people. I also want to see every white bishop talk about white privilege. I want to see them grapple with the same topics I was grappling with in the book and talk about racial capitalism and how our health-care institutions grew out of exploitation of Black bodies. People are afraid to do this public work because it’s hard and they are afraid to mess up. It’s okay to mess up.

JG: The Black Lives Matter movement doesn’t seem to have as many connections with churches or other houses of worship in the way that civil-rights leaders of the past were shaped by and deeply connected to the Black church as an epicenter of resistance. Is that simply a generational reality or are other things going on?

OMS: This is a movement that was born online and uses social media to share its message. So I think it’s generational. It’s also a decentralized movement that doesn’t have one very established leader or headquarters. But there is spirituality and there are religious folks in the movement, especially after Ferguson. There was heavy church participation there, but it’s so decentralized it means people are not necessarily telling these stories. I think religious media needs to take this movement more seriously. When I spoke with Alicia Garza [a co-founder of Black Lives Matter], she welcomed faith leaders getting involved. I can tell you this movement has made me a better Catholic.

JG: What advice do you have for white Catholics who want to be allies of Black Lives Matter and be anti-racists?

OMS: The number one question that every white Catholic has to ask themselves is, “How have I been complicit in white supremacy, and how can I be better?” You need to ask: “How can I center marginalized people? Can I give other people the opportunity to do this work instead of me? As an editor, am I only giving bylines to white people?” People need to ask themselves how they can shift power. This is difficult because it requires sacrifice, but that is what solidarity is. A lot of people will need to realize they need to step aside. It’s not supposed to be easy.

JG: What are some things in the Church that give you hope when it comes to confronting our history and taking steps to end white supremacy?