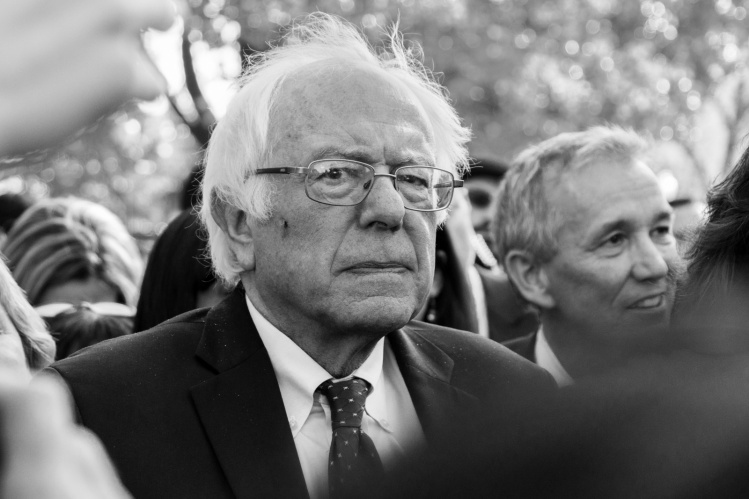 On Super Tuesday, Bernie Sanders had a bad night. His moderate rival, Joe Biden, riding the strength of his dominating win in South Carolina and boosted by endorsements from Pete Buttigieg and Amy Klobuchar, swept the South, and beat out Sanders in Massachusetts, Minnesota, and Texas. Sanders won California, Colorado, Utah, and his home state of Vermont, but finished the night trailing Biden by sixty-five delegates. Sanders and his supporters had hoped to rack up a formidable delegate lead, forcing the recalcitrant Democratic establishment to acknowledge him as a palatable nominee and cementing his viability in the minds of primary voters. That didn’t happen.

I watched these results come in—on a pirated MSNBC stream—with a few friends and my roommate, Dan, who is unemployed and spends most of his waking hours calling and texting for Bernie. A pall fell over our living room as state after state went for Biden, a familiar sense of dread and inevitability. Preternaturally upbeat and optimistic in most circumstances, Dan did not conceal his growing despair, pacing the apartment, darkly muttering to himself. A rolling tide of gloom, resignation, and recrimination overtook my Twitter feed. It was over. “The establishment” had conspired against Sanders. Elizabeth Warren had “kneecapped” the progressive movement. Our enemies were too powerful, too nefarious, too corrupt. The forces of capital had won. Again.

The following morning, light crept back through our windows. Plans were made for trips to canvass in Michigan. Dan returned to the auto-dialer. But I couldn’t get the evening’s pre-post-mortems out of my head. It all felt familiar. The left, of which I am doomed to remain a perpetual partisan, has an intimate relationship with defeat. Defeat is our mother: our sustainer and our burden. “The history of socialism,” writes historian Enzo Traverso, “is a constellation of defeats nourished for almost two centuries.” The affective life of the left is defined by nostalgia, belatedness, memory, and mourning. We cherish a serial history of might-have-beens: if the Communards had stormed Versailles, if the work of Radical Reconstruction had been completed, if the Soviet Union had exorcised its totalitarian demons, if the Spanish Republic had survived the civil war, if the Prague Spring had been allowed to flourish, if Allende had survived the coup, if Mitterand had resisted the call of rigueur, if workers had seized power during this or that general strike, if Bernie had won the primary in 2016, if if if…

This mood, I suspect, is familiar to many leftists. It feeds a bitterly hopeful disposition, which Traverso calls “left-wing melancholy.” For Marxists, every generation of militants is doomed to fail, save the last one. We derive strength and purpose, not despair, from the memory of the vanquished and the worlds they envisioned. In January 1919, in the final days of a failed uprising by German communists, Rosa Luxemburg wrote, “The whole road of socialism is paved with nothing but thunderous defeats” from which socialists, nonetheless, must “draw historical experience, understanding, power and idealism.” The final victory, Luxemburg wrote, would be built on a foundation of every preceding failure. The next day, Luxemburg was murdered by the Freikorps, her body tossed into the Landwehr Canal.

In his final speech, delivered inside the besieged Moneda Palace amid a CIA-backed coup, the socialist president of Chile, Salvador Allende, prefigured his own martyrdom: “These are my last words, and I am certain that my sacrifice will not be in vain,” he said, broadcasting the message over Radio Magallanes, “Go forward knowing that, sooner rather than later, the great avenues will open again where free men will walk to build a better society.” Moments later, Allende put an AK-47 between his legs and shot himself under the chin.

Lurking behind our dour pessimism is, at times, a desire to evade accountability for our own mistakes.
sharetweet

In defeat, the radical left’s morbid historical memory serves as a profound (if perverse) source of comfort. In a telegram to his friend Bill Haywood on the occasion of his execution, anarchist labor icon Joe Hill is supposed to have said, “Don't waste any time mourning. Organize!” (He followed up with another message: “Could you arrange to have my body hauled to the state line to be buried? I don't want to be found dead in Utah.”) The phrase—don’t mourn, organize—is repeated on the occasion of major setbacks for labor and the left. I heard it frequently in the wake of Donald Trump’s election. But generations of leftists have tended to do both at once, deriving discipline and determination from mourning, sacralizing not the victims themselves, but their commitments and hopes, their dreams. At its best, writes Traverso, left-wing melancholy “perceives the tragedies and the lost battles of the past as a burden and a debt, which are also a promise of redemption.”

I’ve been a leftist my entire adult life. I know these stories. I’ve participated in failed union drives, failed electoral campaigns, failed social movements. I’ve watched left governments come to power and lose it, or keep it and be corrupted. Many times I’ve sublimated defeat into conviction; mourning into organizing. But when it comes to practical politics, melancholia is not always a helpful disposition. Conditioned by history to expect defeat—to see it as inevitable, the product of malevolent forces beyond our control—we welcome its arrival with something like relief. There is comfort in this sense of fated doom. We lost not because we did something wrong, but because we did something right in a world that’s wrong. When we acknowledge the awesome might and baleful intentions of our enemies, when we point our fingers at the traitors in our midst, what we seek is not a clear-eyed reckoning of the battlefield, but freedom from guilt for failing to win. Lurking behind our dour pessimism is, at times, a desire to evade accountability for our own mistakes.

A corrective can be found in an essay written by Bertolt Brecht in 1934, from exile in Denmark. Never one to wait and see, Brecht fled Germany in February 1933, weeks after Hitler was appointed chancellor. A Marxist and proponent of “distanced” drama, Brecht was notoriously allergic to sentimentality, both the bourgeois and socialist varieties. For Brecht, intimacy and affect obscured reality; only alienation and discomfort could disclose it. His essays, plays, and poems have a meanness about them, a clear-eyed coldness in the face of injustice that feels especially foreign to twenty-first-century-American ears. The journalist and critic Richard Eder summarized Brecht’s rules for himself as “no pity, no terror and, above all, no purgation.” Cleansing absolution, that elemental aspiration of the American psyche, has no place in Brecht’s vision of art or politics.

[It] takes courage to tell the truth about oneself, about one’s own defeat. Many of the persecuted lose their capacity for seeing their own mistakes. It seems to them that the persecution itself is the greatest injustice. The persecutors are wicked simply because they persecute; the persecuted suffer because of their goodness. But this goodness has been beaten, defeated, suppressed; it was therefore a weak goodness, a bad, indefensible, unreliable goodness. For it will not do to grant that goodness must be weak as rain must be wet. It takes courage to say that the good were defeated not because they were good, but because they were weak.

I often find myself rereading these words in moments of defeat, to ward off the comforts of melancholy. The Sanders campaign has been premised, in part, on the idea of a righteous struggle: against the callous forces of profit and their political enablers. Our cause is righteous. But we should remember that righteousness is not enough to win. And that if we fail, our righteousness will be no consolation at all. The Bernie campaign is good, but if we are losing—to Joe Biden!—then the form of its goodness is “bad, indefensible, unreliable.”

Often it seems everything wrong with Bernie’s campaign can be attributed to something he’s doing right, but for which he’s being punished by Democratic elites or the corporate media (“the persecuted suffer because of their goodness”). Bernie doesn’t win Black voters because they’re too conservative and loyal to the establishment; his supporters are accused of online abuse because they’re particularly enthusiastic and economically desperate; he has fewer endorsements because he’s an outsider and other elected officials are afraid to buck the bosses; he receives little earned media because the media hates him for refusing to flatter the pundit class and their expertise. These things may all be true, but they’re also explanations which preclude solutions; they absolve us, attest to our innocence, and prefigure an alibi for our inevitable downfall.

We can do more than blame the formidable forces arrayed against us. We can be open to good-faith criticism, to new strategies, and to new allies (including those who have no interest in our righteousness or our struggle but who merely want to beat Donald Trump). Rigorous self-criticism is a left-wing value as well, after all. I don’t have all the answers. The way forward for Bernie may require a change in posture, from outsider resentment to magnanimous inclusivity; from hostility to the Democratic establishment to narrating how our program fulfills the highest hopes of the Democratic Party’s egalitarian tradition. Bernie needs to grow his coalition. He can’t do that by naming enemies alone. We must also seek out and embrace new friends. When you’re losing, it can feel good to huddle with the righteous few already on your side. But a willingness to face our present weakness may be a prerequisite for the strength we need to win.

It could be over soon. Some of the projections for the next round of primaries are grim. But the world is in crisis. Everything can change in an instant. And despair is not an option. As organizer Mariame Kaba has said, hope is a discipline; it must be practiced.

Too many times I’ve seen the left preemptively settle for virtuous defeat—accepting that we, like those before us, will be vanquished and remembered fondly for our attempt. But the waters are rising. We can’t wait to see whether ours is the generation that will fulfill the hopes of the radicals who fell before us. Whether or not history has caught up with us, ecology has us in its grasp. In this, I agree with my friend, the author and organizer Jonathan Smucker, who writes, “I take no solace in the prospect of history listing me among the righteous few who denounced the captain of a ship that sank.” We must set our aspirations higher. If we want to save the ship, “we must conspire to take the helm.”