On the Crucifixion, Resurrection, and 9/11
By John Garvey
From the Archives 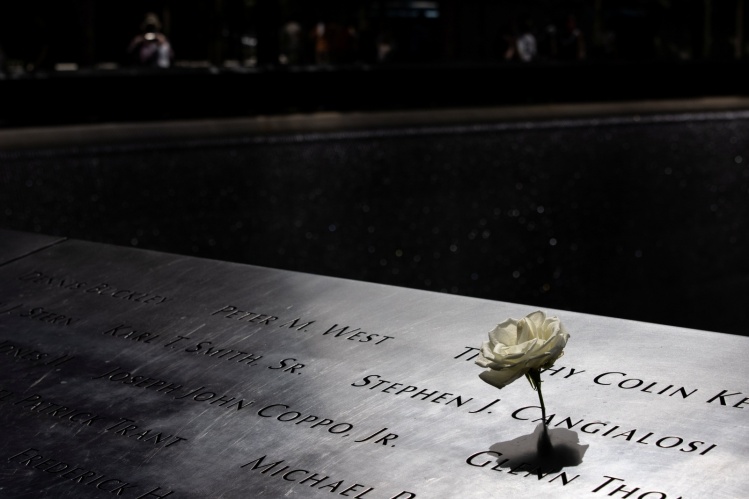 This article was originally published in the October 12, 2001 issue of Commonweal.

On September 11, I heard that a plane had hit one of the World Trade Center towers, and thought it was a terrible accident; within minutes another plane sliced through the other tower, and we all knew that it was not.

The light and air on the day of the attack were beautiful. I was reminded of a chilling passage in Endō’s Silence. During the persecution of Christians in Japan a priest is told that unless he renounces his faith, those he has been serving will be drowned, one by one; and as they are dying, Endō makes a point of the fact that the day was beautiful. The birds sing, a breeze is blowing, the trees are lovely.

I live in eastern Queens. When I looked west down the Long Island Expressway I could see the horizon full of smoke. My wife called to say that she probably couldn’t make it home from Manhattan that evening; the subways she needed weren’t running. She spent the night in Harlem with friends. It wasn’t an easy night to be alone, but I was glad she was safe. When I woke late at night I heard an airplane, and knew it was a military plane. I realized that this was an unusual thought for an American to have.

A couple of days later the streets in our neighborhood were filled with the smell of burning and a haze that stung the eyes, blown in from lower Manhattan. I thought of the attention to breath that is important in meditation practice, and wondered as I breathed not only what I was breathing in, but who. When I mentioned this to my sister she said, “There’s something sacramental about that,” and it is a dark truth.

While we can’t help being obsessed by this mystery of evil, by the hardness of the hearts behind it, there are also mysteries of goodness.
sharetweet

The small Orthodox church I serve as pastor is usually full on Sundays. The Sunday following the horror it was packed. We were lucky, in a way; no one in our congregation was lost. But we do have members who know people who were. Almost any words said in the face of this sort of evil sound pale and trivial. All I could think to say was that while we can’t help being obsessed by this mystery of evil, by the hardness of the hearts behind it, there are also mysteries of goodness. There was the heroism of the firefighters and rescue workers; there were the people who lined up to donate blood in such numbers that the system could not accommodate them; there was the fact that so many of those final phone calls, from the towers and from the planes, were not calls for vengeance, but final declarations of love; and while there are nervousness and anxiety on the streets, there is also a tenderness I have never seen. Gandhi said somewhere that what we usually regard as history is a history of failures, a history of human beings behaving in disastrous ways; but the truer history of the human race is the daily fact of cooperation, help, and even love. That was apparent in many ways after the attack.

The Sunday following the disaster was, on the Orthodox calendar, the Afterfeast of the Elevation of the Cross. It occurred to me that on this side of the grave the cross is the most obvious fact: human beings suffer and die. It is not a small thing that while all the Gospels describe the crucifixion of Jesus, not one describes the Resurrection. This must be understood by faith. We are shown the empty tomb; we do not see him rising in glory. When he appears to the disciples at Emmaus the risen Lord appears as a stranger. There is nothing obvious about the Resurrection, nothing easily seen or grasped; the cross is all too obvious, and we can be stopped by it, we can think that this is all there is to life. Faith in the Resurrection does not cancel out what happens on the cross; the cross is its beginning. Archbishop Anastasios of Albania has said that the Resurrection begins in the cross, and this is where our faith must be, especially in a time when we are confronted with evil and hatred on such a massive level.

It is not, however, a faith that on this side of death everything will be all right. We know more than ever how small and vulnerable we are. And while the vulnerability can make us more tender, it can also make us want to strike out. While some response is clearly called for, if it involves innocent civilians it will harden not only the hearts of our enemies, but our own. As I drove to church toward the end of the week I saw a few planes in the sky and had two emotions at once: things are returning to some sort of normality; and I felt a deep foreboding, one I feel every time I see an airplane now. One woman in our congregation told me that she found it hard to pray after this horror. I thought of St. Paul’s words about the truest prayer: the Holy Spirit prays in us, with groans too deep for utterance. That’s how we are praying now.