Why the Fight for Fifteen Must Succeed 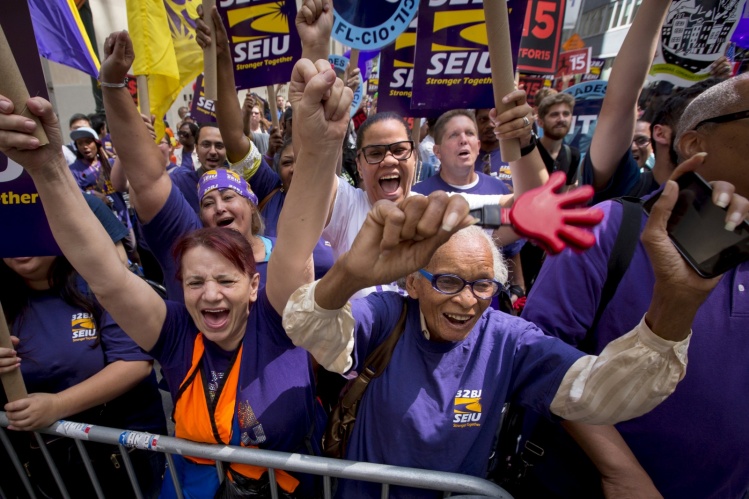 A rally in New York City in support of a $15 minimum wage (CNS photo/Brendan McDermid, Reuters)

In a straight party-line vote, the legislature in my home state of Connecticut last week passed a bill raising the minimum wage to fifteen dollars per hour, to be phased in over four years. In committing to do so, it joined a group of states including New Jersey, Illinois, Massachusetts, New York, Maryland, and California.

The discussion of a fifteen-dollar minimum wage has become part of the campaign for the presidency, with Democratic candidates expressing support almost daily. But most states are not on board. Here in Connecticut, loud voices were raised against the measure. In a May 9 Hartford Courant op-ed, Scott Shepard, policy director of the Connecticut-based Yankee Institute—a think tank that advocates “free-market, limited-government” policies—dismissed the proposed hike as “destructive,” “a disaster,” and “terrible news for the working poor.”

Those who take this view typically raise three main points, and Shepard—a lawyer, by the way, not an economist—aired them all: increased labor costs will be passed on to consumers, who may spurn the products; some businesses will close, while others will leave the state; and rampant firings will ensue. The measure will backfire on its intended beneficiaries, Shepard warned: “rather than a pay increase, they’ll be receiving a pink slip.”

The purveyors of these views act as if such assertions are as unchallengeable as the laws of physics. But they aren’t. Recently I interviewed Jamie McDonald, owner of the popular Bear’s Smokehouse restaurants in the Hartford area, who boosted his minimum wage to fifteen dollars two years ago. McDonald says it’s been a great boon to his business. Employees are far less likely to quit, which reduces the cost and aggravation of constant new hiring and training. Morale is up. And customers notice. “It makes sense from a pure business standpoint,” McDonald told me. “Turnover is way down. Customer service has increased. Quality has increased. You could see the difference within a week.”

Anecdotal evidence aside, there’s no shortage of research that challenges the conventional wisdom. A 2017 study by the Institute for Research on Labor and Employment at the University of California assessed the effects of a proposed statewide wage increase to fifteen dollars per hour. It found that 96 percent of the workers who would get increases are over twenty years old, and nearly 60 percent over thirty; these workers, furthermore, earn close to half their family’s income. (So much for the common criticism from conservatives that most minimum-wage earners are young people not helping support a family.) On the cost side, the study found that a portion of the payroll increases would be offset by reduced employee turnover, automation, and increased productivity, while businesses would absorb the rest by increasing prices—by 0.6 percent annually during the five-year phase-in.

Bottom line? “A $15 statewide minimum wage by 2023 would generate a significant increase in earnings for about 5.26 million workers in California while creating a small price increase borne by all consumers.” Testifying before the U.S. House of Representatives Committee on Education and Labor this February, Ben Zipperer, an economist at the Economic Policy Institute, argued that “the bulk of recent economic research on the minimum wage...establishes that prior increases have had little to no negative consequences and instead have meaningfully raised the pay of the low-wage workforce.” (His testimony, with links to supporting studies, is here.)

Lest one worry that such views are limited to progressive think tanks, let me bring in two mainstream Nobel Prize–winning economists. When a 2014 report by the Congressional Budget Office suggested that a minimum-wage hike might cost 500,000 jobs, Columbia professor Joseph Stiglitz disagreed, asserting that “the CBO analysis underestimated the benefits and overestimated the costs.” In a lengthy 2016 essay in Evonomics, Stiglitz argued that “the rising tide [of the economy] has only lifted the large yachts, and many of the smaller boats have been left dashed on the rocks,” and proposed significant minimum-wage hikes as one meaningful tool to help ameliorate damaging levels of inequality in the United States. And Stiglitz’s fellow Nobel laureate Paul Krugman cites a well-known study that examined what happens when one state raises its minimum wage and a neighboring state doesn’t.  “Does the wage-hiking state lose a large number of jobs?” Krugman asks. “No—the overwhelming conclusion...is that moderate increases in the minimum wage have little or no negative effect on employment.”

To the conventional economic wisdom holds that wage levels should be left to the market, Catholic teaching poses an emphatic dissent.
sharetweet

Are there economists who disagree? Obviously. That’s exactly the point: far from being the slam-dunk that the Yankee Institute and others would have you believe, minimum-wage hikes, in fact, are an issue which Nobel Prize–winning economists can—and do—fall on both sides of. When you are not yourself a specialist, but merely a citizen trying to inform yourself, all you can do is fall back on the views of those who are experts. In doing so, it’s worth keeping in mind that economics is not a hard science. Yes, it uses mathematical tools, but its predictions include a great deal of uncertainty, with macro problems especially. The smaller the problem, the more likely that economists across the political spectrum will agree on how to understand it; talk about large systems, however, and consensus dissolves. Indeed, the very fact that there is a political spectrum to economics reveals its roots not in science, but in political philosophy. How often do you hear about schools of liberal and conservative molecular biology?

It’s interesting to see conservatives who breezily dismiss agreement among scientists on global warming—where there truly is a consensus—turn to the subject of the minimum wage and trumpet a consensus where none exists. If they would apply their global-warming skepticism to minimum-wage hikes, we’d have a more reasonable public discourse. And perhaps a more humane society.

The Catholic Church has provided a strong voice in support of a living wage for well over a century. Since Pope Leo XIII’s 1891 encyclical Rerum novarum (“Rights and Duties of Capital and Labor”), popes have called for wages sufficient to sustain working families. Forty years after Leo XIII’s encyclical, and in explicit reference to it, Pius XI reaffirmed the principle in Quadragesimo anno (1931), stating that “the worker must be paid a wage sufficient to support him and his family.” The U.S. Catholic bishops prioritized the need for a living wage in their 1940 Church and Social Order, and have kept that priority front and center; in a 2014 letter to the U.S. Senate, Archbishop Thomas Wenski of Miami and chairman of the bishops’ Committee on Domestic Justice and Human Development urged lawmakers “to consider closely any legislation that begins to heal our broken economy by promoting decent work and ensuring fair and just compensation for all workers.”

To the Yankee Institutes of the world, whose conventional economic wisdom holds that wage levels should be left to the market, Catholic teaching poses an emphatic dissent. In Mater et magistra (1961), Pope John XXIII explicitly rejected market ideology, insisting that “the remuneration of work is not something that can be left to the laws of the marketplace...[or] the will of the more powerful. It must be determined in accordance with justice and equity; which means that workers must be paid a wage which allows them to live a truly human life and to fulfill their family obligations in a worthy manner.” Two decades after that, John Paul II asserted in Laborem exercens (On Human Work) (1981) that the fundamental soundness of any economic system—and indeed its legitimacy—depends in large part on its ability to provide a living wage. “[A] just wage is the concrete means of verifying the whole socioeconomic system and, in any case, of checking that it is functioning justly,” John Paul wrote. “It is not the only means of checking, but it is a particularly important one and in a sense the key means.”

Christians are not required to be macroeconomists, but to recognize the daily reality of those struggling in an economy that keeps a substantial portion of its citizenry below a living wage, and to gauge one’s moral obligations accordingly—keeping in mind that a society willing to exclude its most vulnerable members, as Pope Francis suggests in Evangelii gaudium (2013), is one where “the socioeconomic system is unjust at its root.”

Here in Connecticut, the Yankee Institute has received substantial funding from the Koch-funded Donors Trust—what Mother Jones calls “the dark-money ATM of the conservative movement” —and espouses a range of conservative political positions, including opposing mandatory sick pay, privatizing public schools through expanded voucher programs, drastically cutting corporate taxes, fighting pollution control and renewable energy, and eliminating the defined benefit from public pension plans. This agenda puts its hostility to a higher minimum wage in context, and reminds us of the ultimately political nature of economic policy positions—including ones taken by those who hide behind the idea that the free market is a kind of natural given, rather than a political system.

It is not a natural given. As Paul Krugman writes, “how much workers are paid depends as much on social forces and political power as it does on simple supply and demand.... [E]xtreme inequality and the falling fortunes of America’s workers are a choice, not a destiny imposed by the gods of the market. And we can change that choice if we want to.” What kind of society do you want to have? Here in my state, our elected representatives have considered the arguments and made the choice for Connecticut. Let’s hope others follow suit.