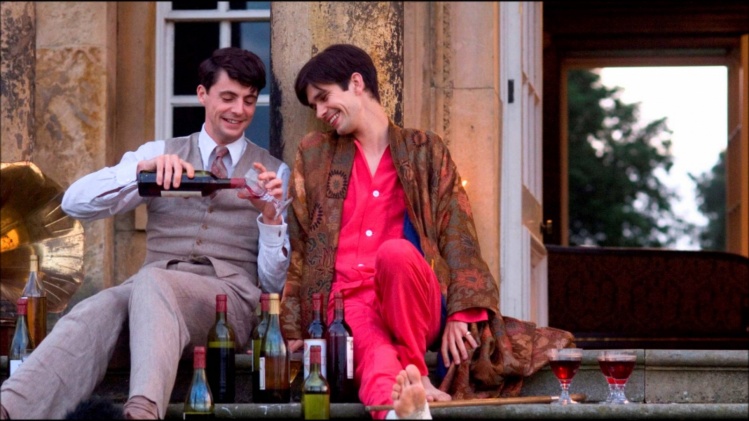 The image of a living tortoise with diamonds affixed to its shell is one that tends to stick in the memory. This unhappy animal figures only briefly in Evelyn Waugh’s Brideshead Revisited, but you will find him in all his glory in the new film adaptation, along with most of the novel’s other idiosyncratic inventions, all perfectly cast and instantly recognizable. There’s Edward Ryder, the inscrutable father of narrator Charles; Bridey, the Flyte family’s imperturbable heir; Boy Mulcaster, the vulgar Oxonian; even the youthful platoon commander Hooper. Though most of these personalities have been reduced to the point of insignificance, their presence throughout the film reassures the disoriented reader, like a chance encounter with old friends in a distressingly unfamiliar world.

Some departure from the original text was to be expected. Unlike the creators of the 1981 BBC miniseries (which I have not seen), director Julian Jarrold and screenwriters Jeremy Brock and Andrew Davies were forced to be economical, condensing plotlines and cutting scenes to tell their story in just over two hours. Their work is artful, beautifully shot, and delicately paced. Here and there the writers have invented new scenes and situations to move the plot forward more briskly, and at first even these choices seem inspired. But inspiration is ultimately where the film founders—it can’t be faithful to the novel’s plot while rejecting its notions of faith. Suffering and holiness, sin and redemption: these are Waugh’s themes, expressed imperfectly and embodied ambivalently by his characters, and resisted by his narrator almost to the end. Jarrold reshapes Brideshead as a fairy tale of doomed romance, an exercise in cliché in which boy meets girl but strenuously resists meeting God.

The joys and confusions of boy meeting boy are still featured prominently, of course. But before flashing all the way back to 1920s Oxford, the film introduces us to Julia (the bland Hayley Atwell) with a quick stop on the ocean liner where she and Charles collide a decade later. Framing the story this way makes everything else a preamble to the lovers’ eventual reunion, even if Julia’s older brother, Sebastian (a wistful Ben Whishaw), is far more engaging—not to mention prettier. The screenplay races to bring him and Charles (the handsome Matthew Goode) together at Oxford. This Sebastian is direct and affectionate, sensitive and misunderstood; on hearing Charles is an artist, he coos, “Would you like to paint me?” In the whirlwind, his dark side is all but lost—his evasiveness, his self-absorption, even his alcoholism are all symptoms not of immaturity but of repression. He has been remade as a free-spirited gay man forced into self-destruction by his restrictive religion and his unfeeling mother. It’s a twenty-first-century perspective—call it Brokeback Revisited—and certainly there is truth in it. But Waugh’s Sebastian was not so easily compartmentalized.

Not until halfway through the novel, after his ambiguous relationship with Sebastian has played out, does Charles announce, “It is time to speak of Julia.” As the siblings are both “forerunners” to Charles’s true romance, there is no need for them to compete. The movie, unwilling to accept Waugh’s premise, invents its own drama by forcing the three protagonists into a trite love triangle. So, Julia accompanies the boys to Venice, and there Sebastian spies her and Charles canoodling in the moonlight. As shot by Jarrold, it’s a beautiful scene, but it belongs in some other story; the contrivance is fatal to the integrity of this one.

Contrivance, some would say, mars the novel as well, particularly in Charles’s conversion to Catholicism. The film avoids that issue by shifting the paradigm entirely. Determined to ground its conflict in the material world, the screenplay gives Charles a Cinderella backstory and exaggerates his fascination with Brideshead; his problems now stem from his worldly desires, not from his spiritual poverty. In fact, his atheism—and he does insist on being called an atheist, not an agnostic, as in the book—may be his salvation, as religion is the source of the Flyte family’s deterioration. This approach is both intellectually bankrupt and dramatically deficient. Charles, as protagonist, is rendered utterly passive, standing by with pursed lips as things fall apart around him. He need not change and does not change; the shockingly unsympathetic husband and father that he becomes in the novel’s second half never appears. The story lurches forward, propelled by nothing, taking ever more ridiculous liberties with the novel—Rex Mottram is so villainous he might as well have horns; Anthony Blanche spouts nonsense about Charles’s destructive “hunger.” Julia is finally motivated by pride, not by grace, and the ending feels more like a rewrite of Moby-Dick, with Charles the lone survivor of the wreckage.

The film’s distorted perspective on religion is most injurious to poor Lady Marchmain (Emma Thompson). In Waugh’s hands she is a thoroughly complex figure, imperfect, even pathetic, but more sinned against than sinning, and Thompson tries her best to imbue the character’s ludicrous sermons with a touch of that complexity. A sanctimonious tyrant who declares, “I act only as God directs,” the film’s Lady Marchmain represents the faith that haunts her children—officially Catholicism, but in practice a twisted cult of mother-worship. She hears the confession of her tortured son as he kneels before her in tears. After dinner, she leads her children to the chapel to sing the “Salve Regina” around a statue of the Virgin. An ugly “Madonna and Child,” with a square-jawed Mary flanked by wan angels, hangs in the main hall of the estate—a gift to Lady Marchmain from her husband, we are told. “God, I loathe that painting,” Sebastian growls. What reasonable person, atheist or aesthete, would not?

Waugh employs Marian imagery, too, but he compares Lady Marchmain to Our Lady of Sorrows, the grieving mother whose heart is pierced by the swords of her child’s pain. “Any failure in my children is my failure,” she tells Charles. The film accuses her of destroying those children, and even her wayward husband, through her exacting moral standards; she is a monster, and Brideshead is her lair. Only Cara, Lord Marchmain’s mistress, is generous enough to suggest that her rival may also be a victim: “Her God has done that to her,” she tells Charles gravely.

Meanwhile, in Venice, the exiled Lord Marchmain (Michael Gambon) complains that “the Italians seem unable to paint anything half-decent without putting Christ dying in it.” The movie has the opposite problem—it identifies “guilt” as a byproduct of Catholicism, but can’t quite grasp the concept of sin, much less redemption. Lord Marchmain’s deathbed conversion is not motivated by the anguished hallucinations and desperate fear that precede his death in the novel. The only sin the film’s Marchmain accuses himself of is allowing “that woman” to “crucify my son.” For the screenwriters, the crucifixion functions merely as an ironic parallel to Sebastian’s suffering; elsewhere Christ is reduced to a babe in arms. Julia wears a plain cross around her neck, but when Charles’s eyes linger on it he seems mainly to be admiring her décolletage. And the only reference to the Eucharist is a wry toast from Sebastian: “Drink in remembrance of me.”

Jarrold uses these images poorly, but always creatively; if he had challenged himself to tell the story Waugh wrote, the results might have been enlightening. Take, for example, the moment after Sebastian sees Charles and Julia in each other’s arms. He follows them into a Venetian church and finds Julia kneeling before a painting by Bellini. It is yet another image of Madonna and Child, but off to the side, the bare-chested, arrow-studded St. Sebastian gazes mournfully at the viewer, reflecting the betrayal on the face of his young namesake. The parallel is subtle, even clever, but it communicates nothing of what Waugh understood about suffering and grace. Like the immature Charles, the film refuses to accept the sincerity of Sebastian’s faith or consider that it could be anything but harmful to his health.

The film, like the book, ends with Captain Ryder stopping in to the chapel at Brideshead. His voice-over asks, “Did I want too much? Did my own hunger blind me to the ties that bound them to their faith?” The question is nonsense; the film can hardly pretend to be interested in the answer. Standing before the statue of the Blessed Mother, Charles moves to extinguish a votive left burning there. He changes his mind—is this growth?—and leaves. The image blurs. Light fills the screen, illuminating nothing.

Related, from the dotCommonweal blog: The Spoils of Waugh

"a virtuous pain to read"