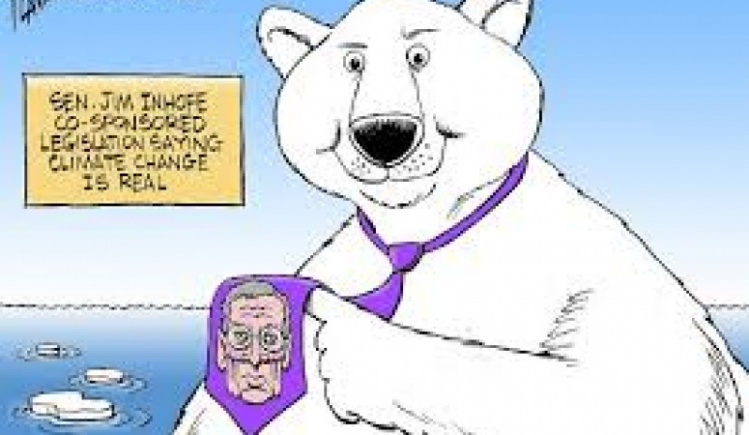 "It is the sense of the Senate that climate change is real and not a hoax." Let it be noted that the most vocal of the climate-science deniers in the U.S. Senate this week joined ninety-seven of his colleagues in resolving so. This otherwise meager concession to reality might have signaled a significant coming around on the part of the senator, Oklahoma’s James Inhofe, who three years ago published his seminal The Greatest Hoax: How the Global Warming Conspiracy Threatens Your Future. Might have, except that in conceding one point he made sure to hold fast on another: That “man can't change climate" and that climate has always changed—there’s “biblical evidence” of that. “The hoax,” Inhofe declared, “is that there are some people who think they are so arrogant to think that they are so powerful that they can change the climate.”

Which might explain why he didn’t join the fifty senators (necessarily including some Republicans) subsequently resolving that humans “significantly contribute” to warming. Never mind that sixty votes were needed for approval: that it won support of even half the chamber came as better-than-expected news to the resolution’s sponsor, Hawaii Democrat Brian Schatz, and even Barbara Boxer, top Democrat on the Senate's environmental panel, declared victory: “It means that there's a softening of the attitude of the deniers.”

None of this even begins to imply imminent action, of course; the resolutions were part of the maneuvering around the more politically urgent issue of the Keystone Pipeline. Which makes the celebratory remarks seem like another kind of denial: Symbolic votes to reject obvious falsehoods and to support obvious facts are taken as measures of progress, softening attitudes on hard realities as victories.

Don't count Jonathan Chait among the satisfied. He is of the opinion that Inhofe (and the considerable number of policymakers who side with him) shouldn’t even hold public office:

Inhofe not only maintains control of the chief environmental committee in the upper chamber, but also managed to hold 90 percent of his party with him on a vote to affirm his deranged beliefs ….  The Republican Party confidently and forthrightly rejects the firm conclusions of science on a major public-policy question. Isn’t that a completely disqualifying position?

At least you could say similarly “softening attitudes” have been sighted in places like Michigan and Kansas, states whose governors are acknowledging, grudgingly and not without opposition, that easing access to firearms for domestic abusers might not be such a great idea. Or that revenue might in fact be needed to maintain public infrastructure like bridges and highways. Or that some new taxes and some deceleration in tax cuts could be required to fund basic governmental operations and education. Perhaps with gasoline prices sinking, it's time to increase the gas tax, which hasn't happened since 1993. The Obama administration hasn't mentioned it--but Inhofe has. It could encourage people to take mass transit instead of drive, or even purchase more fuel-efficient vehicles. There's no biblical evidence of it, but that's just another thing he doesn't have to know about.

Our Spring Books issue is live