America in the Meantime

‘Where We Are: Selections from the Whitney’s Collection’
By Griffin Oleynick
Arts
Spirituality
Domestic Affairs 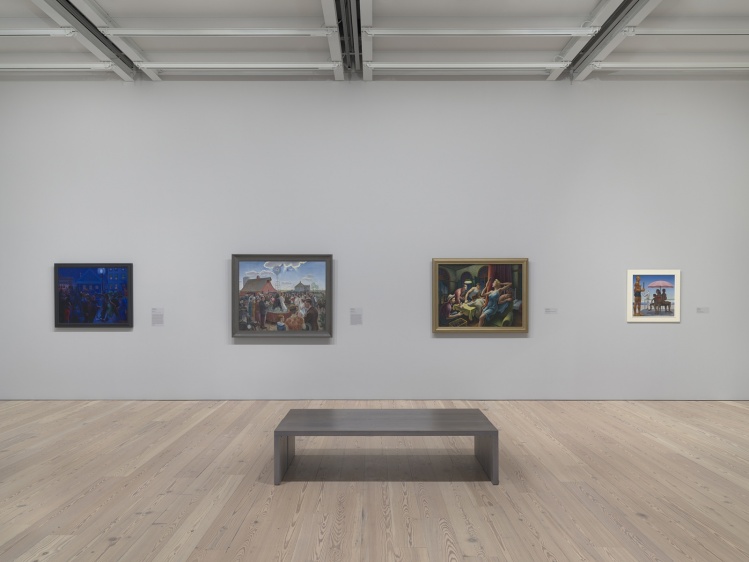 Installation view of the Where We Are: Selections from the Whitney’s Collection, 1900-1960 (Photograph by Ron Amstutz)

Part of a visual pilgrimage toward Easter, this piece is the second in a series of spiritual meditations by Griffin Oleynick, who will visit a different art gallery each week through the season of Lent. Catch up on his first piece, on an exhibit at The Morgan Library and Museum here, and check back next Sunday, when Griffin vists the Frick Collection.

Where We Are: Selections from the Whitney’s Collection, 1900-1960, on view at the Whitney Museum of American Art in New York City

In the immediate aftermath of the 2016 presidential election, a theologian friend of mine quipped that Donald Trump’s victory over Hillary Clinton could best be described as “apocalyptic.” She didn’t mean that the world was ending. Rather, as a New Testament scholar with a keen ear for modern echoes of Biblical Greek, she was using the term in a way consistent with its etymological origin: an “apocalypse” is literally an “uncovering,” or “revelation,” a singular event that enables us to see the hidden things we couldn’t see before. In this sense, Trump’s election tore the wool from our eyes: no longer could we pretend to live in a country free of the social demons of racism, sexism, and xenophobia, nor could we continue to ignore the gaping economic wounds that further fracture our body politic. This Lent, our national political condition grimly mirrors our liturgical one: we find ourselves and our nation lost and broken, wandering through a tortuous and bewildering desert, with no apparent end in sight.

Where We Are, an ongoing exhibition that first opened at the Whitney Museum late last spring, offers a forceful response to the national sense of disorder and displacement that has come to define the Trump era. Its five sections flow like a visual essay, with clusters of paintings, drawings, photographs, and sculptures from the Whitney’s permanent collection narrating the complex history of twentieth-century America from a multiplicity of perspectives.

The exhibit takes its intellectual and spiritual cue from the impassioned, inspiring verses of a single poem, W.H. Auden’s “September 1, 1939.” Written just after Auden’s controversial move from England to New York City at the outbreak of World War II (and just before his anonymous appearances as the Commonweal columnist “Didymus” — more on that below), the poem’s title recalls the infamous date of Germany’s invasion of Poland. The verses seem like they could have been written yesterday. Seated in a Manhattan dive bar as the “unmentionable odour of death / Offends the September night,” Auden fervently excoriates the sins of greed, cowardice, and moral indifference that precipitated democracy’s decline and enabled Hitler’s rise. He then calls on his listeners, “Beleaguered by the same / Negation and despair,” to join their voices with his and “show an affirming flame.” With the poem printed in its entirety on the entrance wall, Where We Are implies that as Americans we now find ourselves in an analogous situation, and demands that we take a stand.

Despite its clear frustration with our current political impasse, Where We Are remains cautiously hopeful about America’s future. Basic American values, like home and family, work and spirituality, are celebrated just as our historic injustices are identified and condemned. Iconic paintings by big-name artists, such as Edward Hopper’s 1921 New York Interior and his 1934 Cape Cod Sunset, are paired with lesser-known works by figures like James Castle, the deaf, self-taught artist whose graceful drawings of home interiors and landscapes, sketched with a mixture of soot and spit on the backs of discarded papers, share a similar reverence for silence and interiority. Equally moving are works grounded in a longing for social justice: Paul Cadmus’ 1951 painting The Bath, inspired by the naturalism and perspectivism of the Italian Renaissance, lends nobility and grace to erotic male relationships, just as James Van Der Zee’s 1920s group photographs of African-Americans, including the Harlem Swimming Team and attendees of a Marcus Garvey rally, reveal the dignity of black lives. Composed during a time when these groups were forcibly marginalized by the dominant American culture, such works inspire us to continue the fight for justice today.

The site and architecture of the Whitney Museum encourage visitors to step outside the exhibition gallery and look into the heart of the city. As we find ourselves standing upon a series of interconnected outdoor terraces that rise amidst the dramatic backdrop of the Manhattan skyline, our gaze is drawn to some of New York’s most iconic, historically significant structures. What values do the Empire State Building, the Statue of Liberty, and the newly rebuilt World Trade Center communicate? What kinds of people inhabit these spaces?

Despite its clear frustration with our current political impasse, Where We Are remains cautiously hopeful about America’s future
sharetweet

As I visited the museum late on a Friday evening in February, I was struck by the spirit of relaxation, togetherness, and even joy present among the many visitors, bundled up against the chill of the night as they wandered across the windy platforms. I had expected to feel a kind of apocalyptic rapture akin to the heightened tone of Auden’s “September 1, 1939,” in which the night becomes an occasion for radical political ruminations and fevered ultimatums (“We must love one another or die,” Auden wrote). Instead, the dazzling spectacle of the city lights left me calm and serene. As if on a movie set, all around me couples huddled romantically while groups of friends laughed, posed, and snapped selfies. Entranced by our magical surroundings, had I and my fellow museum-goers missed the urgent message of Where We Are?

I had visited the exhibit and stood on the same terraces once before, during the summer of 2017. On that day Auden’s poetry, combined with the exhibit’s presentation of a generous, open-hearted America, moved me deeply. I wanted to act boldly, to serve the victims of injustice, to build America anew. I was glad that Where We Are affirmed, even encouraged such passion. Yet now, almost a year later, I was unable to summon the same eschatological energy. Trump is still president, and the world hasn’t ended. We are all still here, and the just America we long for seems a far way off. How, then, might we live in the meantime?

Auden himself offers a thoughtful and poignant response to this very question. Upon rediscovering his Anglican faith in the early 1940s, he repudiated the bold, apocalyptic lyricism of works like “September 1, 1939,” even excising them from his Collected Poems. As Anthony Domestico explains in a recent book, during these years Auden pivoted instead towards a quieter, more reflective style rooted in  his reading of Christian theology. In “Memorial for the City” and “For the Time Being,” a portion of which was first published in Commonweal, Auden suggests that we are not called to bring about the City of God in any immediate sense. Rather, as Christians we must learn to learn to dwell peaceably in the City of Man. Accepting the world just as it is, we are called to discover the goodness and meaningfulness of it all. Even in the face of sin and death, where “our past is a chaos of graves / and the barbed-wire stretches ahead,” Auden assures that we “are not to despair.” Whatever the future, Auden asserts, in Christ we are given the unalterable promise of our salvation.

If for Auden poetry, and by extension all art, is not intended to galvanize human emotions and exhort us to create a new world, what political purpose does it serve? With a series of brief columns written for Commonweal in 1942 under the pen name of Didymus, Auden suggests a new task for Christian art. In these “Lecture Notes” he argues that poetry and painting must instead hold a mirror up to our fragile selves and show us who we really are. Art thus becomes not a series of grand public gestures but rather a slow interior journey, a “process of discovery” by which we may gradually come to discard our tightly held illusions about ourselves and the world. Only then are we able to embrace the moral freedom that each of is given freely by God. It is a quieter, humbler understanding of the role of art and the artist in society.

One painting displayed in the final section of Where We Are seems to mirror the same sublime beauty I witnessed during the night out on the Whitney’s terraces, just as it picks up on Auden’s Christian intuition about art as a pathway to human freedom. Joseph Stella’s monumental Brooklyn Bridge, composed in a form that recalls church altarpieces, powerfully presents the bridge’s famous Gothic arches set within an illuminated cityscape whose colored skyscrapers glimmer against the black of the night sky. Stella invites us to behold the city as a space of wonder, where human structures are suffused with a vitality and dynamism that suggest the divine presence of the Spirit hovering intimately and watchfully about them. The painting shows us the majesty not of the city as it should be, or as it will be, but as it is, right here and now. It is the same city we all inhabit, the ordinary space of our daily lives, where God grants us the freedom to live and move and have our being. Stella’s choice of a bridge as the symbol for the city is instructive, especially in our current climate of fear and division: as Pope Francis once reminded Donald Trump, bridges are the very structures Christians are called to build. This Lent, we may yet meet with further disorientation, frustration, and confusion, but as Auden reminds us, it is hardly a reason to despair.