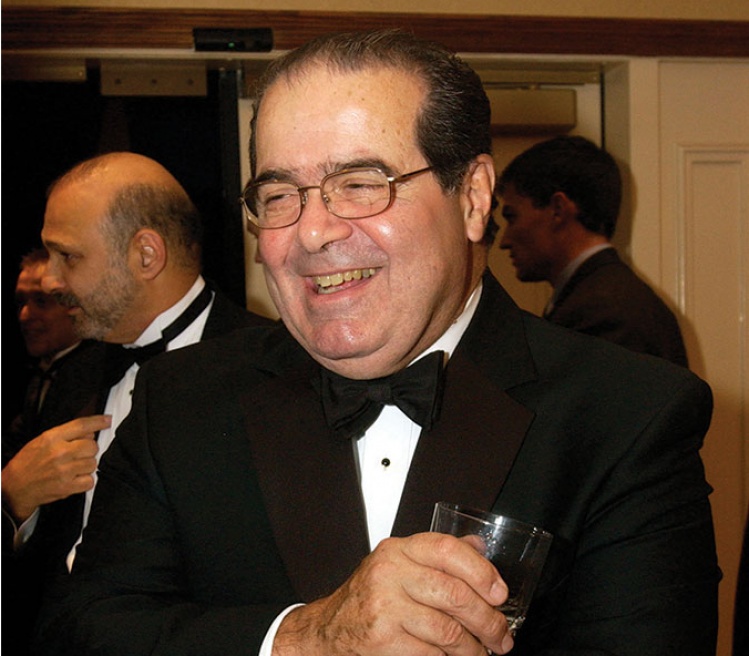 Is it relevant to his work as a Supreme Court Justice that Antonin Scalia was a lifelong and committed Catholic? How significant is it that in 2009, when Justice Sonia Sotomayor took her seat on the Court, there was, for the first time in U.S. history, no Protestant on the Court? She was the sixth Catholic. The other three justices were Jewish. This fact seemed extraordinary at the time to many American political and religious historians. What did it mean? Did it matter? And in what sense did it matter? There was little agreement as to whether and how it might matter, perhaps because we would have had to significantly revise our histories if it did. With Justice Antonin Scalia’s death and his replacement by Justice Neil Gorsuch, there are now five Catholics, three Jews, and one Protestant.

One who thought it mattered was law professor Geoffrey Stone. He speculated in a couple of blog posts in 2006 and 2009 that the recent record in cases before the Court on a range of social issues, but particularly relating to same-sex marriage and abortion, showed that conservative Catholic positions on these issues might be being reflected in the decisions of the Court. He particularly called out the Court’s 2007 decision in Gonzales v. Carhart. In Gonzales, the Court upheld a state statute banning certain abortion procedures just seven years after it had struck down a substantially similar federal statute. Scalia’s biographer, Joan Biskupic, asked Scalia about Stone’s comments. He responded angrily: “now he knows that that’s a damned lie…it isn’t religion that divides us anymore.” Acknowledging that Justice William Brennan, a previous Catholic justice, had voted with the majority in Roe, Stone concluded his second post: “of course, none of this necessarily ‘proves’ anything. The five Catholic justices appointed by Republican presidents since Roe often vote together on a range of issues having nothing to do with their religion.” So why did he bring it up?

While most scholars agree that who you are does—and even should—affect your work as a judge, how religious affiliation affects judging is not agreed upon. George Kannar has suggested that what’s Catholic about Scalia’s judging is the approach he takes to texts, one rooted in a distinctly mid-twentieth-century American Catholic interpretive practice. Others have suggested that Catholics are apt to rely on natural law, bending U.S. law to serve a sectarian purpose. Taking a sociological view, one might argue that Jews and Catholics dominate the High Court because they come from immigrant communities that have valued success in the professions—including the legal profession—as a route to social acceptability, and that it is their ethnic, rather than religious, identity that is significant and possibly more influential in their judging. As for the connection between religion and law on questions relating to sex more generally, two recent books challenge the notion that it is historically accurate to assign to religion the cause for conservative (misogynist) state regulation of sex. Historians Joan Scott and Marie Griffiths, and others, have shown in recent books that there is a long, secular tradition of using official power to control women’s bodies. The history of the legal regulation of sex is always one of mixed religious and secular motivation—and of the impossibility of separating the one from the other.

Scalia repeatedly stated that his positions as a Catholic were not relevant to his work as a judge. He personally supported the death penalty and took that to be the orthodox Christian position (whatever the Vatican might say) and he opposed legal abortion; but he was always careful to say that the states should be free to decide for themselves whether to allow abortions, without interference from the courts. He regarded his work as a judge to be to apply the law without influence from his private positions. He said that there was no “Catholic way” to be a judge. I agree with him. Our differences are not rooted in religion. Moreover, he was of a generation for whom the stakes were very high in overcoming difference in the name of universal justice.

Scalia Speaks: Reflections on Law, Faith, and Life Well Lived is a curious volume and a necessarily limited introduction to his work and thought.
sharetweet

Scalia Speaks: Reflections on Law, Faith, and Life Well Lived is a curious volume and a necessarily limited introduction to his work and thought. It is a posthumously published collection of Scalia’s occasional speeches in a variety of settings, forty-one of them, necessarily selected without his cooperation or guidance. For the most part, they are quite short and designed for a general audience—audiences ranging from high-school and college commencements to the Marine Corps and the National Wild Turkey Federation convention. Some are quite slight, others more substantive. They are grouped into six sections: “On the American People and Ethnicity,” “On Living and Learning,” “On Faith,” “On Law,” “On Virtue and the Public Good,” and “On Heroes and Friends.” The volume concludes with seven tributes to Scalia. These speeches were selected by Christopher Scalia, the justice’s son, and Edward Whelan, one of his former law clerks. As his son recounts in the introduction to the volume, Scalia gave hundreds of speeches over his career, all over the world. He delivered many from a standard outline. Those they chose reflect the range of these occasions and the variety of his topics.

It is important to remember, as I said, that Scalia did not select these texts himself or present them for publication. The two editors have engaged in what is clearly a labor of love. I honor that. Many will read the book in that spirit. There is a real sense in which Scalia is not responsible for some of its weaknesses. But it is repetitive and too long. When I finished the volume, I felt that I could sit down and write a good Scalia after-dinner speech. I could speak of my Jesuit education at Xavier High School in New York City, of my learning to shoot in the school’s military program, of carrying my gun to school on the subway, of my beloved Irish-American wife, Maureen, of my nine children, and of my love for America, for George Washington, and the Constitution. I would bring out well-loved quotes—from the Federalist Papers, Tocqueville, and A Man for All Seasons. I would be a bit cantankerous about liberals, especially those espousing a “Living Constitution.” I would be brief, conscious that many after-dinner speeches are windy and self-indulgent. I would exhort my audience to love the Constitution and rank good character high.

These speeches are revealing of the justice’s sense of careful self-presentation on public occasions, including his sense of rootedness in the Catholic Church, but they do not reveal a man with a particularly sophisticated or sectarian agenda on theology or religion. More importantly, putting aside a certain pugnaciousness, they do not reveal a man with extreme positions on the law. Indeed, his originalism and textualism are shown to be far more pragmatic than ideological. He was a patriot. He believed in the separation of powers and the separation of church and state. He loved being a judge.

My favorite of these speeches is one he gave on May 8, 1997, the annual Day of Remembrance commemoration held in the rotunda of the U.S. Capitol, titled here “The Holocaust.” He leaves the bombast aside, speaking softly, even shyly. Here one hears him invoke God as a Christian, not as a judge: “what does the Lord require of thee, but to do justly, to love mercy, and to walk humbly with thy God.”

A great deal has been written about Antonin Scalia, much of it angry and partisan. This volume does not seem to be the occasion to rehearse that debate or take a position in it.